Idea Behind the Book

The Seductress is the third in my Regency mystery romance series.  I’d written one mystery in my life before that and no Regency stories. So of course I had to go ahead.

I started off thinking about how women were treated in the past and how they managed in a world where they had very limited rights —and that I wanted to do a different kind of Regency that was still historically correct.  By the time I finished The Seductress, I knew my small corner of Regency England reasonably well (not that I don’t have to look up titles and who is called what and when EVERY time I start a story or I’m in trouble.)

Emily isn’t like her sensible, previously widowed and independent cousin in the previous stories, the one who helped solve murders.  But I don’t like idiotic heroines so I had to try to make a younger, romantic girl who makes mistakes not an idiot.  She tries to be sensible when she decides to marry the titled gentleman her Mama desires for her daughter.  It’s the only way she’ll have any security in her world. And she has to be smart when the Earl she’s just accepted in marriage is found dead.   Meanwhile there’s the previously untitled, penniless hero who is under suspicion when he becomes the new Earl… 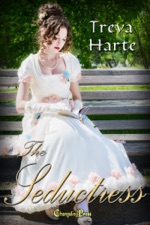 Get the book at:

Miss Emily Whitethorn once vowed to marry only for love, but when she finally accepts the reality that she must follow her mother’s demands and marry a titled gentleman, her plans turn to seduction. The first person on her list of eligible bachelors is Lord Northenly, the Earl who proposed to her years ago.

If only his younger and untitled half-brother Kit were less distracting, and the Earl more alluring! But everything changes when both brothers propose, only to have Lord Northenly die suddenly — after showing Emily, in a most frightening way, that she could never marry him.

Of course the current Lord Northenly’s death makes Kit both a suspect and the next Lord Northenly — and leaves Emily a suspect, as well. There’s only one solution to their immediate problem. But will a hasty marriage save them both, or prove to be their undoing?