Monira finds herself stranded with a human male who turns out to be good for more than battle. 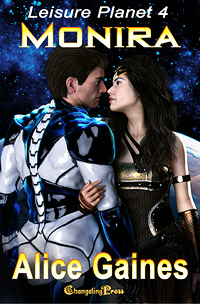 Captain Jason Archer of Tartus is stranded on an undeveloped planet with a Casoran warrior named Monira. Although their first encounter is in battle, they eventually discover more pleasurable ways of dealing with each other. But were they also meant to fulfill each other’s dreams?

Also available at other retailers:

The Amazon had to have been here. Though he hadn’t found any more of her signs, the scene had changed. Now something that looked like a rolled-up blanket sat near the trunk of the tree, and a sword lay nearby. An ancient weapon. One that suited an Amazon. He bent to pick it up and admired its beautiful design. The blade appeared to be forged steel — again, a material he’d learned of in his studies. The hilt was a golden color with carvings of birds as decorations. It felt right in his hand, although he had no real way of evaluating its “rightness.”

He’d studied such things and had seen centuries-old specimens in museums, but he’d never hefted one himself. Once, he might have imagined himself a warrior, before fighting turned into something more like a video game than violence. Center a view-site here, push a button there, and death rays and bombs went off somewhere else. Disgusting, really, how easy it had become to kill. Besting an opponent with something like this, where you looked your enemy in the eye and smelled his sweat and blood — seemed much more noble.

He’d stepped out into the clearing and, wielding the sword with both hands, he slashed through the air around him. The weapon almost made a singing song as he did, and a charge of energy coursed up his arm toward his heart. Yes, this was how a man was created to fight, with the strength of his own body.

“Over here, male,” a voice said from behind him. Female. He didn’t have to turn to know the Amazon had found him, and here he stood holding her sword. Busted.

He did turn, though, and the sight that greeted him knocked the air out of his lungs. She was truly magnificent. Nearly as tall as him and all sleek muscle. She wore full battle gear, just like the Amazons of ancient times. Leather encased her torso and hung downward over her upper thighs in a skirt of sorts. Ornate metal bracelets ringed her upper arms — not just decorative but to ward off the blow of a sword. Boots came up to her knees.

But what really nailed him were her eyes. Huge and dark brown. Like someone else’s, although he couldn’t place them, and he sure as hell didn’t have time to contemplate that now.

While he stood staring, she drew a sword from the scabbard at her side and took a fighting stance with both hands firmly wrapped around the hilt.

He held his sword out in her direction. “I found this. I was only trying it out.”

“Lift your weapon, male,” she answered.

“You mean this isn’t yours?”

She didn’t answer but stared at him as if her glare could kill. It would certainly frighten a lesser man. A band of gold circled her head, again protecting her forehead and skull from a sword. He had no such protection.

“Don’t be silly. Males always want to fight. That’s why they had to be subjugated.”

“You can stop calling me ‘male.’ My name is Jason Archer, Captain of the Wanderer. I’m from planet Tartus in the Spider Galaxy.”

“Then, defend yourself, Jason Archer of Tartus.”

That didn’t calm her down. Quite the opposite. She let out a shriek and charged him. He got his sword up just in time to block hers from coming at his head. He’d had some training in hand-to-hand, so he kicked out his foot toward her belly, pushing her back.

Now he took a more useful stance for battle — weight balanced on the balls of his feet so he could maneuver quickly. And he held his sword as she did hers.

When she came at him this time, she bent low. She swung her weapon in an arc, aiming to take out his legs, but he jumped, just clearing the blade. When he came down, he gave an elbow hard to the back of her neck, sending her reeling forward.

Instead of falling on her face, she did a sort of roll and popped back onto her feet. “That’s a coward’s way to fight.”

“I’m not used to swordplay. I do what I have to to defend myself.”

“Then I’ll teach you how to wield a sword.” She came for him again. When he lifted his sword, she swung hers in a wide arc. The blades clashed with a ring loud enough to hurt his ears. The sting in his arm from the blow hurt a whole lot worse than that. So badly, in fact, he dropped his weapon.

Now she stood only feet away, her sword still up and pointing right toward his heart. All he could do was step backward.

She kept coming, and he kept moving away from her. This woman might actually kill him. All for no good reason. He would remain calm… think of a way out of this… find some other type of weapon… appeal to her sense of fairness. Anything.

Then his foot caught on something, and he tripped, falling on his back, now totally helpless.

She stood over him, one foot on his chest and the point of her sword just over his voice box. He didn’t move a muscle. Hardly dared to breathe. Her beautiful face and eyes could be the last vision he’d take to his grave.

After a long moment, she chuckled and returned her sword to its scabbard. Then she reached a hand down to him. “You don’t frighten easily. I’ll give you that, male.”

He hesitated before taking her hand. How could he tell if he could trust her? But eventually, her smile turned to a smirk, and he’d have to relent if he was to save any of his male pride.

She helped him to his feet. “Retrieve your sword.”

Alice loves to get mail at authoralicegaines@yahoo.com. You can sign up for her newsletter at http://eepurl.com/boeGm9.