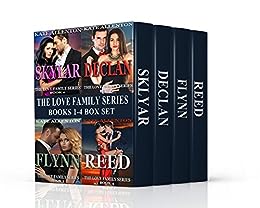 Skylar (Book 1)
Shop owner Skylar Love and her family have lived on the same island her ancestors discovered several centuries ago. Her life isn’t perfect, but it’s hers. After dumping her lying, cheating boyfriend, she isn’t surprised when her brother tries to bribe their best friend to take her out on a pity date.

With plans to build a lab on the Island and move back home, he finally talks her into a date. When the date goes south and someone tries to kill them both, winning her heart takes a backseat to keeping them both alive while they figure out the mystery of who’s behind the threat.

Declan (Book 2)
Sherriff Declan Love is a straight arrow. Everything is black and white in his line of work. Using his ability of a human lie detector to catch criminals has made his professional life a piece of cake. So naturally when his sister’s best friend, Olivia Parks, starts to avoid his questions and is seen around town on dates with men he doesn’t know, he’s left with little option but to find out what she’s up to, if nothing more than to save her from the heartache sure to follow.

Shop owner Olivia Parks is tired of sitting on the sidelines waiting for Declan Love to ask her out. When her best friend, Skylar Love, starts planning her wedding, it’s even more apparent that Olivia will always be stuck in Declan’s friend zone. Time is ticking to find the perfect wedding date, and she is seriously out of practice. With the help of friends, Olivia is determined to prove to herself once and for all that she can be a desirable woman, even if Declan is too blind to notice.

Flynn (Book 3)
Flynn Love knows a thing or two about women. When he loses a bet to his buddy and is forced to play tour guide and babysitter to the man’s little sister, he’s warned she can be a handful and is always attracted to losers. Flynn has one job: show her around her new home on Love Island and scare away the creeps while winning her over with his charm. Should be a piece of cake, right?
Wrong.
Mia Stewart has had a tough time of late with break-ins at her home and a mugging that sent her to the emergency room. The universe is conspiring against her and screwing her at every turn. When her boss offers her a job at his new lab on a luxurious island to continue her research, she jumps at the chance to sneak away from the troubles plaguing her and leave them behind.

When trouble follows her to the Island and threatens her new life, she’ll rely on the one person her brother trusts to keep her safe, even if the two clash in every way but sexual tension.

Reed (Book 4)
Reed Love is more than a computer genius and hacker extraordinaire thanks to his DNA. He has a love-hate relationship with the invisible pop-up boxes that appear around everyone he meets and the ease with which he can access that data. Pictures, financial data, passwords, it doesn’t matter what the information or how deep in the web strangers try to disguise it. Reed has access, and these boxes dance in front of him, enticing him to look.

Handler Avery Malone enjoys life and traveling to exotic locales to keep the operatives under her charge safe and out of trouble. She thrives on adventure and the pressure of being the one person who calls the shots.

When Reed Love, the brother of one of her operatives, shows up on her doorstep with messages about encrypted thumb drives and going underground, she knows she’s going to have her hands full getting to the truth.