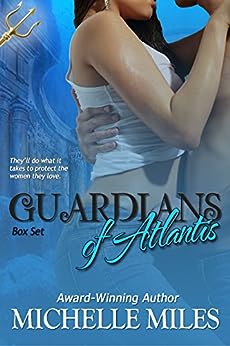 Book 1: Tempting Eden
Eden wants to forget her cheating boyfriend, empty bank account and dead-end job on the sandy beaches of the Bahamas. Sabre is on a mission to bring back human females from the surface but all that changes when he sees Eden. He intends to keep her for himself…no matter the price

Book 2: Seducing Eve
Kidnapped and brought to Atlantis, Eve is desperate to escape her lab prison. Lucian’s mission is to investigate the kidnapped woman. He never expects Eve to escape the lab, wreaking havoc. Rescuing her, they’re chased into the long-deserted tunnels, trying to outrun fate and stay alive.

Book 3: Ravishing Helene
Helene is nursing a broken heart and ignoring the rebellion her brother is leading. Only when she’s captured by the enemy does she realize the peril she’s in and her importance. Raven is the only man who can rescue her from the radical scientist—as well as mend her shattered heart. Will she become part of the rebellion or suffer at the hands of supreme evil?

Sabre knocked on Helene’s door and waited for her to grant him entrance. When she didn’t he pushed it open and peered into the small confines of her apartment. In the darkness he could see shapes of her furniture strategically placed in her home. She was meticulous in her décor and he knew there wouldn’t be as much as a speck of dust on anything. He could see sunlight slashing through the cobalt waters beyond the floor-to-ceiling windows and fish swimming by as though they had not a care in the world.

Stepping inside, he closed the door and listened in the silence for some hint of life.

No answer. He flipped on a light to chase away the shadows and scanned the room. Everything was in its place. The sofa sitting atop the handmade Atlantean rug, the modern art on the walls and the heavy wood coffee table and end tables. Yet there was no sign of his sister.

Her bedroom door opened but still she did not emerge. She knew he was there, opened the door to let him know where she was yet didn’t come out to greet him. Balling his fists, he charged toward her bedroom…and stopped short in the entrance.

His baby sister was curled on her side on the bed with her knees drawn up to her chest. Her eyes were closed and her dark hair was fanned out on the pillow behind her. A stabbing pain slashed through his heart.

“I don’t need you to check on me, Sabre.” Her voice was cold, unfeeling. Desolate.

He paused, not sure how to proceed. He knew she was hurting. He knew she was devastated. He also knew she would survive. She had to. She was all the family he had left. He couldn’t bear the thought of losing her too.

He didn’t want to ask about how she was feeling—he knew the answer. He also didn’t want to tell her he wanted to make sure she was all right—that would cause her more pain. She’d lost her child after all. She’d been angry and depressed since.

He’d talk to her about something else.

“I’ve been called to a special meeting with General Bastian,” he said.

“So?” She never opened her eyes. Never looked at him.

“It’s also a meeting with the president. Top secret.” That got her attention and she finally blinked open her eyes. He pressed on. “General Bastian thinks it’s about what’s happening.”

“What’s happening? You talk as though it’s nothing to be concerned about,” she snapped. “Do they even really care, Sabre?”

She sat up, her chocolate locks falling around her face. Her thin, gaunt face. He could see the shadows under her eyes and her sunken cheeks and it pained him. She was not the lively young woman of their youth he remembered. The one who looked up to him as her hero. The one who used to tease him about his fascination with humans. It was why he joined the Guardians and why he worked so hard to become General Bastian’s second-in-command.

Why he wanted to keep her safe and make sure nothing ever happened to her.

“Yes, they do. And they are concerned. That’s why they’re going to do something about it.”

“What can they do? We’re a dying race and everyone knows it.” She clutched the blanket tighter around her shoulders, shivered and laid back down. Her back was to him as though she’d shut him out already.

Sabre feared their world—the one they’d so carefully built over the last few centuries—was coming to an end. He’d known it was bad—he’d experienced it firsthand when his sister miscarried. Her husband, devastated by the loss, committed suicide. The losses had been so hard on her she’d fallen into a deep depression. One he couldn’t get her out of.

But their tragedy wasn’t unique. The women of Atlantis could seldom conceive and if they could, like his sister, they couldn’t carry the babies to term. Atlantean geneticists had determined their race had become too small for them to survive. Even his general wasn’t immune to the tragedy. His wife had lost their child.

The men and women of Atlantis would soon be extinct.

“What if they found a solution?” he asked. “What if they discovered a way to allow us to continue on? To make sure you could conceive?”

“What if who cares?” She flopped over, sat up and glared at him. “I’ve begged you for weeks now, Sabre, to get me out of here. I don’t want to stay here any longer. Can’t you understand? Take me to the surface. Leave me there. Why can’t you do that?”

He clenched his fists. They’d had this argument so much it was old news. Why couldn’t she understand her place was here? Going to the surface was strictly forbidden and she knew it.

“Yeah. Duty and honor and all that shark shit.” She rolled her eyes. “Leave me alone.”

Frustration clawed through him. It took all his self-control not to grab her and shake some sense into her. Going to the surface was never a good idea. Humans weren’t stupid. They would be able to see she was not one of their kind right away by the tiny gills behind her ears. And then they would run tests and ask her questions and demand to know where she came from. Which would lead them right to the lost city of Atlantis.

Several centuries ago a human scientist found the location of Atlantis. He had come to their world and learned everything he could about them before returning to the surface. The mistake had been allowing the human scientist to return. He’d spread the word about the fabled lost city. The next thing they knew the Atlanteans were invaded by humans determined to “out” them and make the location of the secret continent known. They’d raped their women and pillaged their city, stealing artifacts to take back. That left the Atlanteans no choice but to fight back and that was when the Guardians had been formed.

“I’ll go,” Sabre said at last. “But if there’s a way for our race to survive I will do whatever necessary to make sure that happens.”

She said nothing as he turned and left her. He closed the door behind him and headed to the conference room to meet General Bastian and the president of Atlantis.

Michelle Miles believes in fairy tales, true love and magic. She is the award-winning author of the epic fantasy, IN THE TOWER OF THE WIZARD KING, as well as the fantasy romance series, REALM OF HONOR, featuring knights and their ladies fair, and the paranormal romance series, GUARDIANS OF ATLANTIS. Her love of romance began with Victoria Holt, Elswyth Thane and Daphne du Maurier. Her love of fantasy began with the lyrical stories of Patricia A. Mckillip and Anne McCaffrey. As a member of Romance Writers of America, she has served on the board of several chapters as president and treasurer.

In her spare time, she enjoys listening to music, reading, cross-stitching and watching movies. A Native Texan, she loves castles, dragons, fairies and elves and is an avid Game of Thrones and Outlander fan. She can be found online at Facebook, Twitter, Instagram, Pinterest and Goodreads.