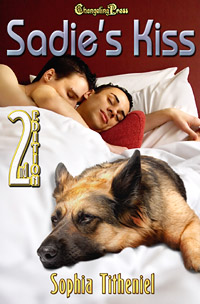 Evan and his friend and protector, Sadie, have a life together. Alone. Just the two of them. And that’s just the way they like it. Well, Evan, anyway. Sadie may be a dog, but she’s more trustworthy than any human Evan’s met since his accident.

Sadie thinks Evan needs a human companion. So when Casey, the social worker from the LGTB Support Center shows up to rescue Evan from himself, she puts her cunning plan into action. It starts with the little things. Like a kiss.

Casey was tall. That was the first word everyone would come up with if they had to describe him. He’d always had a head of advantage over everyone else around him, from middle school and right up to his college days as a basketball player.

The second word would be shy. Casey was well liked, but maybe because of his height and general body size, Casey went out of his way to make himself small and unnoticeable, invisible almost, and for a six foot five, strapping guy like him it wasn’t that easy. But he succeeded quite spectacularly.

And to be honest, in the hustle and bustle of San Francisco, if you didn’t want to be seen, people wouldn’t look twice. There was too much else to engage with to pay attention to a former college basketball player turned social services major, and Casey liked it exactly like that.

Casey looked out of the tiny window of the one room, open space office he shared with Sandra, a half Black, half Puerto Rican Tasmanian devil turned accountant, and edged against the wall to throw the window open. Spring was upon them, and San Francisco was a blur of colors so bright it made your eyes sting.

Casey smiled and looked back at his computer screen, adjusting his headset, and getting back to that damned report that had kept him up most of the weekend. Not that Casey had anything else to do that weekend, but that was beside the point.

The phone rang, and Casey pushed a button automatically as he typed away. “LGTB Support Center, I’m Casey. How may I help you?”

The line was delivered amongst crass laughter, and Casey punched the off button a little too viciously, sending the phone base skidding across his meager desk, pens and papers tumbling in a flurry to the floor.

“I think we just tossed a stupendous amount of money down the toilet with that stupid ad campaign,” he said to the room at large, which consisted of him and Sandra’s empty desk. There were two volunteers who usually manned the reception desk, but it was finals time for every other kid in San Francisco, and the LGTB Support Center was seriously understaffed.

Which was the nice way to say that after the last cut the state had done for humanitarian work, the center could barely keep afloat with Casey, Sandra and Leo, Casey’s out and proud bisexual roommate, who was widely recognized as the biggest manwhore of San Francisco. The way things were, it was a miracle they even managed to keep the books in what resembled order, and Casey suspected it had a lot to do with Sandra’s creative accounting.

Casey could almost hear his parents’ disapproving sighs, even if they were miles away, all the way in Sacramento. They never really minded that Casey was gay, as long as he kept up his appearances and continued his career as a college basketball star. But when Casey had called them to tell them he was switching majors, his mom had cried for a week, and his father had refused to pay his tuition.

That was when Casey left the dorms to move in with Leo. Leo was the single most obnoxious person in the world, and Casey threatened to kill him on a regular basis — with more conviction behind the threat once Casey picked up his first shift at the center. One year later, he graduated with honors with his thesis in Social Services and Support in the Gay Community.

His parents missed their flight and never made it to San Francisco for his graduation. It really didn’t take Casey’s special sensitivity to read between the lines. They still called, though, mostly to remind him what a disappointment he was, but Casey had no regrets. He knew when he switched majors that he was never going to be the one whose name was written up in lights. He wasn’t tall enough, for one, despite “normal” people always having to look up when they spoke to him. And he simply wasn’t good enough. He was tired of warming a bench while his life swept by him. Once he managed to pull free from his parents’ overblown expectations, Casey had found that he liked working with other underdogs like him. The LGTB center was tiny, cramped and cluttered, but it felt more like home to him than the changing rooms had ever done.

Casey had a love/hate relationship with his job (bordering on hate during the unexpected weekends he’d get called in, or the Monday mornings when the stapler didn’t work or the printer got stuck), but Casey wouldn’t trade it for the world.

The Center was the first place where he felt like he belonged. Where no one treated him like a circus show. Where his “intuition,” as he dubbed it, earned him smiles and hugs and freshly baked cookies rather than scorn, bullying. Or a chorus of “freak.”

The phone rang again, and this time Casey closed his eyes, hands splayed wide on the desk. He let himself feel. It was hot outside. Too hot. A girl, crying. Blood.

Casey picked up the phone. “LGTB Support Center, I’m Casey, how may I help you?”

Heavy breathing at the other end. Casey cringed. He closed his eyes again, trying to reach out, letting his sense flood him, nearly making him dizzy.

“It’s okay,” he said, his voice different this time, slow and secure. “Nothing will harm you now.” He saw the back of an alley, a wrought iron lamp post sticking out under an open window. Casey knew the place, it was near the Fountainhead pub, down on the west end. “Hang in there, sweetie, I’m sending someone over to get you, okay?”

“Sophia Titheniel writes about love, survival, and learning to trust others in Sadie’s Kiss. As always, this author knows how to create a gay relationship that touches you deep.”

“Sadie’s Kiss is a superb short story with a positive message of survival.The amazing Sophia Titheniel has created an outstanding well written story with realistic and very appealing characters.”