Bad boys always do it better, and Ty is about to show Josie just how good sinning can be. 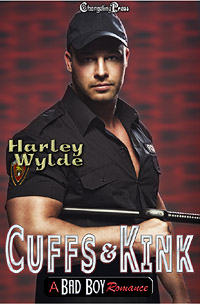 Holy fuck! It had obviously been too long since I’d gotten laid if little Josie Wright had my dick standing at attention. She couldn’t be more than twenty, and her prim and proper attire always made her look even younger. At least, that was normally the case, but it seemed the reverend’s daughter was taking a walk on the wild side in her short shorts and barely-there halter top. How the hell had she escaped her parents’ house looking like that?

She normally looked more like a boy than a woman, but fuck if those shorts didn’t hug slender curves. The shirt was molded to her, showing off breasts that looked perky even if they were on the small side. I’d always been into stacked women, but for some reason those understated curves of hers were making me harder than hell.

I needed to avert my eyes and get my monster cock under control. Walking around town with my dick tenting my uniform trousers was probably not a good idea. I was pretty sure if anyone knew it was Josie who’d given me wood, I’d be run out of town by the end of the day. Hell, I had to be a dozen years her senior, but fuck if my dick cared right now. Had she really been hiding that body all this time? I glanced her way again and saw her talking to some of the boys from the local college. She was better off with someone closer to her age, even if I did want to bend her over the hood of that little VW Beetle she tooled around in every day. That ivory skin of hers would look hot against the cherry red paint.

She laughed at something they said and the sound carried on the breeze. It reminded me of damn fairies, it was so light. My cock jerked against my zipper, and I discreetly adjusted myself. If I didn’t get the hell back into my cruiser and away from Josie, I was going to end up embarrassing myself. Hell, I was already embarrassed that a slip of a woman had me harder than I’d ever been before. And knowing that prim and proper Josie was more than likely a virgin just made matters worse. I’d always steered clear of innocent women, but I would have loved to corrupt her. An image of her bound to my bed flashed in my mind, and I groaned as I reached for my cock again.

I was just about to slide into my vehicle when the tone of her voice changed. Her harsh, urgent tones had me turning her way again. One of the guys had her hands shackled behind her in his massive grip while the other leaned into her space. When I saw him fondle her breasts and her struggle to break free, I found myself slamming the car door and charging down the street. His lips were on her neck as his hands pawed at her, and without thought I reached out and grabbed him by the back of his neck, slamming him facedown onto the back of her Beetle.

“I believe Miss Wright said no.”

“What the fuck, man?” the dickhead whined. “We were just having some fun.”

“I suggest you have fun somewhere else, because if I catch you having that kind of fun in my town again I’m hauling your asses to jail for attempted rape. I have no doubt that’s where you intended to take things. Maybe not here in the middle of the street, but once you’d managed to get her alone. Isn’t that right?”

The second guy held his hands in the air and backed away. “It was just a bit of fun, officer. She’s not worth the trouble.”

The one in my grasp struggled to break free, but I slammed him against the car again. His face was turning almost the same color as her paint job, and I smiled grimly. Josie looked at me with wide eyes as she massaged her wrists. I saw the angry red marks where they’d held her too tight, and it made me want to lash out at the asshole in my grip.

“What do you say, Miss Wright? Are you pressing charges? I doubt I could nail them for attempted rape, but definitely for assault.”

She shook her head, and I noticed her eyes were shiny with unshed tears. Fuck me. My heart twisted in my chest at that innocent face looking so crushed. If she’d known what would happen, I’m betting she wouldn’t have worn those clothes outside of her house today. Hell, I was the law and even I was hard as a fence post just looking at her. Men should be able to control themselves better, and most of us could. A woman had every right to wear whatever she wanted. But there was always a dickhead in the bunch. Or in this case, two.

“Looks like you’re free to go, asshole, but steer clear of Josie. You hear me?”

I released him, and he took off down the street without even a backward glance. I wouldn’t be surprised if he’d pissed himself at some point. Once I was certain he was gone and wouldn’t cause more problems, I turned to face Josie. Before I could even open my mouth to ask if she was okay, she launched herself into my arms, plastering that sweet body against me. Yeah, if I’d been hard before, I was a fucking steel post now. There was no way she didn’t feel the effects of her body against mine. Surely, even Josie Wright wasn’t that innocent.

“Thank you, Officer Daniels. I thought they were harmless, but…”

My shirt felt suspiciously damp, and I looked down to see tears streaking her cheeks. My arms tightened around her as I did my best to comfort her, without copping a feel. I might be an ass, but I wasn’t that much of an ass. Although, her ass… No, I wasn’t going to think about her ass, even if it did look good enough to bite.

“Let’s get you home,” I said, setting her away from me — or trying to. The damn woman was attached like a barnacle. Her arms tightened around my waist, and I expected her to wrap her legs around me too.

Mmmm. Oh yeah, arms around my neck, legs around my waist. Now that was an image I could jerk off to later. Sweet little Josie, open and willing and oh so wet. I’d bet she tasted divine and felt even better. Not that I would ever find out. Nope. I was going to put her in my car and take her home where her mama could take care of her.

You can purchase Cuffs & Kink at:

You can find more Harley Wylde books at harleywylde.com!