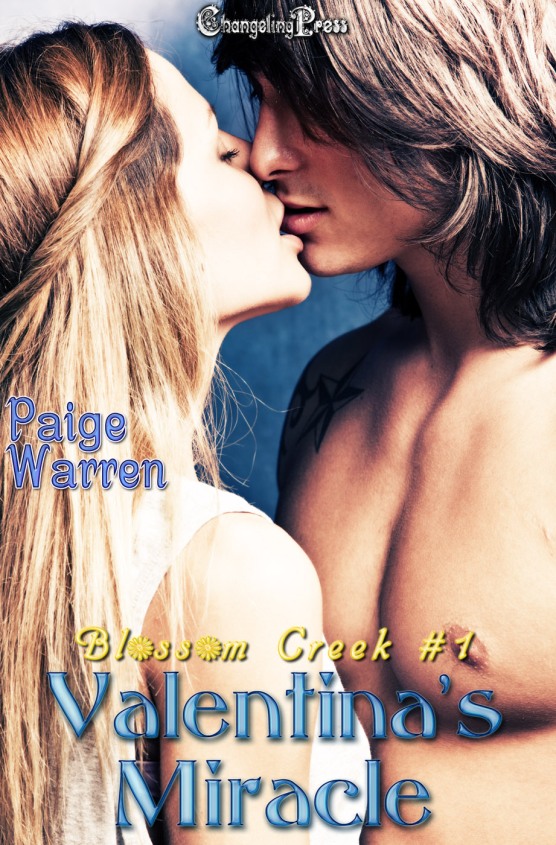 Valentina needs a miracle. Instead she finds a sexy bad boy with a heart of gold.

Valentina Cupid has always despised her name and the stupid holiday that goes with it. Starting over in the small town of Blossom Creek, she’s hoping for a miracle. Down to her last few dollars, she has no choice but to sleep in the car with her two kids, hoping to blend in with the other cars parked at Gleason Auto. But one sexy mechanic definitely notices.

Jesse Jameson is no one’s idea of a knight in shining armor. With a checkered past and a trail of broken hearts, he’s not anyone’s ideal. Still, when he sees the single mom sleeping in her car, he knows he can’t just walk away. But Jesse underestimates the temptation that is Valentina Cupid, and one kiss ignites a passion that won’t be denied. He’s going to prove to Valentina he’s not like her loser exes, and he’s going to give her a Valentine’s Day to remember.

*please note this is an unedited excerpt*

Valentina Cupid tried to ease the tension in her neck. Her children, Max and Katy, were asleep in the backseat. It had only been a few days since Gage had walked out of their lives, or more like run. Valentina had come home to find his things packed and gone, and an eviction notice tacked to the door. She’d quietly packed their belongings, put the kids in the car, and just drove until her vision blurred. After traveling for three days, she was down to their last hundred dollars and knew they couldn’t run any further. Blossom Creek, Texas would have to do until she could find a job and earn some more money.

Her hand smoothed over her still flat stomach. At least she wasn’t showing yet. A new start in a new town was just what her little family needed, but she knew once people learned her kids all had different fathers, they’d sneer at her just like the last town had done. She had a thing for bad boys who knocked her up and took off, and never seemed to learn her lesson. If she ever dated again, she’d have to pick a nice, nerdy guy who sat at a desk every day. Tattoos and muscles were overrated.

The box of peanut butter crackers lay empty on the passenger seat. She’d bought it yesterday in hopes of spreading their cash a little further, but her kids really needed a hot meal. A diner on the right caught her attention and she pulled into a space out front. Scrubbing her hands up and down her face a few times, she unbuckled her seatbelt and got the kids out of their car seats. They’d been travelling for three days, only stopping at truck stops and rest areas long enough for Valentina to close her eyes for an hour here and there.

She gripped their hands as they entered the diner and waited to be seated. It seemed almost as if every eye in the place turned their way. Valentina’s cheeks flushed and she tried to avoid their gazes. An older woman wearing an apron came over, flashing them a smile.

“You want a table or a booth?” the waitress asked.

Max tugged on her hand. “Can we have a booth, Momma?”

The waitress nodded. “I know just the spot.”

She grabbed a menu and three rolls of silverware before leading the way to a booth in the window. Max and Katy both needed booster seats, but once they were settled, Valentina slid into the other side. She was so damn tired the words on the menu ran together and turned in black fuzzy blotches, but she fought to focus and remain upright. Her kids needed her.

She read off the menu choices they could afford and let Max pick his meal. Katy hardly ever ate anything but mashed potatoes and mac ’n cheese. As much as Valentina wanted to order the biggest burger with the largest order of fries on the menu, she settled for a cup of soup and some crackers. After she placed their order, the waitress returned with some paper and crayons for the kids.

“Thought they might want something to do while you wait for your food,” the woman said. “I’m Barb. Just holler if you need anything.”

“Thank you,” Valentina said with a tired smile.

When their food was delivered, Barb set down a large salad with chunks of grilled chicken and a side of ranch. Valentina opened her mouth to protest that she hadn’t ordered it when the woman held up a hand.

“You need more than soup,” Barb said. “Won’t do your kids any good if you pass out from hunger.”

“You sticking around town or passing through?” Barb asked.

“I thought we’d stay for a while.”

“Diner’s closing in an hour. Why don’t you wait until the customers are gone, and if you’d like, you can help me close up. I’ll pay you cash.”

Valentine’s face burned with embarrassment as she nodded in agreement. Was it noticeable that they were on their last leg? She hated accepting charity, but if Barb would let her work for the salad and a few extra dollars to get them by a little longer, she couldn’t say no. They ate their food and the kids colored a little more while they waited for the diner to empty. When the last customer had walked out, Barb locked the door and flipped the sign to Closed.

“You ever worked in a diner before?” Barb asked.

Barb snorted. “None of that ma’am nonsense. Just call me Barb. I’m going to let you refill the napkins and condiments at each table. Then you can sweep and mop the floor. I’ll be in the kitchen helping Hank prep for tomorrow. Come on. I’ll show you where everything is.”

It took almost two hours for Valentina to get everything done, and her kids had fallen asleep at the table when she was finished. Barb insisted on paying her twenty dollars in addition to the salad she’d already provided, and wouldn’t take no for an answer. Valentina pocketed the money and carried her kids to the car one at a time, fastening them back into their car seats. She had no idea where they’d go for the night, but fatigue pulled at her.

Valentine drove until she found a darkened parking lot by a large building marked Gleason Auto. It seemed to be closed for the night, and she hoped to blend in with the other cars in the lot waiting for repairs. She turned off her headlights and shut off the engine. She’d have to wake in an hour and run it again to warm the car back up, but she didn’t have enough gas to leave it running all night.

She reclined her seat a little and closed her eyes, after making sure the doors were all locked and the windows all the way up. Her body felt like lead weights were pulling her down and her eyes burned from exhaustion. She knew pushing herself so hard wasn’t good for the baby, but she had little choice right now. Barb hadn’t mentioned a permanent position tonight, which meant Valentina would have to spend some of her money on a local paper and see if any jobs were posted. It was that or walk up and down the main strip checking with every store along the way. Not that she had any idea what she’d do with her kids while she worked. She couldn’t afford daycare without a job, but she couldn’t work without someone to watch the kids.

Valentina let sleep pull her down, sleeping harder than she had in days.  A slight chill in the air woke her a while later. Looking into the backseat, her heart lurched when she saw how flushed Katy looked. Her daughter had kicked off her blanket at some point and shivered in her car seat. Max still dozed, but looked fine. Valentina got out of the car and opened the back door. Katy was burning with fever, but Max felt cool to the touch. Her heart ached as she realized that her heavy sleeping had likely gotten her child sick, since hadn’t been awake to turn the heat back on, all because she couldn’t afford a motel room.

Booted steps came toward her and she spun to face the person, her hand at her throat as her heart raced. A man, who didn’t look much older than her twenty-two years, had a scowl on his face as he approached. Despite the cold February air, his short sleeve shirt displayed the tattoos on his arms. The man drew nearer and brushed his long hair out of his face.

“This is private property,” he said, his deep voice sending shivers down her spine.

Not another bad boy, Valentina. Get a grip.

“I’m sorry. I didn’t realize we were trespassing.”

“We?” he asked as he came to a stop in front of her. The man peered around her shoulder and his eyes widened a little when he saw her kids in the backseat. “Holy shit. Did you sleep in your car last night?”

“Bring the kids inside and warm them up,” he said, turning to head toward Gleason Auto. “I have some hot chocolate they can drink.”

She bit her lip. “Is there a free clinic in town?”

He paused and turned to face her again. “A free clinic?”

“My daughter. I think she’s sick.”

The man came closer again, peering into the backseat. “Blossom Creek doesn’t have a free clinic. Do you not have insurance?”

“Old Doc Johnson owes me a favor. Bring your kids inside and I’ll have him stop by on his way to his office this morning. The three of you can get warm while you wait.”

“I don’t even know you. Why are you helping us?” Valentina asked.

“Let’s just say I have a soft spot for kids. Why isn’t your husband here helping you?”

“I’m not married,” she said softly.

“Max’s dad left two years ago. Katy’s dad took off right after I told him I was pregnant.”

Valentina placed a hand on her stomach. “Three.”

He studied her a moment and seemed to come to some sort of decision. “You need help getting the kids inside?”

“You’re still going to help us?”

“Figure someone should. Sounds like you’re the type to attract assholes.”