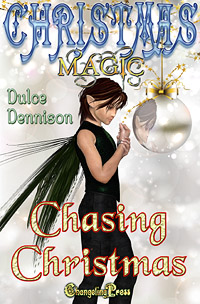 College senior and ocelot shifter Beck Prescott is home for the holidays, but there’s only one present he wants to find under his tree — his sexy neighbor, Chris Wilcox. Even though the wolf shifter is older than Beck, Beck knows they’re destined to be together.

Getting Chris to agree is another matter, but Christmas is the time for miracles, and Beck thinks this is the year he may get his fondest wish. A mate.

Pre-Order for December 8th at Amazon, B&N, iTunes, and Kobo

Beck Prescott couldn’t decide if he was elated to be home because it meant spying on his super sexy neighbor, or being filled with dread because he knew his parents would ask, once more, if he’d found his mate. Truth be told, he’d known since he was sixteen who his mate was, but he had fuck all chance of landing the sexy beast. Their neighbor, Chris Wilcox, hardly knew he existed. They’d barely spoken aside from a random hello here and there over the years. And was it any wonder? Chris had to be close to his parents’ age. Not that he looked a day over thirty, despite the silver at his temples.

He peered through his bedroom window and into the house next door. It just happened to be that Chris’s bedroom was directly across from Beck’s, which had been both a pleasure and a torture for the last five years. The object of his obsession was doing pull-ups in the bedroom doorway, his abs rippling with the movement. Beck licked his lips and pressed his hand against the growing erection in his jeans. It wasn’t the first time he’d wondered what it would feel like to be held by such strong arms. The few guys he’d been with couldn’t compare.

Chris did several more pull-ups before dropping to the ground and grabbing a nearby towel to wipe the sweat from his face and body. Beck wondered where Paul was — Chris’s significant other. Even though he knew Paul sometimes went out of town for business, it seemed odd he’d be gone during the holidays.

“Beck!” his mother yelled up the stairs. “I know you’re here. Your car is in the driveway.”

He sighed and pushed away from the window, making his way downstairs. His mother stood at the bottom, her arms folded and her foot tapping. The look of displeasure on her face was completely his doing, mostly because he’d been avoiding her.

“Were you going to hide up there until you starved?” she asked.

“I was going to come tell you hello,” Beck said. “I needed to put my things away.” And do a little drooling over Mr. Sexy.

“Your father and I have to go out tonight. A dinner with his law firm,” his mom said. “I’ve made some spaghetti and it’s in the fridge. All you have to do is warm it up. There’s a loaf of Italian bread in the pantry, if you’d like some to go with it.”

“You didn’t have to cook for me if you had plans,” Beck said. “I’m capable of taking care of myself.”

She patted his cheek. “You’ll always be my baby boy. I’m going to be busy the next few days planning the Christmas Eve party, so I won’t get to spend much time with you until Christmas Day.”

“It’s fine, Mom. I know how to entertain myself.” Mostly by looking out his bedroom window. “Besides, we’ll have almost a full week after the party before I have to return to campus.”

“I’ve delivered all of the invitations except one,” his mom said. “Will you take this one over to Mr. Wilcox? I’ve been in such a rush I overlooked it.”

She handed him a red envelope with silver writing across the front. Beck took the invitation and smoothed a hand down his wrinkled shirt. He grabbed his leather coat off the hook by the door and pulled it on before stepping out into the snow. Little did his mother realize she’d just given him the best present ever: a reason to talk to their neighbor.

Beck trudged through the ankle-deep snow and walked up the icy steps of Chris Wilcox’s home. He rang the bell and waited, stomping his feet to keep the blood flowing. Shifter or not, it was damn cold outside.

The door swung open and a shirtless Chris stood in the doorway. “Beck. I didn’t realize you were back home.”

“Christmas break, but it’s my senior year, so it won’t be long before I’m back for good. Or at least until I get my own place.”

“Only for another month.” Beck held out the envelope. “Mom wanted me to bring this by. It’s your invitation to the Christmas Eve party she throws every year.”

Chris reached out to take it, his fingers brushing against Beck’s. It was enough to make the young shifter shiver, and not from the cold. Chris’s gaze raked over him as he opened the envelope. He scanned the contents of the invitation and frowned a little.

“I’m afraid Paul will not be attending with me,” Chris said.

“Is Mr. Murphy out of town?” Beck asked.

“Yes. Indefinitely.” Chris’s gaze locked on his. “Paul and I are no longer together.”

Beck’s heart leapt at the words, but he tried to hide his excitement. “I’m sorry. I know the two of you were together a long time.”

Chris shrugged. “He found his mate.”

“Maybe you’ll find yours,” Beck said, his voice low as he held the older shifter’s gaze. Beck thought it might be his imagination, but the shifter’s eyes seem to warm as he stared back. He wondered what it would take to not only gain the attention of someone like Chris, but to hold it.