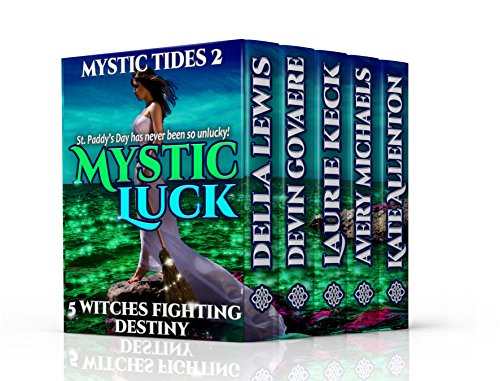 $0.99 or read for free with Kindle Unlimited

Five witches set out to change their destiny.

Bannon Murphy, proprietress of Beachmoore Inn, has her hands full with a convention of Seelie tourists in town for Blansett’s St. Patrick’s Day festivities. Not only does she have to keep the pixies and sprites separated, she has to keep a high prince of the Seelie court happy and the banshee guests from scaring the terrene vacationers half to death with their wailing.

Into the midst of all this madness walks gorgeous Deaglan O’Brian, a Tuatha Dé Danann with powers of his own. Despite her dedication to work, and her love of running the inn, Bannon can’t help but get distracted by Deaglan’s good looks and flirtations.

When a rival faction tries to destroy the week-long celebrations, Bannon finds herself teaming up with Deaglan to save Blansett from a wicked witch and her evil husband, but along the way, she finds love in the midst of magic and mayhem.

Tabby Whitlock’s happy life crashes around her when a little green queen appears in her brother’s closet. Rionach claims Tabby is the new princess and decrees that, on St. Patrick’s Day, Tabby must choose between service and love. The choice of love seems easy enough now that Tabby has met Max Gallagher.

Max is a shy earth witch who grew up surrounded by love and laughter. His greatest wish is to find a woman to share his life. When he meets Tabby, he knows she’s the woman who will fill the void in his life. When Tabby begins to change, Max knows something else: he’ll stick by her no matter what.

Tabby will need the luck of the Irish and all the love and support she and Max can muster—because the choice between service and love isn’t always as easy as you’d think.

Jenn Skyler is a constant if nothing else, an air witch who values her independence. She is a thoughtful analyst of life and sees things as straightforward while intellectually weighing all that comes before her.

Nevlin Rowe enjoys life and all its forms. He loves everyone, and no one. As a Druid scholar, he’s had lifetimes of lessons and experiences and devoted many, many years to caring for, protecting, and being part of the Earth.

When Nevlin comes to the town of Blansett, he does so with a prophecy, as well as a curse. When the sea turns green, that is not all that changes. Jenn is suspicious of him and his intentions, and seeking answers, she discovers not only has Nevlin enjoyed lifetimes of journeys, he has spent centuries seeking answers of his own. Now there are signs all around if only they can interpret them.

As Air meets Earth, a whirlwind of emotion erupts and Nevlin becomes determined to bring Jenn down to Earth. Will their connection be limitless like the Sky itself or grounded like the Earth? Or do all signs point another way?

Paige Jessop is a destroyer in the outside world, but in the realm of supernaturals, she is considered “gifted.” She lives a life of chaos and isolation until her godmother, Helena-Marie, magically summons her to Blansett, North Carolina. There Paige finds out about her extraordinary powers and her family’s cursed past.

Dr. Zack Lewis is tasked with helping Paige hone her gifts. It’s an unnerving reality since she is literally the woman of his nightmares, but he can’t deny the unexplainable need to be near her.

Both Paige and Zack are healers. One by profession, one by nature. As both of their families’ secrets and curses threaten to destroy them, they must decide whether true love really can conquer all.

Lucy Blansett has two options; solve an ancient prophecy before midnight on her birthday or watch the magic in her hometown be destroyed. Meeting a man who’s convinced she’s his future wife isn’t in her plans, but she’s quickly finding out that sometimes plans need to change. Together they’ll have to fight the elements and their attraction to stay focused on solving the mystery.