As the holidays approach, I know stress levels run high and people are frantically finishing their holiday shopping, wrapping, and preparing for family get-togethers. What better way to treat yourself than to take a break and read a book?

For a limited time, Brielle and the Alien Geek is marked down to $0.99. That’s 80% off the regular cost! It’s book one in the Intergalactic Brides series, and can be read as a stand alone. I hope you’ll give it a go. 🙂 When you’ve finished reading, I’d love to hear what you thought about it, either in a review or an email (jessicacoultersmith@yahoo.com)! 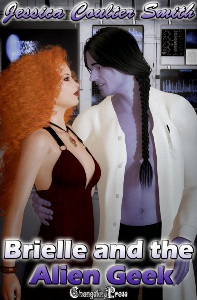 Brielle has waited faithfully for her fiancé to return from Terran Prime, only to discover she’s been engaged to a lying, cheating bastard who tosses her out on her rear the moment he’s back on Earth.

Not one to go down without a fight, Brielle will do anything to ensure her survival — even sign up for a bride exchange on another world.

Syl has lived his life in his lab, always preoccupied with his experiments. But the moment he sees Brielle, he realizes that perhaps his life has been missing something after all.

Wanting and having are two different things. What would an exotic looking female like Brielle want with an alien geek like him?

Syl was more than a little aware of the woman who had moved in downstairs. He’d watched from his wall of windows as she entered the building, a trail of Terrans following in her wake, all anxious to get a look at their potential mate. If he hadn’t been so busy, he might have joined their ranks. It wasn’t that there weren’t females on Terran; there just weren’t any available females on Terran. Big difference.

He looked around his pristine lab and wondered when his work had become his life. For two years now, they had accepted mates from other worlds, predominantly Earth, but not once had he ever contemplated claiming a mate for himself. His work kept him busy and had, up to this point, kept him happy. But now he wondered if maybe there was something missing in his life.

It wasn’t uncommon for him to take a trip off world every six months to visit the floating brothel nearby. He knew the women were clean, had insisted on them being tested regularly the first time he’d visited, threatened to bring it before the intergalactic council as a health hazard, but there was something lacking from the encounters. Yes, he was able to relieve some stress, but it was so… clinical. There was no passion involved; the women merely did their jobs, jobs they hadn’t asked for to begin with. His conscience always pricked, knowing he was sleeping with a woman who had been forced into that lifestyle.

What would it be like to sleep with a woman because she wanted him? What would it be like to be wanted? No one wanted him, never had. Even his own mother hadn’t known what to do with him when he was a child, always more interested in what went on in the labs than in the training fields. He came from a long line of proud warriors, and while Syl knew how to use a sword and various other weapons, it wasn’t the life choice for him. He preferred beakers of solutions, test tubes filled with green goo, or assisting the weapons designer with new projects. He worked on everything from inoculations to laser weapons. There was never a dull moment.

And yet it wasn’t fulfilling enough. Not anymore. He wanted something else in life, something he’d never thought to dream of before. Syl wanted a family, a mate to call his own and children who would either take after their beautiful mother or their brilliant father. He’d watched from his windows as families had gone on outings to the local park areas or the swimming pool, watched his friends pair off one at a time. When would it be his turn?

The new Earth woman was beautiful, from what he remembered. There had been a brief video that had played for all of Terran, a shot of her punching her ex-fiancé after she had discovered he’d cheated on her. In Syl’s opinion, she should have done much worse to the male. He obviously hadn’t been worthy of her, and to his way of thinking, she was much better off without him. He didn’t understand what had prompted her to become a bride and move to Terran, and he wouldn’t question her if they met face-to face. If she wanted to share the story, she would in her own good time, he was certain.

“What do I know of females?” he muttered as he mixed two solutions. “My own mother didn’t want me. Why would a mate?”

CHECK OUT THE REST OF THE SERIES…

Book 1: Brielle and the Alien Geek

Book 2: Victoria and the Alien Doctor

Book 3: Avelyn and the Alien Daddy

Book 4: Charlotte and the Alien Ambassador

Book 5: Hazel and the Alien Biker

Book 7: Caitlyn and the Alien Protector

Book 8, Celeste and the Alien Bartender, will release in February 2017!