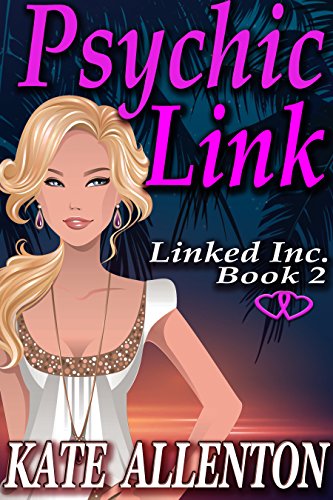 She’s a psychic. He’s a skeptic. Can they overcome their differences to find what matters most?

Psychic Cara Thornton’s biological clock may be ticking, but not fast enough to look twice at Cooper Cruz when he darkens her doorstep. Any man who shares DNA with her lying, cheating ex is automatically banned from her potential baby daddy sperm donor list. No way is she getting tangled in his mess, no matter how pretty his future offspring might be.

In need of help, FBI Agent Cooper Cruz will do anything to find his sister. Even if that means swallowing his pride to ask for help from the one woman his brother cheated on. If her ability is true, she’s the best chance he’s got to lead him to his sister’s location. Getting Cara to help should have been a piece of cake. He should have realized nothing about this woman would be easy.

Cara crossed her legs and let her gaze sweep over the man standing in her doorway. He looked in need of a good tumble in the dryer and a few eye drops to clear the redness from his eyes. Stubble covered the sexiest jaw she’d ever seen. Broad shoulders and muscular thighs gave him that bad-boy vibe that screamed ride me all night long. Damn, now that song would play in her head the rest of the day.

His Caribbean blue eyes were mesmerizing. His brown hair matched the icing on the brownie sitting on her desk. He’d make pretty babies. All she’d need was his sperm. Would he be offended if she handed him a cup and lifted her shirt to help him along?

“Are you Cara Thatcher?” His voice was deceptively calm, his gaze assessing. Muscles coiled in his arms, his jaw clenched, and Cara had this gut-wrenching feeling that if she answered his simple question, her life would be forever changed.

“Who’s asking?” she deflected and rose from her chair, ready to fire whatever security guard he’d slipped past downstairs. People called the workers at Linked Inc. quacks for having abilities. They weren’t the crazy ones. Crazy people were unpredictable, and…this guy, although good looking, might very well be tiptoeing the line.

His jaw ticked as he slipped his hand into his pocket. Cara kept her finger hovering over the alarm button beneath her desk. The scent of baby powder drifted to her nose, making her pause. The sweet, innocent scent was so at odds with his appearance.

The stranger’s blue eyes darkened while zeroing in on her fingers, and he slowly pulled his wallet free with two fingers as if he were a criminal trying to calm a trigger-happy police officer. “Relax, lady.”

Relax wasn’t in Cara’s vocabulary, even if he looked like a sleep-deprived, crazed daddy in need of a night off.

He opened his wallet and held out his badge. FBI? She plopped back down in her chair. The tension in her shoulders deflated, like the air in her tires the last time they’d been slashed. That crazy person had never been caught. Cara’s cheeks heated under his stare. Overreact much? Gah…“How can I help you, Agent…”

“Special Agent Cooper Cruz.” He gestured to the seat, asking permission to sit.

Cruz? The only Cruz she knew was Eric. The one that she’d dated. The same one who had destroyed her heart by stomping it into a million little pieces. That Cruz was the reason she no longer dated cops. And, although that Cruz and this one didn’t look remotely related, she couldn’t help the gut punch from having to relive the brief memories. Cara shoved the distant memories away and focused on the man she’d be addressing by his first name, in an effort to disassociate the two. It was the least she could do.

“Yes, of course. Please have a seat, Agent. Is it okay if I call you Cooper?”

Cara opened her desk drawer, pulled out her phone, and turned on the recorder. It was standard practice that she recorded everything so the authorities and her clients could review the message from a spirit or her visions later when they weren’t so emotional. It didn’t hurt that it protected her ass from lawsuits. “You don’t mind if I record, do you? I like to make sure you guys don’t misinterpret whatever it is I say.”

Silently she ran through her work calendar in her mind. She hadn’t had an appointment scheduled with Agent Cruz. She would have remembered. She would have canceled or pushed him off on one of her other sisters, just because of his last name. She smiled smoothly, betraying nothing of her annoyance. Her mother would be proud.

“Thanks, and sure, you can call me Coop.” He sat across from her, and his gaze traveled over the contents of her office. His expression darkened with an unreadable emotion as he crossed and uncrossed his arms. He looked one step away from bolting out the door, until his gaze landed on the “unofficial” certificate the FBI had given her for helping to pinpoint clues that led to the apprehension of a serial killer. He lifted a brow. “So it’s true? You helped catch the notorious Tri-County Reaper.”

The Tri-County Reaper was a serial killer of the worst kind. He was smart. He’d been terrorizing Florida, Alabama, and Georgia cops for ten years, disposing of his victims’ bodies inside the fresh graves of people just laid to rest. It was the last place any cop would look, and the only place where he’d left the evidence behind that had sent him away for life.

“I don’t catch criminals, Agent….Coop. I merely provide new clues for the police to investigate.”

He nodded and ran his hand through his already disheveled hair. “You come highly recommended.”

Doubt that. Feed me another line. Her brow rose instantly. Her help was usually swept under the rug. Her involvement was usually the last resort, after all the leads had turned cold. Who did this guy think he was kidding?

“I only deal with missing persons or homicides. Which one are you here for?”

Coop’s brows dipped. The energy around his aura sparked out like a live wire. His emotions seemed to be bouncing off the walls, even though he remained tight-lipped.

I can’t read your mind, buddy. The words were on the tip of her tongue. She could have eased him into a false sense of security, but why bother? He might as well get a first-hand look at crazy if he was asking for a one-way ticket on her crazy train.

His answered piqued her interest. She hadn’t had a good case in a month.

“Although I’m really here about your other ‘ability,’” he said making air quotations with his fingers, as if her ability was as imaginary as unicorns, the tooth fairy, and the unopened bottle of scotch in her desk drawer. She’d been tempted to offer him a shot to loosen his lips. At the rate he was talking, he’d eventually get to his problem by the end of next week.

“My other ability?” she asked, and her interest went from piqued to guarded quicker than a kid being released the last day of school before summer break. She had other abilities, but only a few select friends and family members knew what they entailed. This guy didn’t qualify as either. Someone was getting a voodoo doll commissioned in their honor. Cara clicked off the recorder.

“Yeah, you know. The one where you touch people or things and get flashes of their life.”

She knew, but how did he? Her affable smile from minutes ago slipped as she pegged him with her gaze. “Who did you say recommended me?”

“Eric Cruz, my brother. Well, technically, he’s my half-brother. His mom, my dad…”

“Um….” Cara pressed her lips together, biting back the words she wanted to say. Fuck you, get out of my office, and tell that sorry sack of shit, asshole-from-hell brother of yours to take a flying leap…were just a few. Her clasped fingers turned white as she tried to contain the anger bubbling inside that was on the verge of breaking free. Most days she was a professional, but that name had her sprouting imaginary horns. She should send him packing. Would a kick in the ass, to pass along to his brother, be unladylike? “I’m sorry. I can’t help you.”

“He said you’d say that. He actually said you’d say a lot worse, and told me not to bother, but I’m desperate. We’re desperate.” His wild blue eyes searched hers. “Please, don’t turn me away because of what Eric did.”

Cara held up her hand and rose from the chair. Any more mention of that name and he was getting a first-rate show. Stuff would be thrown; hexes would be made, and she would personally toss his ass out of her office…from the window. Screw trying to maintain an adult demeanor. Her shrink would charge overtime, and she’d need bail money, but it would be worth it.

Psychic medium Quinn Thatcher would never be classified as normal. Just ask her mother. Her people-pleasing skills could use some work, which is why Quinn prefers working with the dead over the living. Ghosts take her as she is, but when people experience Quinn’s sharp tongue and sassy attitude, there is no in between. They either love her or want to throw her off the nearest bridge, with the latter being more typical. Good thing she knows how to swim.

When a Scottish ghost invades her home and insists she resolve his earthly issues, banishing his ghostly presence becomes priority number one, and a battle of wills and wits ensues until she ultimately agrees.

Her task is easy enough. Return a gem to its rightful owner and then return home, minus the aggravating ghost. Quinn should know things are never as easy as they seem.

Scottish laird Collin Menzie has lived through his share of problems and is still currently dealing with the aftermath of a fire that nearly destroyed his ancestral home. When a beautiful American shows up to return his emerald, her presence starts an unavoidable collision course, in which he questions not only his destiny but also hers.

When dealing with an annoying ghost, an emerald worth a small fortune, and a sexy-as-hell Highlander, what could possibly go wrong? Quinn is about to find out just how deadly the combination can be.

Kate has lived in Florida for most of her entire life. She enjoys a quiet life with her husband, Michael and two kids.

Kate has pulled all-nighters finishing her favorite books and also writing them. She says she’ll sleep when she’s dead or when her muse stops singing off key.

She loves creating worlds full of suspense, secrets, hunky men, kick ass heroines, steamy sex and oh yeah the love of a lifetime. Not to mention an occasional ghost and other supernatural talents thrown into the mix.

Find out more about me and signup for my newsletter at www.kateallenton.com