Three years ago, Cohen Brandwein was a teenage media-darling, a popular author and internet celebrity. But ever since he came out as trans, public opinion has been less than golden, and these days he wants nothing more than to escape the big city and find somewhere quiet to work on his next book.

When he inherits an old house in the Irish countryside, Cohen sees it as a perfect opportunity to get away from it all. What he doesn’t count on is becoming embroiled in a paranormal murder mystery, and falling for the primary suspect, a handsome but mysterious self-proclaimed witch, whose reality makes Cohen’s fantasy books seem like child’s play…

Jacky had crawled into Niall’s bed in the night. Niall thought about waking him and telling him to go back to the thin foam mattress on the floor, in case one of his parents walked by and saw them together through the crack of the door. But the floor was wood, and the house was old, and winter was setting in. Sleeping on the floor was cold, but Niall knew that wasn’t why Jacky had crawled into the bed next to him.

He stirred, and Jacky’s thin fingers grasped at his nightshirt, his legs wrapping tightly around Niall, and he muttered something in a soft and frightened voice. His hair, black and shiny with grease, fell limp in front of his sunken eyes. He was so beautiful, Niall thought, knowing he was the only one who saw it. He wrapped his arms tightly around Jacky, wishing he could protect him and keep him safe always. But Jacky couldn’t spend every night at Niall’s. He would have to go home tonight. Home to him.

“Niall!” His mother’s voice from down the hall spooked them both awake; Jacky’s eyes flew open in a panic. He jumped away from Niall and hurriedly scuttled under the blankets on the floor as the sound of footsteps grew closer and Niall’s mother pushed the door open.

“Morning, boys!” she announced, and Niall and Jacky pretended to wake up, rubbing their eyes and gazing blearily at her. “Oh heavens, it’s freezing in here; you’ve left the window open all night!”

Well, that explained the chill. She stepped over Jacky, who shrank away from her, to shut the sticky window tight. “Time to get up or you’ll be late for school. No more sleepovers if you’re going to be exhausted the next morning. What time did you boys go to bed last night?” She cocked her head, hands planted on her hips.

Niall and Jacky looked at each other guiltily. “Not that late, Ma,” said Niall. “I dunno. We didn’t look at the clock.”

“Well, get dressed.” She tutted. “Honestly, you boys don’t appreciate me. You think all mothers allow sleepovers on school nights?”

“Well, you’ve got that right. All right, up, breakfast’s almost ready.”

She left, closing the door behind her.

Jacky sighed and lay back on the pillow. “Why can’t I just live here with you, Niall?”

Niall bit his lip. “Well, y’know maybe if you told her, like, what’s going on with your dad—”

“She won’t listen,” said Jacky crossly. “They never listen. I told you. And me dad told me if I made a fuss again he’d hit me harder.” He flinched, his eyes going dark. “He said he’d kill me last time. I told you, Niall.”

“I know, but I bet Mam would let you stay here.”

“She wouldn’t, Niall. Anyway, I don’t wanna talk about it. We’re doing it tonight, aren’t we?”

“Of course I want to!” Niall jumped down onto the floor and grabbed Jacky, pulling him into a tight hug. “Hey, we’ve been planning it for weeks. I’m not gonna back out now.”

“I’m not.” Niall took Jacky by the arms and looked him firmly in the eyes. “I’m not just gonna abandon you, Jacky. Whatever it takes, I’m gonna take care of you. I love you.”

“I know.” Jacky sniffled again, rubbing his eyes. “I just can’t go back there again. I can’t keep lettin’ him—”

“You won’t.” It hurt deep in Niall’s heart to see Jacky cry. He couldn’t stand it. He pulled Jacky to him and kissed him hard, hoping it would stop the tears and take away some of the fear. “Listen, I got it all planned out. Everything’s ready. I’m gonna be there tonight at midnight sharp, okay? We’re gonna do it.”

“I promise, Jacky. I know what I’m doing. I’ve been studying this stuff for years; you know that. Magic works. I’ve tried it. You saw the stuff I can do.”

“Yeah.” Jacky sighed and turned away to look for his clothes. “I hope it works, Niall. I dunno what I’ll do if it doesn’t.”

It was impossible to concentrate at school. Niall’s mind was running through the ritual, remembering all the incantations. He’d be reading them out loud from a book tonight, but he had memorised them all anyway. He doodled the summoning circle in the margins of his notebooks, over and over again, so he’d have it perfect. It had to be perfect.

Jacky wasn’t in any of his classes this year. He had been in years past, but last year Jacky’s grades had slipped, and he’d been placed in learning support. Niall had tried to help him. Tried to make him learn. But his attempts had only been met with acidic responses and eventual tantrums from Jacky. He was smart, but no one could make him learn. So Niall had decided to leave it alone. He would learn when he was ready. And this might just change everything.

Jacky met him at lunch, in their usual spot outside the gymnasium. It was a corner that no one ever came near, so they were in relative privacy. He leaned his head on Niall’s shoulder and sighed. Niall drew him close, savouring the moment of aloneness. “How’s class?”

“Me too. I’ve been practising.”

“I got on the computer a little.” Jacky stiffened a little and leaned away from Niall to grab his bag. “I printed out some stuff.”

“Well, I thought—” Jacky pulled some papers out of the bag, printed articles. “I thought we might make a last-minute change.”

“Who’s the one you want to summon? Densel?”

“Denusel,” corrected Niall. “Well, he seems best; I mean, I looked him up in a bunch of different demonology books, right? He’s supposed to be really good at persuasion and mind control, so I figured he’d be a good fit. Plus, it said he had an even temperament.”

“It’s just…” Jacky frowned, chewing on his nails. “He’s not supposed to be very powerful, is he?”

“He’ll be enough, Jacky; it’s all relative. This is a really simple request, like a small transaction. The more powerful demons are much more dangerous, and they do much bigger stuff.”

“Because I looked it up, and I found this.” Jacky shoved the article at Niall. It looked old like it had been photocopied from a book, but not one that Niall had ever seen before.

“Khireneth,” he read aloud. “Notably powerful demon, recordings include— No, this is no good. It doesn’t say anything about his power level or what he does.”

“It does down here, see?” Jacky pointed. “Look, it says he calls himself ‘Champion of the Oppressed.’”

“Sure, but that doesn’t mean anything; demons are all liars. They’re bad and dangerous unless you know how to contain them.”

“Please. Please, Niall.” Jacky blinked and a tear rolled down his face. “It has to work. There’s no other way. My dad—”

Niall clenched his jaw. He hated that man. And he hated even more that there was nothing he could do. Jacky wouldn’t let him tell the teachers, or the police or anything. Not since he’d come to school with a black eye once in fourth grade, and the teachers had sent a social worker to their house. Niall didn’t know what Jacky’s father had done to him as punishment, but he never talked about it. And when Niall even suggested telling someone about it, Jacky went white as a sheet.

Niall hated feeling helpless. That was probably why he had taken up magic. It gave him a feeling like he had some control over his life; that he could help. And he could help. If this summoning went well, why couldn’t they summon a more powerful demon? The transaction would be the same. And it would be a for-sure thing. 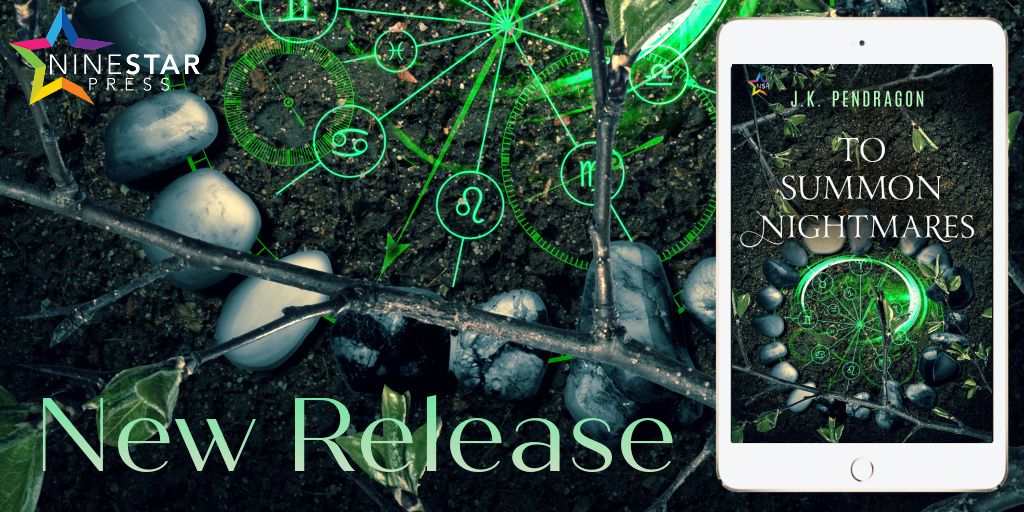 A tale of magic, tragedy, and love… and did I mention magic?

The first bit of the book felt a little disjointed and confusing but once Cohen and Niall meet it starts to make more sense. I loved how protective Niall was from the beginning. What he saw as weakness was actually his strength. He had a huge heart, but it allowed people like Jacky to take advantage.

Cohen was brave, a bit quirky, and completely endearing. I was rooting for him and Niall to find happiness together. They’d both suffered and deserved a fairytale ending… but with the last scene in the book, I’m not so sure that’s in the cards for them. I really hope there will be a sequel.

Overall an action packed read that left me wanting more.

J.K. Pendragon is a Canadian author with a love of all things romantic and fantastical. They first came to the queer fiction community through m/m romance, but soon began to branch off into writing all kinds of queer fiction. As a bisexual and genderqueer person, J.K. is dedicated to producing diverse, entertaining fiction that showcases characters across the rainbow spectrum, and provides queer characters with the happy endings they are so often denied.

J.K. currently resides in British Columbia, Canada with a boyfriend, a cat, and a large collection of artisanal teas that they really need to get around to drinking. They are always happy to chat, and can be reached at jes.k.pendragon@gmail.com.