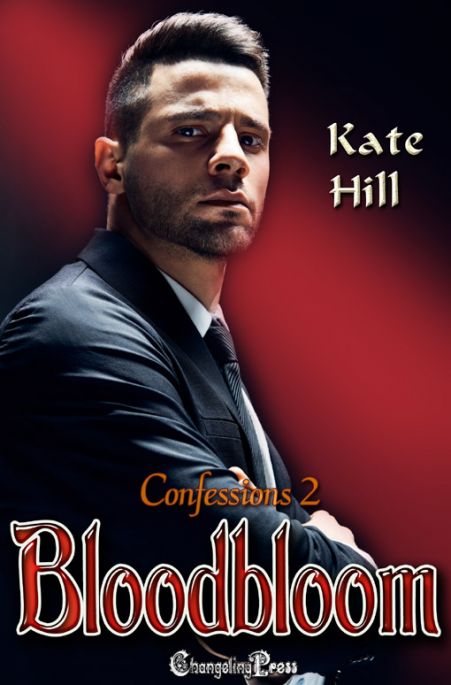 Lance Bloodbloom: For years I’ve served as an agent for the Sovereign Vampire of the USA. Since the demon occupation, I’ve fought on the side of the rebellion. Now I’ve been reassigned to the Savage Sage Club, which is also a safe house for refugees. My dilemma is Cupid — a former prostitute who now runs the club. From the moment I freed him from a sadistic flesh peddler, he stole my heart, but in my line of work, one can’t have a heart. Despite this, when I finally see Cupid again, I doubt I can control my passion for him.

Cupid: The night Lance rescued me from the dungeon where I’d been forcibly turned into a vampire and mercilessly used for blood and sex, I knew I would love him forever. He sent me away, though, to a place where I could recover and build a new life, and I have. I’m no longer a prostitute, and I run a club that is also a haven for members of the rebellion. Lance Bloodbloom is back, and I want him more than ever, so I’ll need to convince him that love is possible, even for a centuries-old warrior.

I stop my car outside of the Savage Sage club and glance at the gray brick building made in the image of a medieval tower. My sigh is more a snort of indignation. Here I am — one of the finest warriors in the rebel army, reduced to nursing his wounds while managing a modern-day brothel.

I can’t keep the wicked smile from my lips. If Lucas heard that thought, we’d probably end up dueling. My bitterness isn’t directed at this place. Not really. It’s just that I’m already restless, and right now my pride stings more than my healing wound.

I received this almost lethal injury while protecting Blaxton, the Sovereign Vampire of the USA. I suppose he thinks he’s being kind, removing me temporarily from his personal guard, or more likely, he can’t have a half-healed soldier by his side. Can’t blame him there, not in this demon-infested world, and not when he’s such an important part of the rebellion.

Fortunately, this is more than a mere brothel. It’s to be a checkpoint in an underground rescue mission that guides the most vulnerable of Earth’s creatures — human and otherwise — to a place called Beaver Bay in New England. It’s only recently that the evacuations have started in the northeast, because until just a short time ago, Beaver Bay was nothing more than a hideaway like most others. Then things changed. Angels now work with the witches of Beaver Bay. Anyone who travels there is whisked away to a refugee camp guarded by angels, where they can safely await the end of the war against the demon occupation here on Earth. Blaxton sent me here to evaluate the club, to make sure everything is as safe as possible. In a few days, an angel, Tad, will arrive to meet with rebel leaders in Baltimore, and I’m to report to them.

It’s been a long trip from Indiana, where the Sovereign Vampire had a meeting with a coven of witches — also part of the rebellion. Demons attacked, and —

And the rest I don’t want to think about, even though the twinge in my chest is an irritating reminder.

I drive into the parking garage attached to the club. A tall Indian man with a shaved head and a long, raven beard approaches. I peer at him over the rims of my dark glasses and offer him my identification.

He inclines his head. “Welcome, Mr. Bloodbloom. Your personal parking spot is over there.”

I nod and he raises the gate so that I can drive in.

By the time I park and approach the private entrance nearby, a nondescript young man in a club uniform approaches my car to take my luggage. The assistant manager and my main contact here waits by the open door.

Cupid. He’s as beautiful as ever. Six feet tall, broad-shouldered and slim, he’s smooth shaven and youthful — not surprising since he was made a vampire at the human age of twenty-two.

I nearly smile. It’s been a long time since we’ve seen each other. I’d arranged for him to come here a little over five years ago. He’s like a different person now — so poised — not like the timid boy I’d found chained and bleeding in a house of horrors.

“Hello and welcome, Mr. Bloodbloom.” He offers a little bow, but his angelic brown eyes hold my gaze with confidence. When we first met, he rarely met anyone’s gaze.

“Hello, Cupid.” I pause in front of him and he continues staring. His heartbeat quickens and there’s something in his scent — something that mingles with his mint cologne and natural musk that takes me aback.

That scent is familiar, but unwanted for our present situation. The last thing I need right now is complications from this beautiful boy. I can only hope that Lucas has trained him well enough to know his place.

“I’ll show you to your room, sir, and then give you a tour of the club. I’m told it’s changed since your last visit.”

Although that visit wasn’t too long ago by vampire standards, it’s more than enough for significant changes, especially considering all that’s happened since the demon occupation.

“That will be fine.”

He motions for me to follow him inside. We stroll down a dark hallway to an elevator. While we wait, I stare at the door, lost in thought. Blaxton didn’t merely send me here to recover, but to see that this place stays safe and operational in Lucas’s absence. He’s currently undercover. While Cupid is quite capable of running the club — and has been for several weeks — he’s not ready to lead a full-on battle against demonic intruders. Yes, the club’s security team is competent, but even they lack my experience.

With Lucas in the front lines at Beaver Bay, it’s not inconceivable that demons discover his connection to them. If he becomes a target, so will everything he holds dear — including the Savage Sage and all who shelter here.

That means Cupid, too.