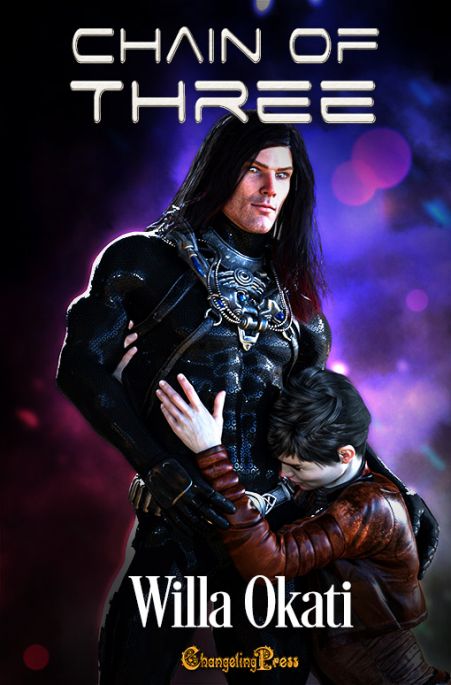 Dane and Julian, ex-war heroes now in the Empress’ service, hate each other. Hate, hate, hate. Problem? Julian wants Dane almost as much as he hates him.

The Empress needs her ex-Marines, but they’re no good to her if they’re at each other’s throats. She thinks she has a way to tame the two by putting them together with Master Anubis, a refugee from Earth.

It’s a three-way battle for dominance, and the Empress knows something she’s not telling…

Note: Chain of Three follows the standalone title Chain of Thorns, but can be read by itself. This title contains elements that may be disturbing to some readers.

“So, you’re pretending to be a human again today, are you?”

Dane grunted in response. In his opinion, a stupid question didn’t deserve any kind of answer. Anyone with two, three, four or more eyes in their head or what they called a head ought to know better. Of course he’d shifted into human shape. He wasn’t stupid.

The Empress hadn’t exactly ordered Her subjects to assume the images of the humans She adored and fell passionately in love with. However, anyone who wasn’t too dumb to come in out of the rain knew they’d better wear the right “uniform” unless they had an itch to annoy Her.

You really, really didn’t want to annoy the Supreme Commander of a thousand-plus starships and a million trained warriors.

Besides, he’d decided to lounge by the pond in the garden of his new quarters that morning and tentacles had a nasty tendency to develop vicious sunburn. “Getting a tan” the earthfolk they’d rescued from their doomed planet called this practice. They’d said it was relaxing and made them look more attractive to those they wanted to mate with.

No, those they wanted to fuck.

If Dane was going to play human, then he’d damn well get the details right. Mating and fucking were completely different concepts. One of the new traditions most of his countrymen and women liked best when it came to playing human was the idea of fucking without having to tangle themselves up in mating.

“Fuck.” An interesting word you could use in almost any sentence.

Dane paused for a second to appreciate the amazing range of human obscenities, otherwise called “swearing,” “cursing,” or “cussin’.” They worked great when a guy didn’t really know what else to say.

Speaking of which, Dane decided getting a suntan was probably a piss-poor waste of time. He couldn’t figure out why anyone would enjoy damaging the pigmentation of their skin by sitting in the sun all day, but as the earthfolk also said, what the hell? He didn’t have anything better to do. Not since he’d been “honorably” discharged from the military, sent back to their home planet for recuperation, and then…

Raising the middle finger of his human-shaped hand, Dane pointed it where he figured Julian would be standing. Another handy earthfolk trick, cussing with hand signals.

Julian hooted. “Up yours too!” He made the suggestion in cheerful good humor. Probably purely for the sake of annoying Dane. He never took offense at anything Dane did. He treated every barb and sting like some big game. Prick. “You’re cranky today, old man. What flew up your ass?”

Dane grunted again as his only answer, deciding if that wasn’t good enough for Julian he could go screw himself.

Mmm. He really, really loved human profanity. So rich, depending on culture, and so satisfying. He and Julian both studied the underground lists of new phrases together to figure out what they meant, bitching at each other over who got to read first if they didn’t both have a copy. The time when Julian insisted “son of a bitch” meant the same thing as “son of a motherless goat” had resulted in a fight of amazing violence and duration.

In the end, the Empress Herself gave them a tongue-lashing of Her own and sent them to their rooms to stand with their noses in the corner until they learned to behave like men, not children.