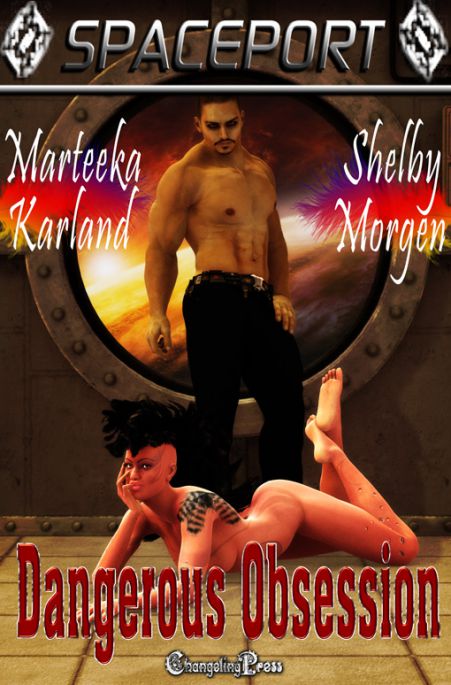 When famed negotiator Mikhail Dreslin and his crew head to ‘Port Adana for a little R & R, the last thing he expects is to have an exotic runaway drop into his arms.

Joiandra is neither as harmless nor as innocent as she appears, though she plays the role well. Who and what she is is a mystery Mikhail will have to solve if he wants to keep her, and the longer he holds her the less he wants to ever let her go, but who’s playing whom in this dangerous game?

Looking for the perfect vacation paradise?
Be sure to visit Xanadu,
Trilion’s premier Pleasure Dome,
Where your every fantasy comes true.
Xanadu.
Everything you’ve ever wanted… and more.

Beyond the sheltering glass of the Haze’s port windows, the nebula glowed with an eerie quality that made a frisson of fear flutter down Joiandra’s spine. There was something out there… something evil. The constant, quiet din of the everyday workings of the space station did nothing to soothe her frazzled nerves. She couldn’t shake the feeling that someone was hunting her.

Someone. Or something. In fact, she felt a bit like dinner. She should have expected this. No one left Xanadu. No one. Ever. At least, not if you were born into the life. Others would kill to get what she was running from.

Turning back to the bar, Joiandra ordered a Red Rooibos, an old Earth drink. Exotic, but non-alcoholic. She needed to keep her wits. She didn’t want to run. Not again. She’d built something here. Something that was her own. But run she would before she’d go back.

Most people who knew the place wouldn’t have described the Haze as safe, but tonight it was her best refuge. Plenty of witnesses about, in case this was more than just paranoia. Plenty of men. Big, strong men. One of them would surely be willing to defend a helpless woman.

She didn’t like the role, but it was one she knew how to play.

Waiting wasn’t one of her strong suits, but then again, neither was hunting. If push came to shove, she could defend herself, but she’d much rather ply her other trades than kill. The end result was much more pleasant. And profitable. Men with money would pay well for the company of a Trilion pleasure slave. Ironically, now that she’d run she was forced to resort to the very line of work she’d tried so hard to escape.

Joiandra really wanted to believe the small voice telling her to run was overreacting. She was used to men watching her, after all. But the feathers on the back of her neck stood up in a flutter like they’d been hit by a warning breeze.

She scanned the Haze anxiously, trying to be discreet, but needing to identify the source of the threat.

“Can I buy you a drink?” Something with a little more kick than that, his gruff, husky voice implied.

Joiandra turned and looked up — and up. She wasn’t exactly tiny, but this man towered over her. Tall, dark, and handsome was such a cliché. Except when it came bundled in black body armor, with a laser rifle and a belt full of shock grenades. What the fuck was he? Obviously military, but she didn’t see any insignia. Not AP Security, then. Merc, maybe? Everything about him screamed dangerous motherfucker. He could probably break her in half with his bare hands.

She started to ask his name, then thought better of it. She didn’t want to know. She wasn’t looking for commitments. Just a night she could call her own. “I hear the Haze offers real Jamaican Rum if you know who to ask.”

His handsome face split into a slow grin, and her pussy clenched a little. The man really was handsome. If you overlooked all that deadly weaponry.

“I think I can manage that.” He nodded at the bartender, who set down the glass he was polishing and went beneath the bar for her request.

Small talk wasn’t necessary. Not when rum was involved. Her merc seemed to convey everything he wanted with the smoldering look in his eyes. Sex. And plenty of it.

“Make it to go,” she told the bartender, her gaze never leaving Mr. Dangerous. “Do you have a room?”