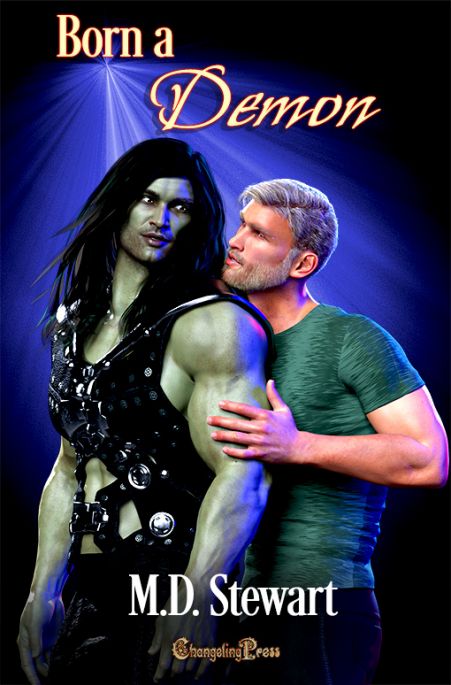 Conner: I’m a reporter who’s seen horrors, but I faced them all without flinching. Despite everything — including a mother who thought I wasn’t quite human — I was happy with my life, my friends, my parents and my job. Then I met Rager, a demon from a different dimension. I never thought I’d want a future with another man, but I want one with him. I can forgive his past transgressions, but he has to trust in me and our love. Is happiness really possible when I learn my entire life has been a lie?

Rager: Centuries of loneliness led me to make huge mistakes. I believed the wrong person, an innocent child was nearly kidnapped, and I almost killed a man by forcing my Mating Mark on him. As punishment, I’ve been sent to the Mortal Realm, where I’m helpless without my powers. Now I’ve met Conner, but I know he deserves a better mate. Can I help him accept the truth about himself, or will it tear us apart? And will my Queen allow me happiness after all the mistakes I’ve made?

or pre-order for January 17th at retailers

I looked at the light as it floated in the trees near Hecate’s castle, feeling indifferent about my banishment to the Mortal Plane. I didn’t care where I went or what happened next. My life had had no meaning in the last half century anyway.

I was truly alone and felt even more so now that my bond with Te’Garth had broken. I’d come so close to a mate, only to be denied.

My loneliness was a living, breathing thing inside me. I no longer hoped my barren existence would change. Especially now that I was being sent to the Mortal Plane, where I’d be stripped of my power and at the mercy of humans.

I turned as Queen Hecate approached with her Hellhounds on her heels. “Nice doggies,” I sneered at the Hellhound shifters, hoping they’d attack and rip a hole in me somewhere. At least I’d feel something.

“Don’t bait my hounds, Rager. That’s bad form, and you’re above that.” She raised an eyebrow. “Do I need to leash you, or will you be on your best behavior?”

I didn’t want to be sent into the Mortal Plane with more humiliation than I’d suffer anyway, so I simply shook my head. The silver leash wouldn’t burn my skin in the human world, but Hecate could still keep track of me and punish me with pain through the device. “I’m at your mercy, my queen. And those for whom I’ll…” I nearly growled but cleared my throat, “…I’ll serve.”

“Yes, you will be. Josiah and Matson need someone to help them, as their bed and breakfast has grown. You’ll learn about serving others from them. They can contact me directly if they need me.” Her eyes narrowed, flashing dangerously. “Don’t make them do that, Rager. This is your one chance to redeem yourself. Young Te’Garth saw something inside you that warranted a second chance, and I went with his assessment. You’ve done enough damage to him, and several other mortals as well. Now is the time to heal those wounds.”

I fought the sigh and forced a blank face instead.

“All right, come along. Do not make me regret this decision, Rager.”

I didn’t bother to remark that I was already regretting it. The light grew as we stepped closer to the gateway, and I could see a room with a large overstuffed couch and bright sunlight shining through the windows.

A yellow sun. That would take some getting used to.

As I stepped through the portal, I looked down, shocked at how my appearance had changed. My skin was a weird, sickening, pale whitish tone. To make matters worse, my Queen had either grown a foot taller, or my body had shrunk. No one else was present in the room, but I could hear voices elsewhere in the abode.

A human male stepped into the room. He was shorter than I was, with dark, wavy hair and bright blue eyes. He bowed low before taking Hecate’s hand and bringing her fingers to his lips.

“Josiah. This is Rager.” She inclined her head toward me, and I watched as the man’s eyes widened.

“Is there a problem, human male?” My voice didn’t sound nearly as intimidating as usual.

He blinked before he grinned. “Nope. You appear different than how I remember Terran Demons look, but there’s no problem. And lesson one here on the Mortal Plane; call people by their name if you know it. ‘Human male’ isn’t something people say when they refer to each other. My name is Josiah Ashby.”

“And I’m Matson, his husband.” A red haired man stepped into the room. He was taller than I was, which was a new experience for me. He was also heavily muscled, and judging by the way he wrapped an arm around Josiah, he was staking a claim on the male. “This is our home as well as our business. Lesson two is that you will respect our guests and us, or you’ll be sent back to Hecate for whatever punishment she has in mind. This is your second chance. The first infraction you make, you’re gone. Am I making myself clear?”

“Clear as the Lake of Valhalla, Matson Ashby.”

“Good. And it’s just Matson. We’ll discuss human customs later. I have a reporter coming to cover our business for a spread in the local newspaper.” Matson kissed his husband’s temple just as the front door of the establishment opened, and a young human male stepped into the room.

He was about my height, with hair the same brown color as the sand surrounding my home and eyes the color of the lavender jewels on the hilt of my ceremonial sword. My body reacted.

I took an instinctive step forward to claim the male before a feminine hand slammed into my chest.

“No. You’re here to serve and learn. Stand down, Rager.”

My body started to vibrate as my soul fought to leave my body and join the male who stood staring at me with a smile on his face.

My vision tunneled as I stared at the straight white teeth and soft tanned skin of the human. I heard no sound but the sound of his breathing. I licked my dry lips, and I wondered if the yellow sun on this realm had done more to me than leach my power and change my appearance.

Until he spoke, and my world seemed to implode at the sound of his voice. “I’m sorry, I didn’t mean to intrude. I’m the reporter from the Charlotte Observer. I’m here for the interview.” He held up a black case, then reached inside his shirt and pulled out a black cord attached to a shiny rectangle with his likeness in the corner. “My name is Conner Thompson.”

As Matson and Josiah greeted the gorgeous male, I backed away until my back hit the wall of books. The portal didn’t open to allow me to escape. My heart tumbled in my chest.

After all these years, I had what I craved, but could never have.

Get more books from M.D. Stewart at Changeling Press …

You can find M.D. at the listed links, and you can also check out her Pinterest.