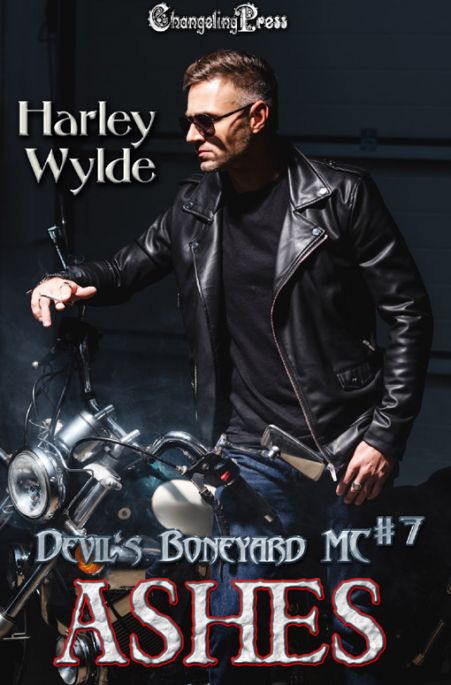 Nikki – Being tortured and watching the father of my child die has scarred me. There are deep wounds etched into my soul that no one can possibly understand. They think I loved him, that I’m mourning, but I’m not. The horror of that day lurks in the shadows of my mind, and I can’t seem to break free. Not until Ashes drags me to my first ultrasound and I see my son for the first time. I owe it to him to do better, but it’s too late. I’ve lost my job, and I’m losing my apartment. I should have known Ashes would swoop in like a knight on his shining Harley to save the day.

Ashes – It’s my fault that Nikki lost Bane, that their kid will grow up without a dad. My cousin is responsible for what happened to them, and I can’t undo that pain. So instead, I take care of Nikki the best I can while trying to maintain some distance between us. I’ve loved her for years, but I can never tell her. Renegade, the Road Captain for my club and her brother, would kill me if he knew that Nikki plagues my thoughts day and night. I never counted on taking her home with me, or getting caught in the shower with her. But our happy-ever-after wasn’t quite in reach. When a series of events nearly tears us apart, I vow that I’ll do whatever it takes to get back to her. It never occurred to me that she’d be the one to save me.

I hated seeing Nikki like this. What should have been a joyous time for her only made her sadder. Losing Bane, especially in such a brutal way, had done a number on her. It had been half a year since his death, and still she was barely living. None of us had a clue the two had been so close. Even her brother, Renegade, had been kept in the dark. I’d made it my responsibility to keep an eye on her. If it weren’t for my addict cousin, then Bane would still be alive, and Nikki wouldn’t be facing motherhood alone.

Her belly swelled with her kid, hers and Bane’s, and I thought she was pretty damn adorable. Even when she hadn’t showered in a few days, there was just something about Nikki that made you look twice. She wasn’t stunning, or gorgeous like the women in Hollywood, but the girl-next-door look was really doing it for me. Not that I would touch her. I had no right. Besides, she was still mourning the loss of Bane.

“Hey, Nik, your calendar says you have a doctor’s appointment today. Shouldn’t you be getting ready?” I asked as I leaned against the entryway to the living room.

“Nik.” Moving farther into the room, I hunkered in front of her, slowly reaching for her hand. I gave it a slight squeeze, pulling her attention to me. “There you are, pretty girl. Come on. You need to shower and dress for your appointment. I’ll give you a ride.”

I nodded. “Doctor. Have to check on the kiddo and make sure they’re all right.”

Her eyes turned glassy with unshed tears. “I’m supposed to find out the sex today. I get to see my baby and I…”

I reached up and wiped away the tear that slipped down her cheek. “I know, sweetheart. I know. I’m so damn sorry Bane can’t be here for this, but you don’t have to go alone.”

I’d like to think Bane would have been with her every step of the way, but I honestly didn’t know. He’d enjoyed the club pussy as much as anyone else. The fact he’d been with Nikki, and she was the sister of our Road Captain, made me think he’d been more serious this time. If he hadn’t died and he’d fucked around on Nik, then Renegade would have gelded him.

She gave me a slight nod and I helped her stand. Not trusting her to actually take a shower and not just crawl back in the bed, I led her down the hall to her room. I’d picked up a bit the last time I was here, but the place already looked like a cyclone had hit. From what I knew of Nikki, she’d been something of a neat freak before losing Bane. The men who took her had beat her pretty bad, but even worse, they’d made her watch as they tortured and killed Bane, a Prospect no one had realized she was seeing.

I went into her bathroom and turned on the shower, set out a clean towel for her, then stepped out. Nikki shuffled past me, more zombie than human at the moment. I left her to it and started picking up the mess in her room and stripping the bed. When I turned to shove everything in the hamper near her closet, I sighed and stared at her. She was still standing in the bathroom, vacantly looking at the shower.

She needed help, but she refused to go talk to a shrink, and Renegade insisted she’d be fine and to leave her be. I couldn’t, though. Either my brother wasn’t aware of just how bad Nik had gotten, or he was choosing to ignore it. I understood he was preoccupied with his new woman and daughter, and the kid they had on the way, but that didn’t change the fact his sister needed him. I could go to the Pres and ask him to speak to Renegade, but I didn’t want to do that. Nikki needed someone, and I was happy to help. I considered it penance for my fucked-up cousin being responsible for what happened to Nikki and Bane.

“Nikki, I need you to take a shower and get ready for your appointment,” I reminded her again.

When she still didn’t move, I knew I’d have to take things further than I should. I reached up and eased the elastic from her hair, letting it tumble down her back. Bracing myself for however she might react, I reached for the hem of her shirt and slowly started to lift it, hoping like hell she’d snap out of it and shove me away, then undress herself. Her bare breasts came into view, and I slammed my eyes shut, and cursed the fact I was getting hard. It was all kinds of fucked up. I managed to get her shirt off, then shoved her pajama pants down her legs. Settling my hands on her hips, I noticed she hadn’t been wearing panties. It was tempting to let my hands wander over that smooth skin, but I held back.

I brushed past her and tested the shower water, warming it a little more, before I reached back and took her hand. I tried really fucking hard not to look anywhere but her face as I stuck her under the shower spray. She sucked in a breath, her eyes going wide, and I could tell the moment she was coming back to the present and getting out of her head.

“Yeah, Nik. Just… shower, okay? I’ll put some clothes out for you, then wait in the living room.”

My gaze dropped to her breasts, and I knew it made me an asshole, but I couldn’t seem to stop myself from going even lower. The swell of her belly made my fingers twitch as I fought the urge to reach out and place my hand there. Nikki seemed to read my mind and reached out, taking my hand in hers, then pressed my palm to her belly. I stared a moment before looking up to see her watching me.

“It’s okay if you want to feel the baby,” she said. “You’ve been here every week helping take care of us. It’s almost more your kid than Bane’s.”

I shook my head. “No, Nik. The baby is yours and Bane’s, and everyone knows it. The kid will know it too. We’ll all tell him or her about their dad, and how he died trying to save you. He’ll be a hero in his kid’s eyes.”

Ah, hell. I could handle about anything, except tears. I slipped off my cut and laid it on the counter, then toed off my boots. I stepped into the shower and gathered Nikki in my arms, not caring that I was getting soaked. She cried and clutched at my shirt. It was all kinds of fucked up that she was naked, and my dick was more than aware of the fact. If Renegade saw me right now, he’d kick my ass.

“Everything’s going to be fine, Nik. You don’t have to do any of this on your own. The club is behind you one hundred percent. You know that, right? It’s not just Renegade. We’re all here for you.”

She sniffled and looked up at me. “No, not everyone. Just you. My brother hardly comes by, and I never see the others unless I go to the compound.”

I bit my tongue before I said something I shouldn’t. I’d thought long and hard about her situation. The fact she lived alone and didn’t have anyone to check on her, other than the club, meant that she’d be safer at the compound. If anything happened, it would take too long to reach her. Hell, that was if anyone even knew she needed help. I wanted her to move behind the gates, but it wasn’t my place to say anything. She wasn’t mine.

Harley Wylde is the International Bestselling Author of the Dixie Reapers MC, Devil’s Boneyard MC, and Hades Abyss MC series.
When Harley‘s writing, her motto is the hotter the better — off the charts sex, commanding men, and the women who can’t deny them. If you want men who talk dirty, are sexy as hell, and take what they want, then you’ve come to the right place. She doesn’t shy away from the dangers and nastiness in the world, bringing those realities to the pages of her books, but always gives her characters a happily-ever-after and makes sure the bad guys get what they deserve.
The times Harley isn’t writing, she’s thinking up naughty things to do to her husband, drinking copious amounts of Starbucks, and reading. She loves to read and devours a book a day, sometimes more. She’s also fond of TV shows and movies from the 1980’s, as well as paranormal shows from the 1990’s to today, even though she’d much rather be reading or writing.
You can find out more about Harley or enter her monthly giveaway on her website. Be sure to join her newsletter while you’re there to learn more about discounts, signing events, and other goodies!
Website: harleywylde.com