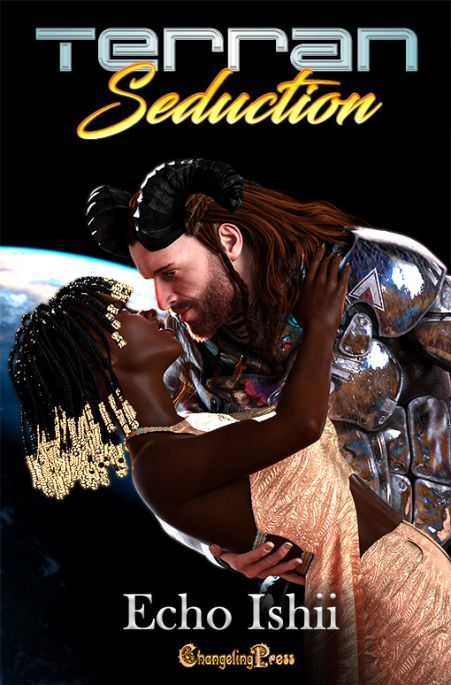 Diana Aventina is a ranking senator serving the Terran Republic. Her lineage is one of power and influence. She’s courted by powerful men for a bloodline match, but hasn’t found anyone suitable. Power means sacrificing everything for a higher cause, even love.

Brennus is a legendary commander picked to lead all the armed forces. On the mysterious wintry world of Sobek he’s discovered a weapon that may change the future of the Terran Republic. His star is on the rise, and he wants a powerful woman like Diana by his side.

But the weapon might not be all it seems. And a new line of Terran soldiers threaten the stability of the Republic. Brennus and Diana can’t fight their desire for each other, but they may lose the Republic in the process.

“How long has it been?” Diana Aventina looked up from her desk toward a young Terran legion soldier. He was a tall, strong young man with a crew cut and two short horns, like all Terran-bred soldiers. A star shaped cybernetic implant was buried deep in his neck.

“We’ll keep waiting,” Diana replied, turning her attentions back to her work. She wasn’t going to show her annoyance. Not yet.

She was here with Governor Kent and his handpicked Red Star fighting unit on the icy cold world of Sobek. The command center was barely more than a converted supply depot. The heating system was rudimentary. Too hot in the living quarters; too cold everywhere else.

The howling winds beat against the outside doors. Her seat was furthest from the door, but still the cold crept in somehow. She shifted in her seat and clasped her hands to warm them. Even with gloves, her fingers still felt the cold.

In front of her, Governor Kent paced back and forth, hands behind his back, his nose reddened by the cold. He sniffled. He stomped his feet as if to get circulation going. Kent mumbled something Diana couldn’t hear, but she had a fair idea that it wasn’t complimentary.

“Commander Brennus better have an excuse for being late,” Governor Kent said.

Kent lowered his voice. “If he takes the job.”

“He’ll be the official leader of the entire Terran Republic military. I suggest you get on his good side.”

No one expected Sobek to have long-term value. The first mission here a decade ago had ended in disaster. The native Efret wavered between indifference to outsiders to bursts of open hostility. Sobek wasn’t a top priority for anyone at Terran Republic Headquarters. But Ambiorix Brennus was a legend. He had an outstanding war record. He had exclusive access to alien weaponry. Senator Diana Aventina wanted to see him for herself.

Kent stopped his pacing. He leaned down toward her so close she could smell his cologne. She gave Kent a once over. He came from a strong bloodline. He had blue eyes, blonde hair, and good bone structure. The same floor-model attractiveness shared by thousands of others who had the breeding and connections for top quality bodywork. Nothing special really.

He glanced at the young soldier next to them. “This is the future. Hedron. One of my best Red Star soldiers.”

Hedron replied with a blank stare.

“We’ll see about that,” Diana said. She wasn’t as impressed with these Red Stars as Kent was. They just needed to do their jobs.

A loud thudding noise startled everyone into attention. The doors began to creak open, tiny icicles dropping to the floor. The Red Star soldiers assumed formation, sensing the approach of danger.

Two of the soldiers, muscular young males, approached and pulled the doors open. They stood aside and waited.

“What’s going on?” Kent asked, vocalizing what they all thought.

Diana listened. There was faint sound of footsteps. She glanced around. She saw something. A sliver. Like one of the silverfish images your eyes make when you grow tired. She blinked. “There’s someone here,” Diana said.

As if on cue, a male soldier stepped forward and pulled out his fighting lance. A ghostly image flickered into view. It wrestled away the lance, and threw the young soldier across the room in seconds.

“Full alert,” Kent shouted, backing away. The other soldiers stepped forward with techno lances at the energy. The whir of energy pulsing through the weapons echoed in the room.

Then, she felt it. Body heat. Next to her. The sound of breathing. She felt a firm hand was on her back. She smiled. It was true. They had discovered invisibility cloaks.

The invisible warrior materialized in an instant. First a shimmer, then the fullness of a thick cloak came into view and dropped to the ground. Ambiorix Brennus.

There was a moment of stillness in the room as if the others didn’t know how to speak. As if they were all unable to take him in. He was a legend, even among Legion Commanders.

Brennus was almost seven feet tall with wide shoulders and a powerful stance. His traditional legion armor was enhanced with thick fur pelts. He carried his fighting lance in his right hand and wore his Terran Republic shield bracelet on his left. His hair was long, a rusty red brown with a thick, full beard. It wasn’t standard military cut, but then Sobek was a wintry world. And Ambiorix Brennus set his own standards.

Diana was transfixed by his horns. Strong, thick bull horns, shined to a polish, decorated with carved runes. Whether or not anyone would call Brennus handsome was a matter of taste, but there was no doubt he was magnificent.

“I apologize for my delay,” Brennus said in a deep, rich voice.

MORE FROM ECHO AT CHANGELING PRESS …

Echo Ishii loves to write stories of the fantastic — from high fantasy to high tech and everything in between. She is a long time science fiction fan, as well as a fan of all things fantasy and paranormal — classic sci fi movies, shows, and even radio dramas.