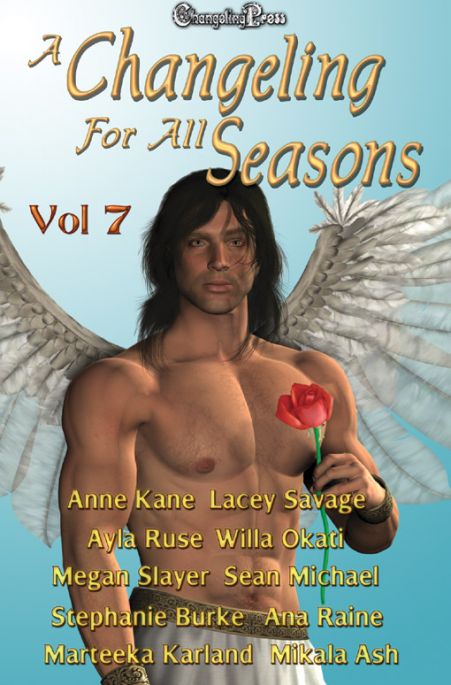 Ten tales of Seasonal Magic from your favorite Changeling authors!

Reindeer Sex Games by Lacey Savage: When a dead-ringer for Santa Claus barges into the room claiming Nikki has ruined Christmas, she’s got a lot of explaining to do…

Ribboned by Megan Slayer: Raven Elf has his sights set on Daria. The hard part is convincing her that their connection is meant to last.

Mistletoe Madness by Mikala Ash: An ancient tradition on a new world. Will it bring love or disaster?

Hearth and Home by Ayla Ruse: Will the sparks between the three be enough to create a happily ever after this Christmas Eve?

Valentine’s Vow by Willa Okati: True love comes where you’re least looking for it… and where it’s been, all along.

Ticket to Ride by Ana Raine: Addison never thought he’d be into kinky sex, but he’d do anything to please Taylor.

Cupid Gone Weird by Stephanie Burke: Cupid only wants a little revenge on Chris Cringle, but no one can really tell what will happen when Cupid Goes Weird.

Special Order by Sean Michael: Brad bakes some special cupcakes to spicing up his and Sandy’s love life. It just might be a very happy Christmas this year.

Ribbons and Lace by Anne Kane: All Leonardo wants for Christmas is a sexy little elf!

A Gift for Wulf by Marteeka Karland: To protect her beloved forest, can Nadia gift herself to Wulf the Feared?

Publisher’s Note: The novellas in A Changeling For All Seasons 7 (Box Set) have been previously published.

“…a seriously a very well written, fun romp for Christmas. Very hot. I wanted to go out and jump in a snow bank. That kind of hot and steamy.”

“This is a fast-paced story that is filled with several sizzling sexual encounters between the two main characaters. I liked Daria. She is intelligent and very sassy.”

Praise for Hearth and Home

“I thoroughly enjoyed reading about the sexual encounters between Nikki, Kobol and Braun and loved how adventurous Nikki is right from the beginning. There’s no shyness or discomfort in her sexual desires and I think that alone is something enviable.”

“Ms. Okati created a relationship that was so typical of life that I just had to grin… A sensual tale of love, even if the men involved are too stubborn to admit it. Highly recommended.”

— Ayden Delacroix, In the Library Review

Praise for Ticket to Ride

“…a wickedly delightful gay romance that somehow manages to instill a feeling of nervous anticipation for the reader. I know it’s marketed as a Christmas story but in reality it’s a fun title to read any time of year.”