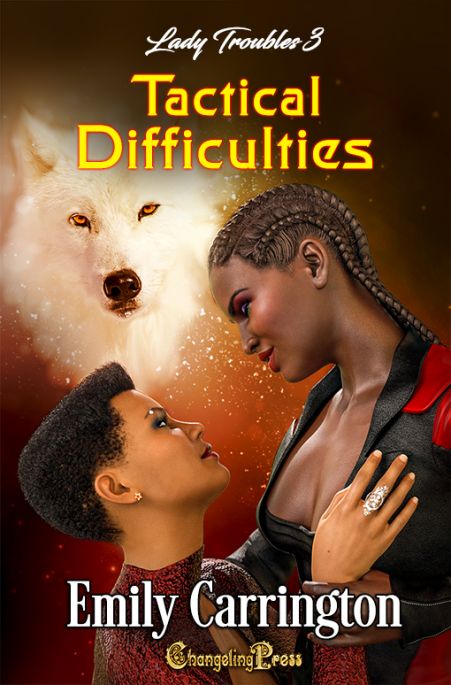 Work and pregnancy are driving Sonya crazy. Her mate’s concern about her well-being isn’t helping because that concern takes the form of overprotectiveness. But when Sonya is kidnapped, she finds strength in herself and her mating bond that she never knew existed.

Maxine stared at her mate. Sonya was lovely, of course, with her cocoa dark skin and cap of short, kinky, beautifully natural hair. Her skin was two or three shades lighter than Maxine’s and her eyes were a breathtaking honey brown. She was even more attractive today because her gaze shone out with triumph.

But how could she feel that way? The LGBTQ psychic werewolves were being discriminated against. Just like always. And this time, it was their own leader who was doing it. And Sonya might be human, not a werewolf like Maxine, but didn’t she understand the plight of her pack family? Her eros, meaning LGBTQ, pack family?

“Tilthos Charles is giving the basilisks permission to overlook us,” she said slowly and rather more loudly than she meant to. “Sonya, don’t you understand that? He’s saying, ‘sure, ignore and belittle a subsection of my people. That’s just fine.’ And you’re sitting there… smiling!”

Sonya’s grin became a smirk. “It sounds like you’re gainsaying the alpha above all alphas.”

Maxine started to speak. “Okay,” she said carefully, “that is what it sounded like. But he’s not here to listen in and…” She shook her head, her braids thumping gently against her shoulders. “What I really don’t get is why you’re happy about it.”

“Because, quite frankly, my dear, it won’t last. The basilisks want to shoot themselves in the foot by not including the most willing participants in their little genetic experiment? When all the packs in North America were polled, it was the eros packs who responded most positively to giving their DNA. All werewolves should respond favorably because learning about basilisk reproduction could conceivably help werewolves carry pups more easily. But if the straight wolves are reluctant because of tradition or secrets or secret traditions? And if the basilisks only want straight DNA?” She laughed. “Let them fuck themselves over.”

Now Maxine saw the joke and she chuckled. Then she asked her beloved, “Will you make love to me?”

Sonya’s eyes widened playfully and her humor was replaced with a devilish look. “How fast can you get undressed?”

It actually took a few minutes because as Maxine removed each article of clothing, shoes and socks, jeans shorts, bikini panties, and skintight T-shirt, Sonya wanted to stroke the newly exposed skin.

Maxine paused dramatically before taking off her bra and fake boobs. Maxine was a transgender wolf, a male to female that would have been called a transwoman if she’d been human. She thought of herself as female, even at the times when her cock ruled her head, because she was not a guy no matter how she’d been born. She’d figured out her transgender self when her name was Maximillian and that little kid had been seven. This had been a good century before the word “transgender” was even in use.

They were at a pause, with Maxine’s fake boobs on the nightstand. Maxine tried to push past the memories, but Sonya had already seen something was up. She’d stopped her striptease and was patting the bed next to her, inviting Maxine to sit.

“Tell me?” Sonya offered softly. And she took Maxine’s hands.

Maxine looked down at the beauty of their two skin tones. It was sort of like looking at a wood carving. Somehow majestic even as it was soothing. Also, this time with Sonya was undeniably theirs, something no one could take away.

“Hush. Time with you is never wasted.”

Maxine eased beneath that gentle murmur. “I don’t usually give a shit about my penis and balls,” she said. “And I don’t really now, except that they made you pregnant.”

That was one of the things Maxine loved about her. Leaning forward, she kissed her mate, slipping her tongue into Sonya’s warm and welcoming mouth. When she had the strength to go on, she sat back. “I don’t regret our coming pups. Never think it. But I’m feeling sort of guilty for the sperm that took over your body.”

Sonya grinned but she sounded absolutely serious when she said, “I love you for saying so, Maxine. You’re such a woman when you say things like that.” She did laugh then. “And here I thought I wasn’t a lesbian.” She rested a hand on Maxine’s thigh and then ran one finger up the half erect shaft between Maxine’s legs.

“I’m so lucky to have a trans wolf with a female’s heart, a male’s parts, and a warrior’s spirit in my bed. Don’t regret what I’m glad happened.” She colored a little, and then she stood. “Now, will you let me finish stripping for my mate? She’s made me wet and I want to lose my underwear.”