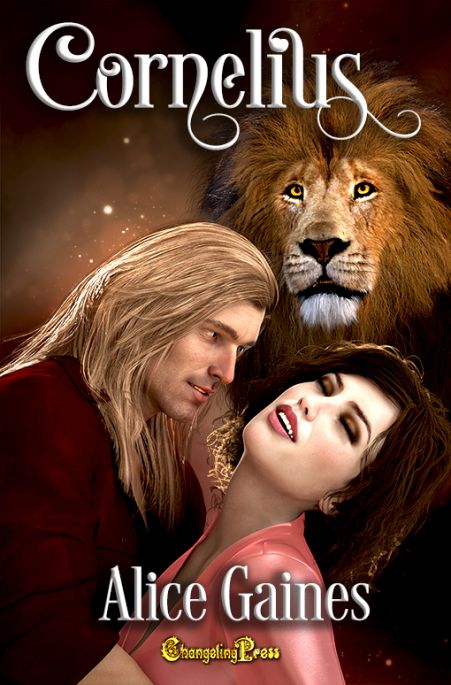 SueAnn has always been terrified of parties and other gatherings with lots of strangers. So, when she’s mysteriously whooshed away into the middle of her favorite computer game, SexScape, she’s more than alarmed to discover she’s landed in the middle of an ongoing party. And there’s a lion! And there’s also a man who treats her to sex better than she ever thought possible.

Cornelius feels SueAnn can be the right mate for him. Unfortunately, SueAnn’s pet cat turns out to be a shapeshifter who is not about to give up her hold on her beloved owner. Can a lion beat out a house cat to win the heart of a human woman?

Victory lay within her grasp. One more move, and SueAnn would conquer level 1023 in her favorite game, SexScape. She’d battled this one for days, and now she could savor success. After all, SexScape was the closest thing she ever got to sex, so she might as well enjoy it as late into the night as she wanted. She’d nod off all day at her desk tomorrow, no doubt, but boredom accomplished that easily enough without lack of sleep.

She’d just raised her hand to finish off the level, her finger poised over the last three red tiles she needed to win, when about ten pounds of fur landed with a plaintive meow right next to her hand. She quickly grabbed her cat into her arms.

Kitty had obviously done something right because the game board lit up telling her she’d conquered level 1023, despite her pet’s interference. She let out a whoop of victory. She’d have to figure out a way to celebrate. A glass of wine with dinner tomorrow, maybe. The expensive cat food from the tiny cans for Kitty.

Before she could make up her mind on all that, the room started spinning, the walls melting in on themselves. All the air seemed to whoosh out of the room, even though SueAnn could still breathe. Then, she found herself falling into a lightless tunnel. She held on tight to where her cat had been. “Kitty, are you there?”

The answer came in the form of a hiss and the prick of twenty sharp claws into her arms and chest. Yeah, Kitty was still with her, wherever they’d gotten themselves. Was this part of SexScape? Some kind of sensory deprivation, whirling ride? SexScape didn’t deprive your senses. It enhanced them, according to its advertising. At least, she was still breathing, and she had her cat.

After a bit, a spot of light appeared ahead, and her body took on a sense of direction — toward the light. As the brightness expanded, colors started to take shape. Figures appeared. People in costumes, many with drinks in their hands, dancing to raunchy music. Some dream version of a party. And then she ended up dumped on her bottom in the middle of it, now holding Kitty in her lap.

Hands reached down and hauled her to her feet.

Suddenly, they were all standing around her, staring at her, and she was only wearing her pajamas, having gotten ready for bed just before the game had picked her up and sent her here. She never went to parties. In fact, she avoided crowds whenever possible, even visiting the supermarket at odd hours. And she’d never allow herself to be seen by strangers improperly dressed. She clutched Kitty to her chest as if the cat could protect her from all of them.

They didn’t appear aggressive or meaning to threaten her. They smiled at her in welcome, but that didn’t keep her heart from pounding and her throat from going dry.

“Neat costume,” a young man dressed as a pirate said. “Is the cat part of it?”

“Let me guess.” Another man — this one in surgeon’s scrubs — stroked his chin as he studied her. “The cat is a companion animal.”

“It needs a drink.” The first man turned around and grabbed a glass from someone behind him. He held it out to her. “Here you go.”

“Kitty doesn’t drink,” she said. “If someone can point me to the way out of here, I’ll leave you all to have your party.”

“I don’t drink. Honestly.” When he shoved the glass toward her, she took it, but she would have had to release Kitty to drink, and that wasn’t happening.

“Drink, drink, drink,” a chant went up. There had to be at least twenty people here, and they all wanted her to drink. Only sheer terror kept her from total humiliation. The music continued, and several partygoers hefted their own glasses. An introvert’s definition of pure hell — being the center of attention of a bunch of strangers while dressed inappropriately for a serious session of eat, drink, and be merry. What had she done to deserve this?

Then, a roar filled the room. Not the roar of a crowd, but a real one. Everything stopped, even the music, and the partygoers parted to make way for… oh, Dear Lord… an honest-to-goodness lion headed right toward her. A male with a full mane. A magnificent beast, but also capable of tearing her apart as if she were made of paper. He roared again, rearing his enormous head back and exposing his teeth.

“The Party Animal,” someone else said. “Now, we can really get going.”