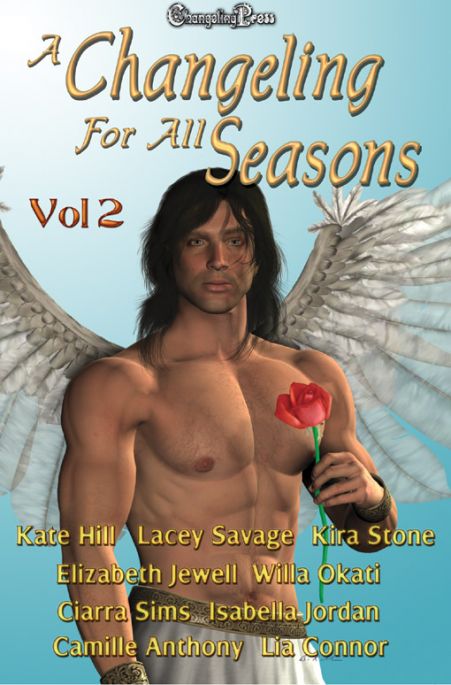 Nine tales of Christmas Magic from your favorite Changeling authors…

Holly’s Jolly Christmas by Ciarra Sims: Dear Santa, I need a man. Not a rich one or a perfect lover, just a kind, caring, maybe funny and decent looking guy…

Christmas Cookie by Elizabeth Jewell: Everybody has their Christmas traditions — even vampires.

Happy Howlidays by Isabella Jordan: The moon is full this Christmas Eve and the two handsome hunks have some business with Sarah that they mean to finish.

Elves Gone Wild by Lacey Savage: The candy-cane wrapping paper on her sister’s gift reveals the sexiest naked man Grace has ever laid eyes on…

The Gift by Lia Connor: When Rob gets a job at a swanky Christmas celebration, he’s all about the money — that is, until he meets Shika.

Sideways Glance by Camille Anthony: A heated sideways glance from a handsome suntanned hunk sparks a desire in Cheryl to celebrate life.

Karmic Gifts by Kira Stone: Fate has a karmic gift in store for Pax… if she’s brave enough to accept it.

Snowman by Willa Okati: Josh is holding out hope for a miracle, that there will be a man perfect for him, one who loves him with all his heart.

You’ve got to be fucking kidding me.

Sarah Rushe stared through the heavy blitz of snowflakes on the other side of her windshield at the sign saying the road to her family’s cabin at Lake Nippissing was closed.

It’s only five miles away!

Sarah knew she shouldn’t have allowed her mother to talk her into coming up to Canada for Christmas. Being alone with her fat, worthless cat and her movie collection wasn’t a bad thing. She could be watching movies on her couch with some ice cream right now.

Oh, no. She’d bought into the whole fun family get-together idea, traveling hours by plane up to Buffalo, New York. The last three hours she’d spent in a rental car, driving through one of the worst snowstorms she’d ever seen. And now she finds out she can’t reach her intended destination?

Had any of her family made it then? If so, where were they?

For that matter, what the hell was she going to do now?

The left headlight of her rental car had been flickering for the last hour and as Sarah watched, it faded and stayed out this time.

Well, now she was screwed. She didn’t have enough light to see in the heavy snow and darkness. It was very late, the road to the cabin was closed, and it was pretty fricking cold.

No, wait. Had the headlight come back on? It was brighter now. Much brighter.

Crap. It wasn’t her headlight. Someone was coming up behind her.

Sarah had come to a stop in the road to read the closed road sign. She didn’t have long to worry that whoever was back there would plow into the back of her car. Before she could think about putting her car back into drive, a man got out of the vehicle behind her. Sarah rolled down the car’s iced up window and turned her head around to watch his large shadow approach her car.

The first thing she saw was the emblem on his heavy winter coat. Coolness! A park ranger. This guy could help her.

When he bent down so she could see his handsome face her enthusiasm faded. Devin Parke’s dark eyes locked with hers.

Well, this trip was getting better and better. Shit. Of all the damned people to run into. Sarah hadn’t seen Devin since that summer five years ago after she’d graduated from college…

“Hello, Sarah.” Even with the winter wind howling around him, his deep voice washed over her like a blast of heat. “Having some trouble?”

“Don’t be cute.” Sarah didn’t care for the way half his mouth curved smugly up. “I’m supposed to meet my family at the cabin.”

“That road is closed. This one will be soon and you can’t drive in these conditions with just one headlight in a front wheel drive.”

“I can if I follow you. Surely there’s somewhere I can stay to ride this thing out.”

Oh, she didn’t like the devilish turn his expression took. Not at all.

“There sure is but we’re leaving this car here. Even if you managed to get turned around you wouldn’t get far. I almost got stuck back there.”

Ride with him? After what had almost happened between them five years ago? Right. “Thanks but I’ll take my chances. I’m not going to just leave my car here.”

“Why? It’s not going anywhere.” Devin blew out an exhale. “I’m freezing my ass off out here. Shut off the car. I’ll get your bags.”

“Not going to give me a choice in this are you?” Sarah didn’t hide her sarcasm as she shut off the engine and began groping in the faint light from his headlights for her gloves and purse.

You don’t want him to give you a choice either. Who was she kidding? Sarah had wanted Devin Parke for many years now. He was the real reason her mother had gotten her off her ass and up to Canada — the chance she might see him again.

“Do you happen to remember what I told you the last time we were together, Sarah?”

How could she forget?

Yeah, she’d been drunk and she really had led him on that night. Sarah hadn’t meant to be a cock tease. She’d known Devin since she was a child and as she grew older, she came to realize that he was hot as hell. Devin was a man with a lot beneath the surface and that always made her a little nervous. It probably would have been the fuck of her life that night but she’d chickened out at the last minute.

And she’d always wondered since that night what sex with him would have been like.

“I told you that one day I’d have an opportunity to return the favor for that night.” Devin’s grin took on a distinctive predatory quality. “The moon is full. It’s Christmas Eve. Looks like a very Merry Christmas to me.”

He was fucking with her. Yeah, maybe she deserved that much. Yet he was on duty. He couldn’t be serious.

“Yeah, okay, Merry Christmas,” Sarah told him before grabbing her purse and climbing carefully out of her car.