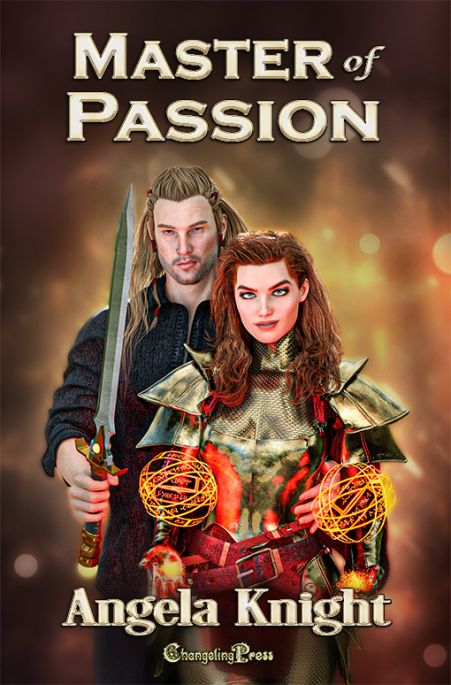 After combat news cameraman Adam Parker covers a Times Square attack by blue-skinned aliens that costs hundreds of lives, the invaders try to kidnap him. Fortunately, the attempt is foiled by a sword-swinging Knight of the Round Table and his witch partner. But when the vampire knight removes his helmet, Adam realizes Sir Baldulf is the father who abandoned him and his mother when he was ten.

Ulf swears he and Opal Cassidy are Adam’s only hope of survival. Otherwise the aliens will keep coming after him. Furious, Adam wants nothing to do with either of them — especially after Opal uses her magic to force him to run from the aliens instead of doing his job.

Opal has been ordered to seduce Adam and transform him into a vampire. Still grieving for a previous partner after more than a decade, the witch wants nothing to do with the handsome, cynical mortal. But orders are orders, so seduction it is.

Despite Adam’s bitterness and her grief, the two discover they have red-hot sexual chemistry. As the stakes climb and passion turns to love, Opal and Adam realize that if they don’t take a chance on each other, humanity will pay the price.

or pre-order for October 4th at retailers

Warm, muscled arms wrapped around her waist, and a big body slid against her from behind, snuggling close. The scent of him made Opal’s heart skip in sheer joy.

“Joaquin?” She rolled over to face him, eyes widening. It was him. “Joaquin!”

His wide, white grin flashed in the dim light as he rose to one elbow above her. “Hello, love.”

She caught his handsome face in her hands. Treasuring the warmth of his skin between her palms, she fell into the love shining in the rich, velvet dark of his eyes. With a needy gasp, she pulled him into a ravenous kiss. He felt so solid and strong as she pressed against him, all long, lean muscle. Her world had become as hollow as a drum without him, empty with yearning. “Oh God, I’ve missed you,” she moaned against his mouth. “I’m so sorry I failed…”

“Opal, no one could have done more.” His long fingers stroked her red curls. There was such sadness in his gaze, her chest hurt. “And I know how much you miss me. I’ve missed you, too. But darling, it’s time you let me go.” He lowered his head until his forehead touched hers. “Because, my love, I’m gone.” He began to fade from her arms like mist in the morning sun.

“No!” She screamed, clutching for him, but her hands raked through empty air.

Opal came awake crying. She sat up and swung her legs out of bed, burying her face in her hands. “I should have Truebonded with you when I had the chance,” she groaned to the man who’d been dead more than a decade.

Her cell phone vibrated on the oak nightstand with Alys Hawkewood’s ringtone. The atonal thumping notes made Opal long for the noxious metallic brrrrriiiing of the twentieth century. She scooped up her phone. “Hello, Alys,” she said, wiping her face with the back of her free hand. “What did you See this time?”

There was a pause. “Are you all right? You sound a little choked.”

Alys snorted. “‘Fresh hell’ is right. You need to meet us at the Great Hall. Arthur and Morgana want to brief you on an assignment I Saw.”

“Oh, that doesn’t sound good.” Not if the job was bad enough to trigger one of her friend’s visions.

Terrific. She forced a light tone. “Is it my turn to get captured by Fomos?” Which was what had happened to Alys the week before. From what she’d said, it had been ugly.

“No, someone else is in the bull’s-eye this time. And I’m afraid you’ll have your hands full keeping this one alive. He’s not going to want to cooperate.”

Merlin’s beard. “I’ll be right over.”

With a sigh, Opal reached for her magic and sent it rolling down her body. When the wave of sparks dispersed, she was dressed in black slacks, boots and an emerald silk blouse. Beat the hell out of whalebone and a bustle.

Boot heels clicking on polished red tile, Opal strode through the hacienda she’d built for Joaquin a hundred years before. She could have gated directly to the great hall, of course, but it was a nice night and she liked to walk whenever she could. Laziness was not a survival characteristic for Magekind agents.

The night was cool and pleasant, a quarter moon floating in the star-flecked Mageverse sky as she headed down the stone walkway to the cobblestone street. Avalon was at its most active at night when the vampires were out. The crowd was thick with agents kicking back between missions. Men and women strolled among fifteen centuries’ worth of architecture — everything from Roman villas to Frank Lloyd Wright. Stained-glass windows shone with rainbow light, giving Avalon a fairytale quality that prosaic mortal cities lacked.

Looking around at the laughing, chatting couples, Opal remembered the dream, and her heart ached. Eleven years ago she’d walked at Joaquin’s side like that, enjoying private jokes, arguing over mission strategies, anticipating a stolen hour or two in bed.

Now all she had was the job.

Ten minutes later, she reached the Great Hall that served as the Magekind’s headquarters. A massive gothic cathedral of a building, it towered against the night sky, huge stained-glass windows blazing into the night. Arched doors, each fifteen feet in height, swung silently wide at her approach, then closed behind her with a resonant thunk.

Time to find out just how bad this was going to be.

More from Angela at Changeling Press …