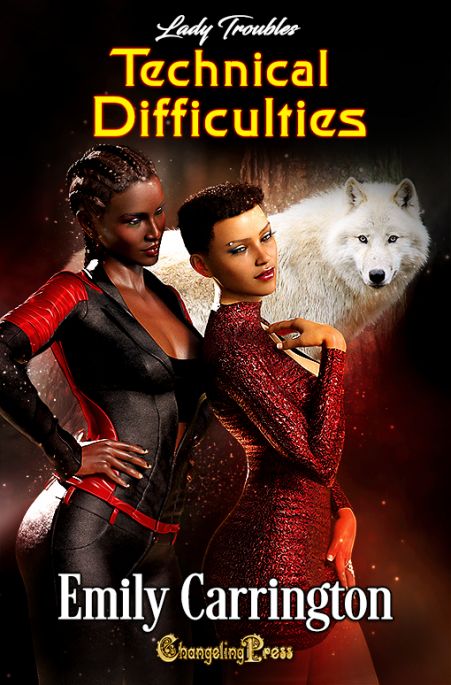 Sonya is straight. She’s also terrified of werewolves. So, when she’s forced to work with a male-to-female transgender wolf, the last thing she expects is to fall in love. But, hey, not so fast. Falling in love with a werewolf means living in her pack, where first-time sex equals mating. For life.

The dragon had been brutalized. As Medical Technician Sonya Johnson worked over the corpse, she couldn’t miss the signs. The poor dragon-in-human-guise was female. She’d given birth recently. Her distended stomach, open cervix, and other signs all bore witness to this.

Sonya whispered, “I think you were dead when most of these were inflicted.” She’d quickly discovered the cause of death: a crushed skull that had occurred while the dragon was in human form. Now all she wanted was to be done chronicling the postmortem atrocities and see to it that the poor soul had a decent burial.

Sonya smiled just a little. Thinking of any dragon as a “poor soul” was a little like calling a lion a kitty cat. Dragons, like werewolves, she thought with a shudder, were known for taking care of themselves. Both apex predators of the magical world, for slightly different reasons, they were treated with respect and almost obsessive politeness by other magical beings and the few humans unlucky enough to know about their existence.

“Humans like me.” Her smile was gone as she finished cataloging the last injury. Shaking her head, Sonya covered the body with a sheet and left the autopsy room. She locked the door before heading into her office.

All right, so it wasn’t technically “her” office any more than the autopsy room belonged to her. But she thought of both as her property because she spent more time in them than anyone else. That was thanks to the doctoral-level degree she was seeking from SearchLight Academy in Reptilian Magical Creatures: Treatment and Dissection. Unlike those who studied humans, magical creature experts were expected to have a wider knowledge base. The closest comparison Sonya could make was a general-practice physician. And even they weren’t responsible for both the living and the dead.

She had just finished her second year of postgraduate work. It was May. She had a blissful ten weeks off for the summer. Of course, she was still expected to work on her dissertation, so “rest” wasn’t in her vocabulary. But she wouldn’t be attending biweekly meetings with this or that professor to discuss her research. She might even have considered a week away from the city of Tampa, where she worked, and its lesser cousin, the city of St. Petersburg, where she lived. But she hadn’t scheduled any time off because she’d been too fixated on her dissertation to think beyond the next few days.

Someone knocked on the office door. Not closed completely and made of a light pressboard, the door opened a little more. Sonya caught sight of a skirt in a bold print and a tapered shoe. She called, “Come in.”

A woman stepped inside, saying simply “Sorry to disturb you” — and Sonya’s mind went sideways. Not because there was anything particularly wrong with the voice. It was just that she wasn’t used to hearing a slightly male-sounding voice coming out of a woman’s body.

Transgender. That’s what they call themselves. And, on the heels of that, I hate it when someone says “they” about my people so I will not start out by thinking of this person as a part of “they.” She’s dressed as a woman. I’ll call her “her.”

“Um,” she said uncomfortably, “you’re not. Please sit down.”

The transgender person — the woman, Sonya scolded herself — didn’t sit. Neither did she shut the door. “Thanks, but…” She looked briefly discomfited. “I’m Agent Brown. Maxine.”

That surely wasn’t the name you were born with. Oh, shut the fuck up! She doesn’t want you staring, and you will get over yourself.

Sonya realized Maxine was waiting for a response. Her small, delicate and frankly attractive nose was turning slightly red, just like Sonya’s did when she was embarrassed. “I’m sorry,” she said, rising and extending her hand. “I’m Sonya Johnson, one of the medical techs.”

The moment their hands touched, the hair on the back of Sonya’s neck stood up. She pulled back rather quickly. “Um… um…” She looked away from the hand she’d shaken and into eyes that were startling in their beauty. Honey-brown and shadowed by long, thick lashes, they took Sonya’s breath away. She forgot for a moment that her neck was prickling and smiled. “How may I help you?”

Maxine, who had taken a step forward to grip Sonya’s hand, retreated at least that far. “Agent Wellington wants to see you when it’s convenient.” She hesitated before adding, “He’s the head of Werewolf Watch.”

Sonya shivered. She couldn’t help herself. She hated werewolves. They were the craziest, most terrifying — Oh, get ahold of yourself. If you’re being called, you specifically… She met Maxine’s eyes. “You are looking for me, right? Because Jenny Davis could –”

“I’m sorry. He wants you personally.” She really did look empathetic. “If it helps, it will just be him, you, and me in a large conference room.”

Sonya’s particular skills were needed. She specialized in dragons and basilisks. What could she possibly do for a werewolf? Because Wellington had to be a werewolf. Unlike in the Department of Dragons, with which Sonya worked on a regular basis, Werewolf Watch was stuffed to capacity with, well, what else? Werewolves.

Shit. That probably means this woman is a werewolf. She looked directly into Maxine’s eyes, needing to know. “You’re a werewolf too?”

Maxine nodded. “Agent Wellington said to tell you he understands your circumstances, whatever those are, and that he wouldn’t call for you unless it was absolutely necessary. He also promises you can have a large conference room and it will only be the three of us; Agent Wellington, you, and me. We want to make you as comfortable as possible.”

Whatever those are. She doesn’t know. Sonya felt a little better. “Can he give me fifteen minutes to… to…” She glanced down at her report. To finish my work flashed across her mind, but it would take at least two hours to do that.

“I’ll tell him you’ll be up in thirty,” Maxine said gently.

Feeling a little more comforted, Sonya said, “Thank you. I’ll be up soon.”

Maxine left, closing the door behind her. Black, like me. But transgender and werewolf. The three modifiers to the name Agent Maxine Brown hit one right after the other. Sonya sank into her chair and covered her face with her hands. If she was going to have a prayer of working with werewolves…