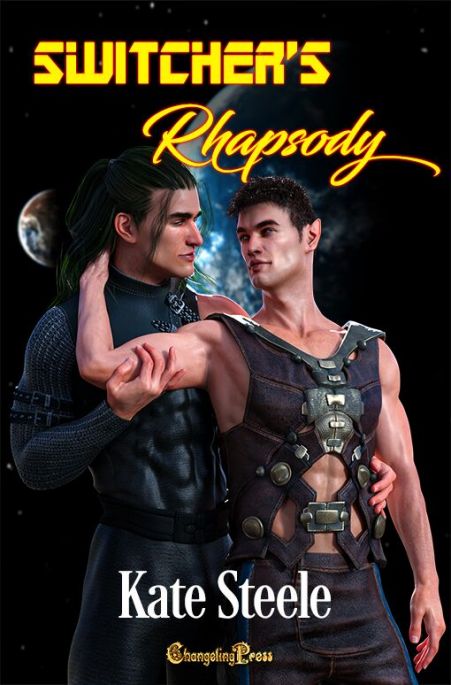 Tarl Mengs, navigator of the Starship Brizo, never expected his vacation would end with a near crash landing on a backwater planet like Peldar. Resigned to days of boredom while his shuttle is repaired, an unexpected meeting with a cute and sassy Adarian lands Mengs in a world of trouble. It seems Switcher has stolen a prize from a pack of poachers who will do anything to get it back.

Stranded and on the run, Mengs and Switcher face life threatening danger to save a species on the verge of extinction. And that’s the easy part. Who knew wrestling with a budding relationship would be even harder!

Mengs took another sip of his drink. The liquor was raw and burned its way down Mengs’ throat. Not exactly top-shelf stuff, it still managed to quench his thirst and complement the food, a local meat and root-vegetable dish he’d chosen for his evening meal. His expectations were again exceeded as the food turned out to be just as tasty as something Kyle, the Brizo’s chef and jack-of-all-trades, could cook up.

Upon emerging from Devenes’ front door earlier in the evening, Mengs had noted the increase of activity on the street. It seemed the town was nocturnal in nature. Storefronts down the way, including the game parlor, were lit up, and a lot more pedestrians were visible on the roadways.

The bar, Similfis, was filling up. The atmosphere was laid-back, the lighting mostly murky but brightened here and there by a few stray beams from overhead. The smell of food drifted in from the doorway to the kitchen located behind the bar. It was underscored by the tang of various liquors, the burn of some kind of organic substance being smoked and the subtle mix of natural musk and artificial fragrances emanating from the men and women who came to eat, drink and socialize.

Unhindered by the lack of bright light, Mengs kept careful watch on the action. So far it was peaceful, but when liquor and various beings mixed, trouble could be no further away than the use of one unfortunate word. Music played over a sometimes-scratchy sounding audio system. No live band here and no room for dancers. Similfis provided the basics. Food and drink, with the emphasis on drink. Anyone wanting other entertainment found it elsewhere.

As Mengs finished his meal and polished off his drink he noted one of the two bartenders headed in his direction. The man carried a bottle. The same one he’d poured Mengs’ drink from. When he reached the table, the man pulled out a chair. He tipped the bottle, refilled Mengs’ glass and set the bottle on the table.

Mengs took a sip of his newly poured drink. “Thanks.”

Mengs set his glass down. “Yep.”

Mengs studied the man. The native peoples of Peldar were humanoid, or as close to human as made no difference. Similfis appeared to be somewhere in his mid-forties, a strong-built man with a full head of salt-and-pepper hair. His eyes were brown, their expression shrewd. Mengs knew he was being sized up.

“Don’t say much, do you?” Similfis asked.

“Same here, so fair enough. I’d like to know why you came specifically to my place.”

“Recommendation from one of the Fratkin. Said it was a place where there’d be no trouble and I could leave in one piece.”

“Ah. Reputation is everything. I mean to keep mine.”

“I’ve no intention of interfering with that.”

“Happy to hear it. Enjoy your evening.”

A smile played on Mengs’ lips as he watched the man rise from his chair and walk away. He respected a being that took a hands-on approach to business. Similfis was a no-nonsense kinda guy who ran a tight ship. Reminded Mengs of his captain, Zen Ahbramez. Tough and dependable. Mengs leaned back in his chair and relaxed a bit more. Safe bet was nothing untoward would go down here this evening.

As Similfis rounded the end of the bar and took his place behind it, a slim figure ghosted in through the front entrance. Curiosity stirred and Mengs mused. Male? Female? The being kept mostly to the shadows with distance between itself and any other in the bar. Now and then, for only a second or two, it moved close to a patron whose attention was on their companions. He or she drifted in, then slipped away unnoticed.

At one point the being glided through a beam of light. Despite being somewhat hidden by a hood, Mengs caught a glimpse of a fine-boned face. His eyes widened. Male. Adarian. Though there were a few obvious off-worlders here, this was unexpected. What the hell was an Adarian doing on Peldar? Adar was across the galaxy and Adarians, unless they worked a job off-planet, were known for being somewhat insular. Mengs hadn’t noted any ships in orbit, and this young male was dressed like a native.

Though his curiosity was engaged, Mengs forced himself to relax and slump in his chair. If this male were anything like the Brizo’s second-in-command, Serk, he’d be ultra-sensitive to anyone paying him too much mind. Serk claimed his species began their evolution as predators in the jungles of Adar, and no matter how far they were now from their primitive roots, those predatory instincts had remained intact.

Sure enough, the Adarian melted into the shadows and halted his light-footed prowl. Mengs felt the weight of his regard for a brief moment before the Adarian turned away and left the way he came in. Quick, quiet and unremarked.

A slow smile curved Mengs’ lips. Pickpocket. He’d bet his last credit on it. The way the young man drifted from customer to customer, probably taking just a credit chip here and there, not enough to be missed — in, out and gone. Oh yeah. Mengs would bet anything the young Adarian would be counting his take later if he weren’t doing it already. And that thought stole Mengs’ amusement. Why was he here? Why so down-and-out he had to steal to get by?

It was a puzzle Mengs had no pieces he could use to solve. He found unsolvable puzzles annoying. If the opportunity presented itself he just might seek some answers.