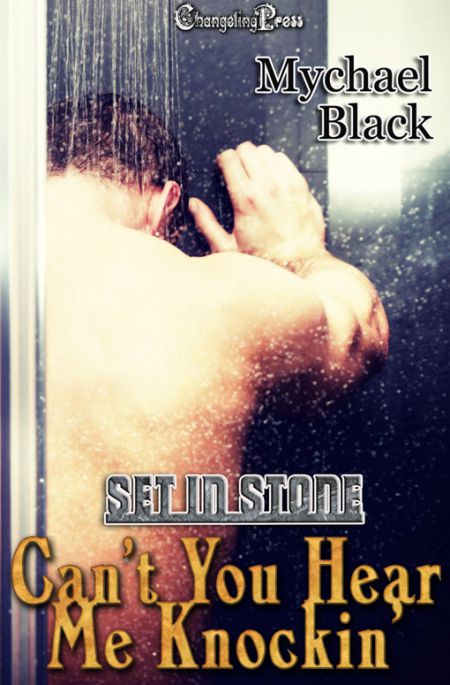 When Jacob’s eccentric mentor Malcolm dies, Jacob finds himself falling down the proverbial rabbit hole. Lucid dreams keep him questioning his own sanity. When he meets Christian, things only get stranger.

Is Christian real, or is Malcolm just trying to drive Jacob insane from beyond the grave?

Praise for Can’t You Hear Me Knocking (Set in Stone) “What a ride! If you like stories with lots of supernatural mystery, if a young man trying to decide what’s real and what’s a dream is your thing, and if you’re looking for a read with twists and turns that might just turn you completely around, then you might like this short story. ”

I left the group to their dinner, set the tray on the counter, and tugged out my order book before heading to the next table.

“Hello and welcome to Will’s Bar and Grill,” I stated. I opened up my book and finally looked at the lone diner.

Something about him seemed familiar, though I had no idea why. His light gray eyes drew me in, so much that it took considerable effort to get my brain to function again. I shook my head. “I’m sorry. Could you repeat that?”

“Any appetizers to start?”

“No, but I’d like to hear your opinion on the steaks.”

No one had asked me that in a long time. Hell, Malcolm had been the first to ever ask at all, five years before he…

No. No way was I heading down that road again.

“The New York Strip is good,” I said.

“But is it your personal favorite?” the man asked, leaning a little, his arms folded on the table in front of him.

He nodded. “The sirloin it is. Rare, please.”

“I’ll have your water out in a moment.”

I tucked my book back into my apron and left his table. I swore I felt his gaze follow me right into the kitchen. After inputting his order into the computer system for the kitchen, I fixed his water. Then I grabbed the steak sauce and ketchup and headed for his table. Instead of observing his surroundings or a cell phone like most people, he stared straight at me. It was unnerving, to say the least.

“Your dinner will be up soon,” I said as I set his water and the condiments down.

I froze and met his gaze. Something about the way he said my name made every hair stand on end. His tone held a touch of intimacy, of personal knowledge about me, that sent a chill through my body.

Thankfully, another table waved me over. I excused myself and returned to my duties. When his food came out, I asked another server to deliver it on the pretense that I was with a large group.

When he left, I nearly dropped the folder with the check. His bill had only been a hair over twenty bucks, but he’d tucked in a fifty and disappeared.

“So did you get a good tip from Mr. Creepy?” my friend, and fellow server, Ellen asked when I returned to the register to cash out his check.

I held up the fifty and the check.

“Holy shit! What did you do to get that?”

“Fuck if I know,” I said with a shrug. I finished and started my sidework. “Just glad he’s gone. He was weird.”

“Tell me about it,” Ellen replied before she left to do her own sidework.

I got mine done fairly quickly and told her goodnight before heading out. The cool night air helped me relax after a hectic shift. Hands tucked into my light jacket, I walked the two blocks to my apartment building. The city streets had emptied, for the most part, with only a few stragglers here and there. I ignored them and started up the outside steps to the second floor of my building. Another man came down from the landing, and I nearly bumped into him.

“That’s quite all right, Mr. Hewitt.”

I snapped my head up and stared into very familiar gray eyes. “How…”

He smiled. “I am not without my wiles.”

I had nowhere to go, and I didn’t trust this guy as far as I could throw him. I started backing down the steps. No way was I gonna go to my door so he could see which one it was.

He sighed. “Jacob… come now. Is this any way to treat an old friend?”

“Excuse me?” I blinked and stopped halfway down, still facing him. “I’ve never seen you before tonight!”

“On the contrary, you have,” he said. “But I will leave you be for now. We shall meet again.”

I stumbled out of the way as he passed me. He didn’t look back, and I watched until he rounded a corner nearly a block away. Then, only then, did I run up the steps to my door. The second I got the door unlocked, I practically jumped inside and locked it — including the deadbolt and chain.

“No fucking way,” I muttered, backing away.

A shiver snaked its way up my spine. But a deeper part of me couldn’t help but be intrigued. The guy was handsome. Long pitch black hair, a toned build, and those damned eyes…

More from Mychael at Changeling Press …