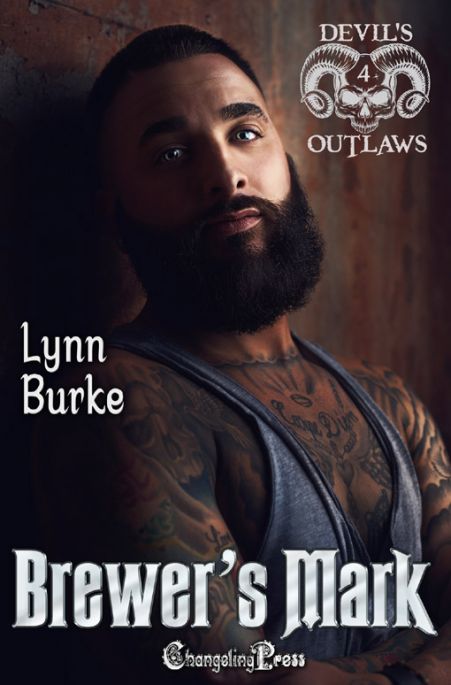 Reagan “Brewer” de Jager might look soft as a teddy bear, but his stint as a sniper in the SEALs hardened him into a lethal killer. The fact that his wife cheated on him while he was deployed makes him unable to trust. Cold hearted and empty, he sets his sights on his next mark — until one look into her eyes slays him.

Ex-CIA agent Nova Smego wasn’t nicknamed Black Widow by her superiors without reason. Underestimated for her petite form, she’s quick with her fists and lethal with a blade or a bullet. She joins a hitmen-for-hire team in the hopes of exacting revenge on the one who ruined her career. When the Outlaws eliminate her team to rescue one of their own, Nova is kept alive — and tied to her captor.

There’s a reason Brewer couldn’t end her, and while she plans her escape, she fears losing her heart to the chemistry sizzling between them. The Outlaws issue Brewer an ultimatum: pull the trigger, or find common ground to trust one another and avoid the Outlaws’ demand for her life.

or pre-order for August 16th at:

My heart pounded in my ears, but the heightened sound of gunshots from downstairs broke through the muffled thumps of my rushing blood. I yanked open the roof’s trap door and peered into the attic below, my night vision goggles making the cold evening seem like a spring morning teeming with vibrant green.

No life stirred below from what I could see — unlike the unexpected team of three men who had stormed our safe house, it was quiet as mice in a cupboard.
I slid down the ladder, the flesh wound on my arm aching. Adjusting my grip on my rifle, I pointed the barrel at the door and breathed slowly through parted lips.

Shots sounded again, but quieter as though they were in the basement where we kept the girl we’d been hired to hold. The senator who had dished out the cash for us to take care of his “little problem” had arrived a few moments earlier than the man who’d shot me. Another two must have slipped in the front door.

Teeth clenched against the pain in my arm, I wondered again why I hadn’t aimed for the face of the man who had shot at me after taking out our two northern sentries. The bastard had gotten one shot off — enough to make my arm mostly useless.

I eased the attic door open and peered into the farmhouse’s hallway. Light shone from the stairwell around the corner to my right, so I flipped my goggles off and let them slip to the carpeted floor.

Adrenaline coursed through me as I crept forward, and even though I hadn’t gotten off more than a single shot or moved more than twenty feet from my sentry position on the roof, my lungs fought for oxygen.

As an ex-CIA operative, I should have had more control over my nerves. As a battle-hardened bitch, I certainly shouldn’t have allowed my shot at the man slinking up on the house to fly wayward.

Lips pursed against disappointment in myself and the stinging pain, I approached the corner. A body whipped around in front of me, a meaty paw grasping my rifle’s barrel before I could swing it up.

I threw a punch to the kidney of the back lit man, putting all my strength behind me, but my fist merely earned a grunt.

The rifle flew from my grasp, and I shot out a combination punch, the third getting caught in the other damn paw of the huge man.

He dropped my gun and I blocked his grab for my injured arm, landing a half assed blow to rock hard abs that bounced my hand back at me.

I dipped as he reached for my free hand, trying like fuck to smash into his sternum with my injured arm.

The fucker snickered. “Got anything else, little girl?”

I growled and punched again, the beast’s body a solid wall of rock I had no chance of conquering.

He grabbed my wrist. “Enough.”

My world flipped, and I found myself face down on the floor, the carpet burning along my cheek as he wrenched my arms behind me. I kicked. Attempted to pull from his grasp — and he sat on my thighs, trapping them between his own. Fuck, he was big.

“Enough,” he snarled again, and zip ties tightened around my wrists. “Second floor clear,” he said, and I closed my eyes, finally stilling at the professionalism his words indicated about the team with him.

Heaving for breath I clenched my eyes shut.

They must have come for the woman locked in the basement. Men with earpieces, men who knew how to use their guns.

Another muffled shot sounded below us, and the man yanked me up, his hold loosening a bit on my good arm as I stood beside him. My back to the light, I peered up at my captor.

Hair, black as night, eyes blue as the summer’s sky…

My heart skipped and my adrenaline spiked again. Hot. No, gorgeous. Tall and solid, just how I used to like my men.

“Let’s go.” He yanked me down the stairs, his hold on my arm keeping me from tumbling down after him.

One of my team members lay sprawled at the bottom of the stairs, hazel eyes overtaken by dilated pupils that stared into whatever the fuck afterlife he’d believed in. I bit back my whimper, all thoughts of my hot-as-fuck captor erased from my mind.

“Sit.” He pointed at the wall beyond my friend’s feet, and I fought back tears and choking fear while doing as told, sliding down along the wall onto my ass while holding his stare.

Footsteps sounded from the kitchen. Another mountain of a man carried the woman from the basement, his hold gentle, his eyes tender while peering down at her. He lifted his gaze to my captor.

“Sniper from the roof,” my gorgeous attacker all but bit the words out.

“Why the fuck is she still alive?” the mountain asked while setting the woman onto her feet.

My captor turned his focus on the windows flanking the front door a few feet away. “Gunner’s here,” he muttered rather than answer his friend.

Headlights glinted across the entryway’s walls, illuminating the interior briefly, allowing me a quick study of the man looming beside me. Blood dripped from his arm from the bullet I’d put in him, splattering onto the hardwood floor, and I grimaced as my arm sent a shot of pain clear to my fingers, as though wanting to share in his.

My scowl deepened even though my insides warmed from the round, hard ass mere inches from my face. Perfect for sinking my teeth into. Perfect for grasping with my heels while he buried his length inside me. I craned my neck upward, taking in his broad shoulders, the muscular neck that disappeared into hair my fingers itched to touch.

More from Lynn at Changeling Press …

Lynn Burke is a full time mother, voracious gardener, and scribbler of hot romance stories. A country bumpkin turned Bay Stater, she enjoys her chowdah and Dunkin Donuts when not trying to escape the reality of city life.