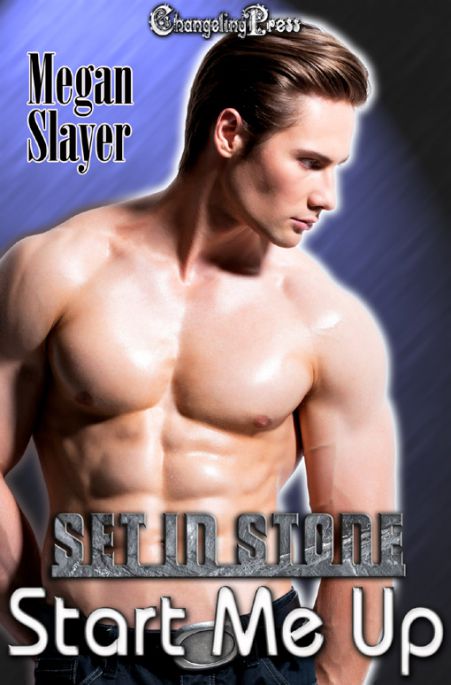 Chris Jordan swore when his partner died in January of 1979, he’d never find another lover. He didn’t want another one. But six months later, he still yearns for the man he loved.

Chris finds a letter from Steve telling him to visit Start Me Up, an electronics store. What could his partner have planned? What he finds at the store blows his mind, but will he be able to accept the desires of his partner — especially a seemingly robotic version of Steve?

Only time and patience will tell if these two lovers can find the passion they shared or if Steve’s death meant the end of everything.

PRAISE FOR START ME UP

“If you like stories with a touch of magic, if you think that two men who want to build a life together deserve a chance to do so, no matter what Fate may have decided, and if you’re looking for a slightly mysterious, entertaining, and very sweet read, then you will probably like this short story.”

“I love you, Stephen Kyle.” Chris Jordan rested his head on the wall of the shower stall. He wound his fingers around his dick and stroked himself. Every nerve ending tingled and his body buzzed. He cupped his balls in his other hand and widened his stance. His knees wobbled. The more he thrust into his fingers, the closer he got to coming apart. He needed this. Needed to be wanted and excited.

He rested his head against the tiles and groaned. Dear God, he wanted a dick in his ass. Wanted to come apart and be held. He squeezed his eyes shut and groaned. His throat ached.

Fucking hell. He gritted his teeth. “Steve,” he bit out. His strokes turned feral and he tensed. The muscles in his legs trembled. Heat overwhelmed him, despite the chilly water. The shiver started low in his body and overwhelmed him in a second as the climax hit.

He missed his lover — his partner, Steve.

Chris blinked back tears and reached up to turn off the water. He needed to get back to his life. But was it really living if his partner wasn’t there? He finally scrambled to his feet, then yanked the towel from the rack. Being alone sucked.

He missed Steve. They were supposed to be looking forward to the 1980s together and proving to the world that gay couples could grow old together. Not now. Not since Steve got the gay cancer and died. The epidemic had ripped through the gay community, seeming to strike at random at first and ravaging friends — with seemingly no cure. At least there hadn’t been a cure in time to save Steve.

Chris left the bathroom and dropped the towel on the floor. If his partner had been there, he would’ve reminded Chris to pick it up. “Hang it on the rack,” he’d say. “It won’t dry unless it’s hung up.”

He’d get there. He yanked a pair of underwear and running shorts from the dresser. Once he donned the clothing, he snatched the towel from the carpet. He draped the towel across the curtain rod. Not the rack, but who cared?

He grabbed a T-shirt from the laundry basket. Doing chores wasn’t as fun without Steve around. When his partner was still there, they’d turn the tasks into games. Whoever lost made love to the other. Inevitably they both won, even if they lost.

He shrugged the shirt over his head and stuck his arms through the sleeves, then sank onto the bed. According to his friend Dom, he had to get back into life. Sure. Easy for Dom to say — he spent his nights at the clubs and never went home alone. He also never stuck with the same guy or girl for more than a few days. Commitment freaked Dom out. Not Chris. He needed a partner. As soon as he met Steve, he knew — he’d found his partner.

He stared at the photos still stuck in the frame around the mirror. Him and Steve grinning in the sand on the beach at Maumee, standing in front of one of the roller coasters at the local amusement park, at the reception for Steve’s sister, Mimi. His heart ached. He and Steve were expected to come together, but to tell everyone they were just friends. Steve’s family never accepted them as a couple.

He’d memorized every detail of Steve’s face and knew his partner inside and out. The images comforted him. He crossed the room and touched the frame around the photo of him and Steve in their suits. He noticed the envelope behind the picture and winced. He’d been given the envelope during the reading of Steve’s will. The only reason he’d even been invited to the reading had been because their mutual friend, Lew, had written the will and insisted on giving Chris the letter or whatever had been contained in the envelope.

Should he finally crack the seal? Six months since Steve’s death hadn’t made the hurt go away or even lessen a bit. He touched the corner of the envelope. Fear hit him hard. He’d put the thing away and tried to forget about it, but every time he looked at the photos, his curiosity piqued. Would there be something bad in the letter? Something good? He’d never know until he opened it.

He left the bedroom in favor of the kitchen. If he was going to finally open the envelope, he needed wine. Beer. Whatever he had in the fridge containing alcohol. Hell, he’d take whiskey right about now and he wasn’t into the harder stuff.

He poured dark red liquid into a plastic tumbler, then climbed onto the counter to sit. He kept the glass beside him, but didn’t drink.

His heart hammered and he flexed his fingers a couple of times before he picked up the envelope.

“Here goes nothin’,” he murmured. He tore open the back and pressed his lips together. A piece of paper slipped free and fluttered onto his lap…

Megan can be found at https://www.facebook.com/theauthormeganslayer.