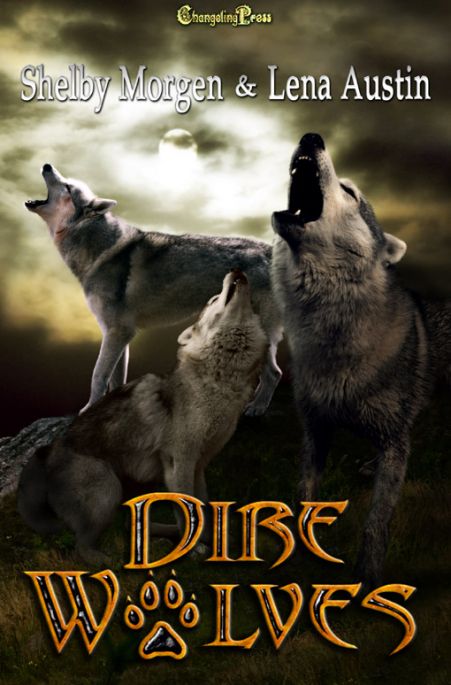 Blind Spot by Cynthia Sax: Years ago, Pavel lost his eye, three members of his pack and his position as alpha. Can Maggy help him find a reason to live again?

Whiteout by Shelby Morgen: Zan gives John a reason to want to live as a man again. But before he can make that kind of promise, he’s got unfinished business to take care of.

Silence by Lena Austin: Noel Miller, a vampire with a few scars of his own, wants to be more than Cam’s sign language interpreter. If only the werewolf will let him into his life — and heart.

White Heat by Shelby Morgen: Heather Grant’s got far too much experience working with stubborn males. She figures it would serve both Alphas right if their pride blows their cover. But someone’s got to salvage the mission.

All rights reserved.
Copyright ©2019
Excerpt from Silence by Lena Austin

“Danse Macabre” was a lousy choice for a ring tone, but Detective Cameron Douglas always thought about it when he had the least amount of time to change the ring to something else. The tune was the last he’d ever hear. Cam didn’t know that sad fact, or he’d have changed the ring sooner.

Cam snatched the phone out of his pocket and flipped it open as soon as he saw it was his boss, Lt. Kraynak. “Hey, Mark! You caught me just leaving the mayor’s office.”

“Yeah?” Mark’s voice always sounded nervous, but at that moment, he sounded as squeaky as a girl. Cam always wondered if Mark was as closet gay as Cam himself. “How’d it go?”

Cam sighed. The investigation into the death of the mayor’s secretary, Margaret Lund, was supposed to be kept very quiet and low-key. “We got the blood from her apartment at the lab, looking for DNA. They seem to be consistent with the defensive marks found on her body despite floating around in the St. John’s River for a while. I’ve got a few good leads.” He had to be vague. Cam couldn’t exactly tell his boss he was a werewolf and he’d caught an odd, masculine scent in Margaret’s apartment. He knew any sort of masculine odor didn’t belong in that apartment because Margaret and his mother had been lovers for over twenty years. Not exactly what you want the whole world to know. Mom had been in the closet all her life, and he wasn’t about to out her when she was mourning “Aunt Maggie’s” death. Dad would turn over in his grave, the day care she’d run for fifteen years would close, and her life would be in ruins. What she and Maggie had enjoyed just wasn’t ever going to be public, and that wasn’t admissible evidence anyway.

He could see it now. Him, on the witness stand. “Yes, Your Honor. I’m a werewolf you see, and I sniffed this odor…” He winced, even to himself.

“I don’t like it, Cam. You shouldn’t be on this case. Ms. Lund was your mother’s best friend. You could be called prejudiced in court.” Mark popped another gumball in his mouth. Cam heard it rattle against his teeth before it crackled as he chewed it into oblivion. Mark’d been trying to quit smoking again, and kept a gumball bank on his desk.

“I don’t like it, either, Mark. Where His Honor got the idea I’d be the only detective who could do the job is beyond me.” Cam was in sight of his car at last. The covered parking garage across the street from City Hall was a piece of shit like all the rest of downtown. Half the security cameras didn’t work at the best of times, and the roof leaked whenever it rained. So where was he parked? On the roof. In the rain. Of course. So he was wet. It was Florida. Not like he would melt. He was a werewolf, not a witch, and this wasn’t Hollyweird.

The beep in his ear made him jump, and the caller ID told him it was Mom. “Hey, I’m at my car. Hang on a sec.” Cam flipped over to his mother’s call and sat down on a bench about fifty feet from his car, in the shelter covering the elevator. “Hi, Mom.” He frowned and noticed the hood of his car was slightly ajar. That was odd. He distinctly remembered changing the oil the previous Sunday and slamming the hood closed because he hated working in the hot sun.

Waking up wasn’t like someone flipped on a light switch. It was more like a lazy Sunday morning when you didn’t have to be anywhere or do anything in particular, so you could roll over and laze in bed. That is, until your bladder or some other bodily need woke you up.

What woke him up was pain. Cam had the worst headache ever, even beyond hangovers and mild concussions from playing rugby. Cam felt like he’d been run over by a semi, too, with a backache from lying in one position too long on top of assorted injuries. Worst of all was the ringing in his ears. Tinnitus, he guessed. Not bad, since Cam had to assume he’d survived that explosion. Hell, he counted himself lucky when he opened his eyes and saw his left leg in bandages, not a cast. If a headache, a bum leg, and a case of tinnitus were all he had to suffer through, Cam was happy.

A nurse peeked in. She saw Cam was awake and smiled at him. Her lips moved, but he couldn’t hear her over the ringing in his ears. She frowned when Cam told her she’d have to speak up, and would she bring him something for the headache and tinnitus? She turned around and walked out without another word. She was back with something she shot into his IV. Whatever it was put him out like a light. Pain, tinnitus, and consciousness all went away at once.

When next Cam could put two words together in a coherent sentence, the clock on the wall and the darkness out the window gave him a clue it was 7:30 PM, not AM. He’d slept away the whole day. Great. Now his ears were sore.

A young man in a lab coat read a book in the corner chair, even though the only light source was the fluorescent above the head of Cam’s bed. The guy’s eyesight must have been superlative. He looked up slowly, and Cam was completely arrested — pardon the pun — by his eyes. They were big, blue and so world-weary Cam wanted to — maybe buy the kid a cup of coffee and give him a sympathetic ear. Then the newcomer smiled, and the world was all sunshine and cheer. The young man tapped on the keyboard of his laptop without taking his gaze off Cam’s face.

Cam moved restlessly under that intense blue gaze that did not in the least match with the smile. Cam opened his mouth to speak, but stopped when the screen on a laptop left on his lap table brightened. He frowned and studied the screen. “Can you read this?” Surprised, Cam nodded without thinking.

The blue-eyed man smiled and nodded. “Good. How’s your tinnitus?” lit up on the screen in a standard IM chat feature of a common website.

“Um… should I answer aloud?” Cam felt suddenly adrift in a strange sea, unsure of himself for the first time since college. Still, he did an internal check, and the buzzing still filled his ears like a thousand crickets on speed. “Yep, still have the crickets.” The realization hit him. “The explosion caused this tinnitus, didn’t it?”

“Yes, Mr. Douglas. Please speak more softly.” The IM kept up easily, and the young man’s hands flew silently but rapidly over the tiny keyboard. Damn, this guy was good.

Oops. Cam wasn’t stupid. He knew that those with hearing issues often spoke too loudly, trying to over-compensate for their loss. He modified his volume. “Um. Sorry.” He clung to the thin thread of hope that the tinnitus was causing his hearing loss, but he knew a bunch of cops who’d neglected ear protection at the shooting range once too often. Tinnitus could be permanent, or worse, the symptom of something much, much worse.

The IM lit up with several lines in rapid succession. “My name is Noel Miller, and I am your ENT therapist.” Now the cheer was gone, and the face serious.

Cam’s heart hammered, and he swallowed to help his suddenly dry mouth. Fear, ice-cold and cruel, raced up his spine. Part of him was grateful he still had painkillers in his system. Deep inside himself, a little kid threw a major temper tantrum, even if he held himself rigidly under control. “I’m deaf, aren’t I?”

More from Lena at Changeling Press…

Hey, why waste these stories on kids who won’t listen anyway? Writing them down is a nice way to spend her retirement. What? You expected an ex-BDSM Mistress to take up crocheting or something? See all her books at http://www.LenaAustin.com.

More from Cynthia at Changeling Press…

Some girls dreamed of knights in shining armor. Cynthia Sax dreamed of dragons, magnificent flying dragons. Being a bloodthirsty little thing, Cynthia usually dreamed of these dragons eating the damsels in distress. Now, she dreams of them doing… ahhh… more pleasurable things.

Cynthia is happily married. Although her hubby has not yet shown any shapeshifting abilities, he does buy her medieval princess costumes to wear around the house. Cynthia’s rather traditional mother-in-law now always calls before visiting. You can learn more about Cynthia by visiting her website at www.CynthiaSax.com, her blog at http://tasteofcyn.com, or email her directly at Cynthia@CynthiaSax.com.

More from Shelby at Changeling Press…