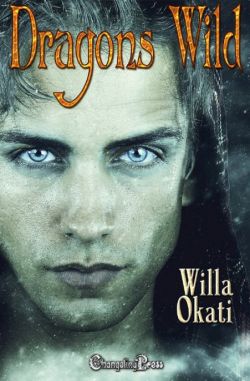 Georgina’s Dragon: Gina may be a superhero, but all she really wants is to settle down to a normal life. And please, no spandex or comic book aliases. Too bad fate’s got other plans for her. Flaming hot plans. Like, an actual dragon, loose in her city. Gina’s no damsel in distress, but she knows she needs help. And the help she finds is hotter than the dragon — the sorcerer Dakarai and a zoologist named Randall. As if saving the city from a dragon wasn’t enough, now she’s got two hot men falling in love with her — and each other. She’s still drawing the line at spandex.

Wild Hunt: Delaney, a Celtic fusion musician, has spent his life creating love songs and erotic ballads with a driving rock beat. Then he meets Robbie and finds himself caught up in the whirlwind of a Wild Hunt. Feral, enticing Robbie captures Delaney’s heart, kindles his curiosity, burns him alive with passion, and draws him unwillingly into danger. The bindings and piercings that decorate Robbie’s skin are meant to keep him from betraying the secret that could save both their lives and win their freedom. Delaney’s determined to keep his man, and he’ll do what it takes to save him — even if it means sacrificing everything else.

get it in paperback

Delaney’s guitar beat a thump-thump-thump tattoo on his back as he toiled uphill, toward the summit where he could look down and see the cellar. One of the oldest venue stickers, crumbled away in places, tickled his nape. He shrugged irritably and hitched his case higher on his shoulder.

“I have some aloe,” Black-Eyed Susan said, her sudden presence making Delaney jump. She had quite the way of sneaking up on a guy, didn’t she? “Well. I know where an aloe plant is. They won’t notice if I break off a stem. Probably.”

“What?” Puzzled, Delaney waited for Hugh to join them and reclaim his lady. Not that he thought Black-Eyed Susan would go along with anything she hadn’t chosen for herself. She reminded him of a maple sapling, small and thin, but with roots that stretched as deep as a thousand-year-old oak.

The flash of an eye through dark gold hair obscuring a man’s face. A double row of brass rings laced through with black suede, a false corset on a man’s firm back. Bared teeth, white and sharp.

“Are you all right?” Black-Eyed Susan stood on tiptoe to peer at him.

“Yes.” Delaney tightened a fist around his guitar case’s strap. He tried a fake smile. “I had too much to drink and went a little crazy. It won’t happen again. I’m fine.”

“You don’t look it. Maybe going back to the cellar to practice isn’t such a good idea. I mean, memories and all?”

Delaney thought, for an uncharitable second, that he liked Black-Eyed Susan better when she was drunk, and knew he preferred her when she had eyes only for Hugh. “There’s nowhere else to practice,” he pointed out. True enough; all the good grottos and groves and niches had already been claimed by the time he and his had stumbled ragtag out into the morning. “Don’t worry about me.”

“What he said.” Hugh finally reached them. He playfully batted Black-Eyed Susan’s shoulders with the smooth flat of his bodhran. “C’mon, lass. You promised to dance as long as my wrist action holds out.”

Tam, forever Delaney’s darker shadow walking silently by his side, covered her mouth but wasn’t able to hide her smirk at the innuendo.

“That’s good,” Delaney said, the joke a welcome relief. It felt good to laugh. “You don’t even have to think about them anymore, do you?”

“Funny.” Not in the least bit insulted, Hugh rumpled Delaney’s hair and then Tam’s, bound so tightly to her head as to be immovable as a skullcap of dark glass. “We’re going to check around later. See if there was anything besides whiskey in the jar last night.”

“I know, I know. But you’re too out of it for me to be comfortable, so humor me, okay?”

Delaney couldn’t argue with that, not without ingratitude fit to shame a thief. “I keep remembering things. Not what happened. I don’t think.” He chafed his forearms, a little chilly despite the heat of the summer sun rising toward noon height. “More like dreams. Maybe. Crazy stuff. They’re throwing me off my game.”

He walked ahead of the trio before they could press him on that and stopped at the top of the hill. Below him, the cellar pit opened like a mouth in the earth, the rough-hewn stones its teeth and the heavy-hanging pall of last night’s smoke its breath. No one had been back to clean up. The ashes and embers of the fire made an ugly black smear in the middle, with cigarette butts and detritus littered about like random snow.

“Real nice.” Hugh caught up and pulled a face at the mess.

Delaney tried to lighten the faltering mood. “At least I’m not the only one who got too buzzed to behave.” He knew it was a mistake the moment he’d said the words. Words had power; any musician knew that. “Hugh.”

Hugh rubbed his jaw. “It’s in the past. Leave it there. We’ve got the place all to ourselves, anyway. That’s something.”

Get more books from Willa at Changeling Press…