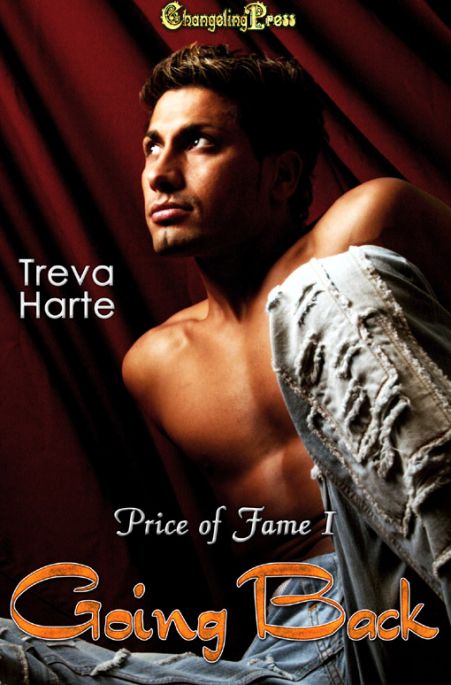 Gene Price, former teenage star, has been living the simple life. He’s cut himself off from anyone who knows about him and his former bad reputation. Out of the blue he begins to get death threats. He doesn’t want any part of his past nowadays, but the only one he trusts to find out what’s going on and protect him is Leo, his former bodyguard — the one he’d slept with before he fired him.

Will Leo be wiling to protect Gene? And could he ever be interested in the changed man Gene’s become?

“Been a long time, Leo.” The extra decade looked good on him. He had more muscle — more presence. He wore his suit easily, not like the nervous minder Lane had hired back in the day. There was just enough gray at the temples to make him look distinguished. He’d grown up looking fine.

I found myself rubbing the surgery scar underneath my hair. I thought I’d broken myself of that nervous habit. But I didn’t like the way he was assessing me. Yeah, we both knew the extra decade hadn’t done as much for me. I sure as hell wasn’t the pretty boy people had gone insane for when I was in my teens and early twenties. I could see in his eyes that he wasn’t impressed. It was no more than I expected, and better than the outright disappointment I sometimes got. But it stung a little.

He wanted to be here even less than I’d wanted to ask for him. My stomach clenched again. What else could I expect? I couldn’t think of anything I’d done then to make him want to see me now. It was too bad that I’d liked him back when I didn’t like anyone much. Since I remembered the way I worked during my glory days, it meant I’d been more of a dick to him than I normally was. And I was a pretty big dick to people.

“I probably should apologize for that long ago time.” My memory was a little spotty, but I remembered a few incidents with him hustling me out of trouble while I did my best to stay back in it. And of course the reason he’d quit.

He looked at me steadily and didn’t say anything.

So I kept talking. “I’m still kind of an asshole, but I like to think my time away from all the glitter has improved my behavior some. People don’t get nearly as pissed off at me now.”

“Death threats usually mean someone is pissed off,” he pointed out.

I took a deep breath. “Well. I suppose there’s that. I was hoping you would tell me not to worry so much about it.”

“Afraid that’s not in my best interest. You hired me and hauled me out here on the tail end of a blizzard because you’ve been worried, and now I’m being paid to worry about it. But whatever. I don’t care about how you feel about these notes as long as you realize I’m in charge of keeping you safe. I’ll do whatever seems necessary.”

“You aren’t much in favor of the customer is always right, are you?” I tried to smile. It wasn’t his words so much as his attitude that stung. I probably had picked the wrong guy for this job.

Strange how disappointing that thought was.

“May I see the originals?” He held out his hand as if I carried the notes next to my heart or something.

I stood up and fumbled in my desk drawer. I didn’t usually use my desk drawers for anything but dumping unwanted mail. I suppose these qualified.

Leo put on reading glasses and set his mouth in an even straighter, grimmer line if that was possible. He read the two of them three times before he looked up.

“They don’t mention why you deserve to die,” he said. “As you say, you’ve been out of the public eye for a decade at least. What have you stirred up recently?”

I shrugged. “Nothing. Seriously. I keep pretty much to routine here. Pay my bills, say hello as needed to the neighbors, feed the dog.”

Leo glanced over at Ozzy, who half-opened his eyes and thumped his tail agreeably. Everyone was Ozzy’s friend. It could be annoying.

I frowned. “I have something in mind, but I haven’t done it yet.”

Leo didn’t say anything. He was good at that.

“Really, the only thing I’ve done recently is start to think about investing in some property near here. There’s talk about rebuilding the only hotel and restaurant within thirty miles. It went out of business a few years ago when the owners retired and sold to some New Yorker who promptly went bankrupt in the middle of trying to make the place look like New York. It could bring in some jobs and money, but I wouldn’t want it done stupidly with some new development company that goes bust. I only got as far as asking Lane to look into pulling out some principal from my savings if I thought it might pan out. But people around here want the hotel back. No one local would be threatening me. Actually, if they did, they’d probably just come after me with a shotgun. There’s plenty of those around here.”

“Jesus. I live by myself and I keep things quiet. Haven’t done television or a movie in years, and paparazzi aren’t likely to track me out here to watch me buy my groceries or split firewood.” My head was starting to hurt. I took a deep breath. “I’m pretty inoffensive nowadays.”

The old landline phone with the loud ring made me jump. I didn’t get a lot of calls.

“Hello?” I relaxed. My most constant caller was Lane and even she kept it to once or twice a month usually. This must be one of those calls.

Yeah, it was her.

“You’re about to have a visitor.” She sounded a little tense.

“Leo is already here. No problem.” Or not much of one. I was already a little twitchy from his presence, but I’d get over it once I got used to someone around.

“That clears that up.”

“Don’t take up being a smart-ass again. You don’t have time for it.”

“All right, all right. What the hell is going on?”

“You’re about to have family call on you.”

“What the hell?” I hadn’t spoken to my parents since I turned eighteen and took control of my own money — and sued the hell out of them for taking mine before that. “Head them off!”

“Can’t. Social workers are on your trail.” That’s when I heard the note of real concern. I was in trouble?

“What? I’m way too old for a child care agency and not old enough for senior services.” A little too late, I realized I should have asked Leo to step out of the room.

Get more from Treva at Changeling Press…