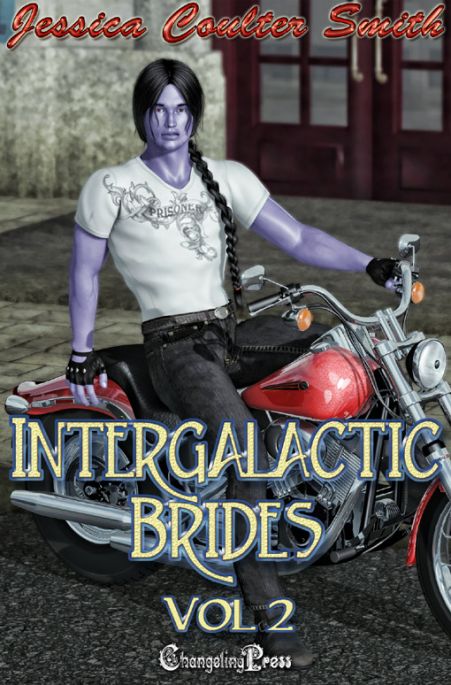 Three aliens intent on finding their mates. Three human women willing to risk everything for a chance at happiness…

Charlotte and the Alien Ambassador: When her father demands she take her sister’s place in a bride exchange on another world, Charlotte decides to embrace her future. She knows it’s her last chance to find happiness, and she’ll do anything to grab it with both hands. The ethereal woman who steps off the shuttle holds Borgoz spellbound. She’s everything he’s ever wanted, and the one thing he can never have.

Hazel and the Alien Biker: Kicked off his home world after losing his mate, Reyvor has made a place for himself on Earth, spending his nights cruising the streets on his Harley. But a commotion outside his motel room just may turn out to be his saving grace. Hazel is hesitant to trust anyone again, but Reyvor is determined to make her his. What’s an alien to do when all he wants is a loving family to call his own? He’ll break down her defenses one by one, until she melts against him and begs for his kiss. Can he claim the feisty Hazel and her three little girls without completely losing his heart?

Jacie and the Alien Bodyguard: Stupid. Careless. Jacie has called herself ten times a fool. Now she’s pregnant and alone. When a tall, sexy hunk of alien male meets her at the shuttle station on his world, Jacie feels the stirrings of desire — even though that’s what got her into this mess in the first place. But there’s something about Barimere that’s different, and she doesn’t mean the scars on his face.

An alien warrior intent on fighting his attraction. A human female determined to bring him to his knees. What could possibly go wrong?

“Are you Charlotte Mayweather?” the male asked.

She nodded. “Why can I understand you and not anyone else?”

“I, along with quite a few other males on this planet, have learned your Earth English. However, to make sure you can understand everyone around you, I’m going to implant you with a translator. I’ll also implant you with a sensor that will allow you to make purchases on our world. When you select a mate, he will pay for whatever you buy between now and then. Once your mating is approved, you’ll be added to his accounts everywhere in Terran Prime.”

“Thank you for explaining how everything works. I’ve been a little lost.”

He frowned. “May I ask a personal question?”

“Your voice is different from anyone else I’ve encountered from Earth. Are you from a special region?”

“Understood. Perhaps, after you’ve found a mate, they will permit me to run some tests and see if we can restore your hearing.”

“I was born deaf. My mother had preeclampsia when she was pregnant with me, and I was born early. Some of the bones inside my ear didn’t form correctly. A doctor tried to explain it to me once, but I didn’t understand the terms he used.”

The doctor nodded. “Well, we’ll take care of those implants today and if you decide you wish me to run tests later, then that’s what we’ll do.”

She meekly followed the doctor into a back room and stretched out on the table at his direction. He explained the procedure to her before giving her some gas to put her to sleep. When next she woke, her wrist and the back of her ear hurt a little, but otherwise she couldn’t tell she’d had anything done.

Charlotte found the other male pacing in the lobby.

“Can you understand me now?” he asked.

“I have a translator, so I understood everything you told the doctor. You’re not Charity Mayweather, are you?”

“Charity is my younger sister.”

The Terran’s face flushed with anger. “Your father lied to me. He said he was sending Charity here to find a husband, not her deaf older sister.”

She felt shame burn through her as she realized she was about to be cast aside again. Charlotte knew she should be accustomed to it by now but it still hurt, knowing she wasn’t good enough for yet one more man.

“If you send me back to Earth, I’ll be homeless,” she said. “My father said if I didn’t come here and find a husband, I would be thrown out of the house and all my accounts would be closed.”

The Terran muttered something, raked a hand through his waist-length hair, and then faced her with his hands on his hips. “I’m Chief Councilor Borgoz and you’ll be staying in my home. You may not be the sister I was expecting, but I’m not about to leave you stranded here. Especially with your condition.”

The harshness of his face relaxed into an apologetic look. “I didn’t mean to imply that you were stupid, but there are many dangers on a new world for anyone, much less someone who can’t hear. I didn’t mean to make you feel unwanted or as if you were a burden.”

“It wouldn’t be the first time in my life I’ve felt that way.”

His gaze narrowed. “Your father made you feel unwanted?”

“And my sister. Be thankful she didn’t come in my place. She’s a spoiled, selfish brat who always has to get her way or she screams and throws things.” It felt good to be honest about her sister without fear of being punished. Everyone always treated Charity as if she was a princess, and Charlotte was tired of it.

“Right. Well, let’s get you settled. I’m sure you’ll want more things than what you brought with you. Once you’ve had a chance to put your belongings away, I’ll take you shopping for anything you had to leave behind.”

“I don’t need much. As long as you have something to wash with, I’ll be fine. I have enough clothes to last a week before I’ll have to do laundry.”

“A Terran week is eleven days. You’ll need more clothes. Things are different here on Terran. We don’t have machines in our homes to launder our clothes, and the shop in town that handles it is usually busy. You’ll want as many outfits as possible.”

He crooked his elbow and she curled her hand around it, watching as he hefted her bag as easily if it contained no more than feathers.

Charlotte tried to take in the scenery as they walked through Terran Prime. Borgoz explained that, while he had a vehicle to maneuver through the city, he thought she might like the walk to stretch her legs after such a long shuttle ride.

When they reached his home, her jaw dropped as she stared at the massive structure. She’d lived in a mansion all her life, but Borgoz’s home surpassed that of her father’s by a fourth floor and probably another twenty feet in width. She tried not to stumble over her feet as he led her up the stairs and into his home. Charlotte looked everywhere, not wanting to miss a thing.

Borgoz handed her bag to another male, and they followed him up the stairs to her room. It was twice the size of her bedroom at home with doors that opened onto a balcony overlooking a garden. It was gorgeous, and for the first time in her life she felt lucky. She was glad her father had sent her here, and had hope that her future would be bright and wonderful.

She turned from the fantastic view to find Borgoz studying her. Charlotte couldn’t guess his age. There were no wrinkles on his face, but the silver in his hair told her he was probably forty at the least. But then, she didn’t know how Terrans aged. For all she knew, he was pushing seventy like the vile old man her father had tried to force her to marry.

Borgoz was a handsome man. His purple eyes were dark like a pansy and quite beautiful. Those eyes were taking her in, and she wondered if he found her lacking like everyone else in her life. If she’d known she was coming to a palace, she may have dressed a little nicer for her trip. She tugged on the hem of her tank and wondered if she should change clothes before going shopping with him. He was being kind enough to give her a place to stay, the least she could do was not embarrass him in front of his people.

“I’ll come back in thirty of your Earth minutes to see if you’ve finished unpacking. If you’re hungry, we can stop for a bite to eat while we’re out and then go shopping. Don’t hesitate to ask for anything you need. If you can’t find me, Helio will help you,” he said, indicating the other male.

Borgoz gave her a regal nod and then he exited with his servant.

Left alone, she quickly unpacked and changed into a pretty sundress so she would be appropriately attired for an outing with someone so important, then she spent the rest of her time admiring the view. Charlotte hoped she’d get a chance to walk through that garden and admire the petals of the vibrant flowers close up. This world was amazing and full of new and wonderful things. She couldn’t wait to explore as much of it as she was allowed.