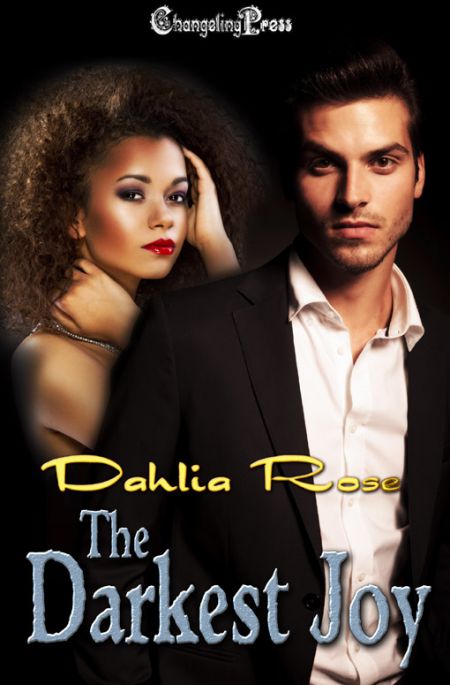 For Bliss, Caim would tear hell apart. To bring Caim to the light,
Bliss would sacrifice everything.

For a crime committed in the halls of heaven, Caim fell from grace to become one of the fallen. His punishment is to serve in the pits of the underworld as collector of the devil’s debts.

A thousand years in the servitude of demons is more than Caim can bear. Now he has a chance to be free and to find peace. He has found what he seeks most in the eyes and arms of Bliss Tadeo, a phlebotomist in a small town called Merry, North Carolina. With her eyes and her heart she has soothed the beast within Caim and given him a chance for redemption — if they can survive his ultimate escape from hell…

Publisher’s Note: The Darkest Joy (Dark Love 1) is an edited version of a previously published work by the same name.

So beautiful. He watched her smile as she strapped a piece of rubber around a patient’s bicep. The smile was brilliant, kindly and full of encouragement as she slipped a hollow needle into the vein. She murmured reassuring words to ease her patient’s fears. The lifeblood of the man began to fill the tube. Even from far away he could hear her every word. She talked about the weather, and asked about children, a conversation to take a person’s mind off what was happening and help them into a happy place. Finally she was done and then she flashed that glorious smile once more. Perfection.

No one could see him as he walked down the corridor behind her as he had done for weeks now. He watched her work and at night he sat outside her window and watched her sleep. Her beauty took his immortal breath away and the normalcy of her life gave him hope for himself. After thousands of years one mistake made him who he was now. Only redemption could free him from his immortal torment, his dungeon, his curse. He sat next to her, invisible, as she wrote up charts at her small desk, in her space, her sanctuary where she worked. He inhaled the scent of hair like it was a fine wine. The dark tresses smelled like honeysuckle and vanilla spice. He wanted to run his finger down the creamy chocolate shoulder that was exposed when she took off her lab coat. When she turned, her nose was just a breath away from his, yet she did not know it. Her breath caressed his lips. It had the scent of the strawberry soft chews she liked to snack on at her desk. He stared into eyes that were like liquid chocolate. Her lips were full and she wore gloss that had a slight color of gold. Pictures of family and friends were all around her, trinkets of her human life that she treasured. One picture she favored the most and she looked at it every day. She caressed the silver frame with the word grandmother in raised letters. He heard her speak of the woman frequently, saw them go out to lunch, and watched as she hugged her with affection and love. He longed for an emotional connection, a bond with another person that couldn’t be broken, he craved…

The call jarred him from his place next to her. It was like a sledgehammer to his head. He hated when this time came around, he hated being away from her. But if he did not go to his duties the repercussion would be great and by the time his punishment was over a hundred years would have passed and she would be long gone. A frown darkened his face as he moved away from her. He promised to return to no one but himself. The next time he would reveal himself to her slowly, letting her know the man before she knew the secret. Next time. Her name was Bliss. Bliss… Bliss… Bliss, he repeated the name over and over in his head. She would be his Bliss and his salvation.

He felt it in the fiber of his being. He closed his eyes and phased out of this world owned by humanity and into a world no one wanted to see. The walls of rock were dark with soot and the ground scorched the soles of shoes. As he walked, the heat caused the rubber to hiss as if you had dropped water into a hot frying pan. He hardened his heart to the screams of torment around him, the pleas for mercy or even a drink of water to quench eternal thirst. Had he shown any compassion the consequences would be dire for him and for the person whose plea he answered. No, it was better to pretend he did not see the bodies chained to the rock walls or hear the lashes from Qumuel’s whip against the flesh of his captives as he passed.

“What took you so long, Caim?” The snarl came from the demonic lips of Belial.

His face was almost flawless in its beauty but it belied the pure evil hiding underneath. There was no one more malevolent; more filled with hate and destruction than Belial. Caim had long stopped fearing him; he looked at him now with total disinterest.

He leaned his shoulder against the steaming rock wall; it burnt a hole through the fabric of his black shirt down to his skin. It burned his flesh but Caim did not even wince. Such was the life of a fallen angel in hell.

“So no answer?” Belial asked.

“Why should I give you excuses, Belial? You are not my master, you only dispense assignments. You are basically a secretary. And as soon as I was summoned I came.” Caim replied mildly. It gave him great pleasure to see the flaming anger turn red in the demon’s eyes.

“Your insolence will not be forgotten. One of these days my revenge will be swift.”

“Said the demon to the fallen angel who lives in hell with him.” Caim scoffed unconcerned. “Why was I summoned? Give me my assignment, secretary, and go back to making coffee.”

With a snarl reminiscent of a lion’s roar Belial was on his feet. His tail lashed the desk in front of him and spilt it in two. Black ooze flowed from the wood and talons sprouted from Belial’s hands. Gone was the perfect man. Now, the face of a demon was visible and pure in its hate.

Caim took battle stance. From his back, black wings ripped their way through the fabric of his shirt. In his hands appeared a black sword. If Belial wanted a fight he would give him one, feathers against scales.