Can Bleu get over his fears to make his dream romance come true? 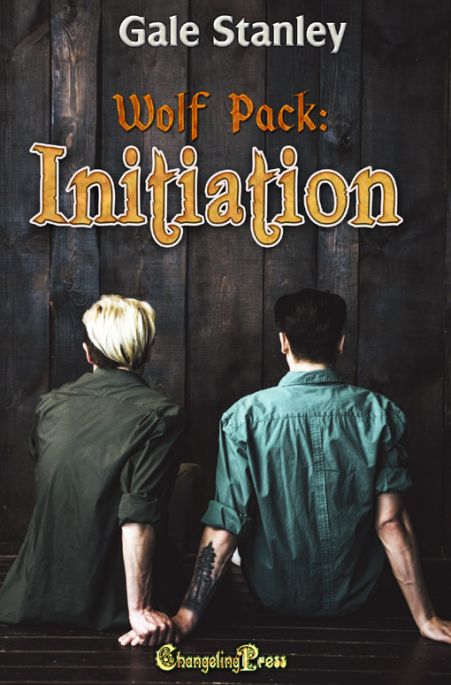 Bleu has always lusted after Grey, but Grey isn’t interested until he pledges Agéli Lýkon in college. The wolf pack fraternity says he must choose a human and bind him for life. Animal instinct tells Grey that Bleu is his for the claiming. But will Bleu want to spend the rest of his life in submission to a big bad wolf?

Bleu Davis often wondered if destiny had brought him and Grey Davies together.

Although they were polar opposites, Bleu and Grey became best friends. Propinquity, their parents decided, the tendency for people to form friendships with those whom they encounter often. After all, they lived on the same street and their mothers became pregnant at the same time. The boys were born on the same day and both were named for the color of their eyes. The two families became inseparable. Play dates were arranged and often the families traveled together.

Grey and Bleu’s birthdays and surnames insured that they attended the same classes from kindergarten through middle school. In high school, they started drifting apart. Grey developed into a talented athlete, good in every sport. He was intelligent as well, but preferred to spend his time partying or playing sports. He relied on Bleu, the unathletic scholar, to help him keep his grades up. Grey took advantage of Bleu’s kind nature in other ways as well, repeatedly asking for favors, without returning them or showing gratitude.

Grey’s ego grew as big as the Keystone State. Sometimes he was obnoxiously arrogant, demanding what he wanted and pointing out Bleu’s flaws when Bleu couldn’t deliver. Bleu accepted this treatment, just as he accepted his place as sidekick to the more popular and charismatic Grey.

Bleu knew he was being taken for granted, but he never refused Grey. He felt Grey was destined to be an important person and his needs were more important than Bleu’s. But the real reason was harder to face.

Bleu had feelings for Grey, but he’d been suppressing them for a long time. He couldn’t accept the fact that he might be gay. After all, he dated girls, and had even kissed a few. The kisses were mechanical. “I just haven’t found the right one yet,” Bleu told himself.

But the person Bleu thought about when he masturbated was Grey. He’d imagine himself kissing and touching his friend until he got an erection. It didn’t take long. Then he’d stroke and tug until he came. It felt good, but it didn’t make him happy, because he knew Grey would be disgusted. He always promised himself he wouldn’t do it again, but it didn’t change anything, because what he really wanted, what he really needed, was Grey.

Then one night they were studying in Grey’s bedroom and Bleu almost revealed his secret.

Bleu was lying on Grey’s bed, his head propped up on two pillows. Programmed to echo Grey, he muttered, “Yeah, me too.” But he kept his eyes on his book.

Grey grabbed Bleu’s book and tossed it aside. “Great. Let’s jerk off.”

Bleu was shaken to the core. He made a grab for his book. “Stop messing around. I have finals tomorrow.”

“And trust me, you’ll concentrate much better after you come.”

Bleu’s face heated. “That’s private. Something I do at home alone.”

“But it’s more fun doing it with somebody.” Grey gave him a sly look. “All the guys whack off together. It doesn’t mean they’re gay.” He paused, waiting for a response.

Bleu feigned disinterest. “I’m not in the mood.”

Grey pulled off his jeans and then climbed onto Bleu and straddled his hips. He unzipped Bleu and had his cock in his hand in less than five seconds. “See, you’re hard already.”

Part of Bleu wanted Grey to stop, but the other part wanted this to go on forever. He made a halfhearted attempt to shove Grey off. “Stop playing.”

Grey tugged on Bleu’s cock. “You like this, don’t you?”

How could Bleu deny it? His dick was throbbing and he was already leaking precum.

Grey rubbed the pearly drops of fluid over the head of Bleu’s cock and down the shaft. He fisted Bleu’s cock and slowly stroked the length. A whimper escaped Bleu’s throat and his hips arched.

“Nice.” Grey murmured. “Now you touch my dick the way you would touch yours.”