Lovers in the desert fight for their lives against legends,
wild men… and wolves. 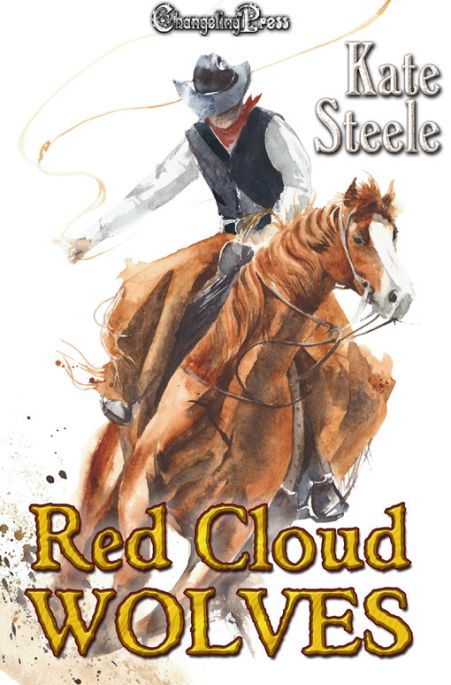 Almost a century ago Landon Jeffers was on the run from a posse determined to see him dance at the end of a noose when he made a discovery that would change his life forever. Landon’s dreams of desert’s riches morphed into images of moonlit nights, howling wolves and a man whose piercing black eyes turn to fire. A wild man who will tame his heart — a man named Dark.

Over the years legends have taken shape about wild men inhabiting the Grand Canyon — men who turn into wolves. Now Landon and Dark will need every bit of courage they possess to preserve the existence of the Moon Wolf. It’s up to them to stop a killer — one who’s been holding a grudge for a very, very long time…

As was common in many saloons, the wall behind the bar shone with etched and polished mirror. Rows of glinting glass and bottles filled with whisky, rye, bourbon and the like marched along the low shelves built beside and beneath it. Lan sidled up to the bar and ordered a whiskey. With glass in hand he turned to admire the sight before him. Now this, he mused, feels just like home.

It wasn’t long before he was concentrating on the tables where card games were in progress. At one such table, a man rose. Tipping his hat at those assembled, he walked out of the bar. Another man seated there, at least part Spanish by the look of him, caught Lan’s eye and with a short move of his head indicated the empty seat. Lan sent him an answering nod and joined the other players. Seating himself with little fanfare, he bought into the game, was dealt his first hand and the play began.

For the first couple of hours the game went well. He won his share of hands and had a nice stack of chips in front of him. His fellow players were all obviously experienced but unaware of the fact that they were giving away their hands in subtle ways. As the game progressed Lan was learning their tells. One player would narrow his right eye just a bit when bluffing. Another would tug the corner of his mustache when he had a good hand. Ever so slowly, small bits of body language began to betray each players’ mood and if he held good cards or bad.

One of the bargirls had taken a shine to Lan and made frequent stops at his table. Susie waited on Lan before anyone else and gave him sweet come-hither smiles and meaningful looks from big brown eyes. She also managed to show him quite a bit of her bosom in the process. Lan gracefully bore her attention, not about to enlighten her in this roomful of strangers that he preferred his partners a hell of a lot more flat-chested. And male. This pretty girl was sporting all the wrong equipment to engage Lan’s interest, unlike the fresh-faced cowboy across the table. Lan could definitely see himself letting that beefy, blond-haired, young man ride his cock. Putting those thoughts aside, Lan kept his mind firmly on the game.

It was in the early hours of the morning that the trouble began. Lan had begun to suspect it for quite sometime but the last hand had proved it for sure. The duded up swell who acted like he owned the place was cheating. Lan threw his cards in before the hand began and started to gather his money in spite of the protests around him.

“I got nothing against losing, but I won’t play with a cheat,” he told them. His words brought a quiet hush to the table.

“Who are you accusing of cheating?” the dude asked.

The man sat there bold as brass and slowly nodded his head. “You don’t know who I am, do you?”

Around the table chairs were pushed back. The tension quickly spread to the neighboring tables until they had an audience looking on with anticipation and dread.

“Would that make a difference?”

“And that should mean what to me?”

“My brother is Daniel Coburn, Marshal of Calico. We own this town.”

Lan felt a slight frisson of dismay which he more than adequately hid behind his calm demeanor. Every nerve in his body was trying to dance with the rising stress that winged through his veins and tightened each muscle in tiny, nearly invisible increments. This situation was far from unfamiliar but he didn’t carry a gun for show. With composure only the best of his breed could exhibit, Lan put his life on the line.

“Do tell. Well, Mr. Coburn, where I come from a man wins at cards with luck and skill, not by intimidation and most definitely not by cheating. I don’t give a damn who you are. No double dealing braggart is lining his pockets with my money.” Lan rose to leave.

Across the table, in what seemed like the blink of an eye, Roger Coburn stood. His chair tipped back and fell. There were screams. Men and women scrambled to get out of the way. A gun appeared in Coburn’s hand as he drew it from his holster. Without stopping to think about it, Lan answered the threat. Two revolvers fired. One found its target, the other didn’t. Coburn gasped and grabbed his middle, blood blossoming and spreading against his shirt in a flood of red. With a look of astonished disbelief on his face, he fell to the side, dead before he hit the floor.

Landon didn’t need any encouragement to get moving. Smoking gun in hand, he grabbed his money up. Keeping a wary eye on those around him, he crossed the floor and was out the door and gone. He didn’t question the need for haste or the need to run. That Coburn had had the bald-faced gall to expect his cheating to be overlooked just because his brother was the town marshal boded ill. From the sound of it, this wasn’t the first such incident. Apparently the marshal backed his brother. More than likely he wouldn’t take kindly to someone killing the man, even if it had been a fair fight.

Walking swiftly to the hotel and entering, he took the stairs two at a time. Once in his room, he stuffed his belongings back in his saddlebags and was back outside in seconds flat heading for the livery stable.

Cursing the darkness, he fumbled in his saddlebags for matches and lit one just inside the stable doors. A lantern hung nearby and he lit the wick then made his way down the line of stalls, quickly finding his horse and tack. The roan gelding blew and stamped, disgruntled at being disturbed but he held steady while Lan got him saddled and bridled. Around him the other horses answered with low whickers. After adjusting his gear, reins in hand, Lan led his horse to the doors and replaced the lantern after carefully extinguishing the flame.

Heart pounding, he paused and listened. In the distance he could hear shouting. Without wasting another second, he was out the door, leading his horse. It was still dark and he wasn’t about to risk injury to the roan. Taking his bearings, he started in an easterly direction and was soon out of town. So far there was no sound of pursuit. The ground rose steadily as he went. Glancing back he could see lights flitting around town like fireflies. They were searching for him.

Grimly, Landon turned his back and kept walking. When the sun rose high enough to make the landscape visible, he mounted up and headed east, intending to put a lot of miles between himself and Calico.

“I want to improve.” This has become my mantra. I think of my authorial skills as a work in progress. I began with no formal training and no degree, just a need to tell a story. I hope, as time goes by, my ability as a teller of tales will improve to the point where, from beginning to end, the reader can immerse her/himself in the world I’ve created, live, laugh and cry with the characters born of my imagination and emerge satisfied and hopefully even happy with the experience.

As for the boring details, I revel in the quiet life of rural Indiana with family and pets. When not writing I read, garden (battle with weeds) and on warm summer nights sit on the front porch to watch Mother Nature’s fireworks. I think fireflies are pretty and pretty amazing, don’t you?

Feel free to direct questions, complaints or compliments (fingers crossed) to katesteele27@yahoo.com or visit my website at www.katesteele.com.