When Michael mates with a lusty hawk shifter he knows it’s for life.
But Garrett has other plans…… 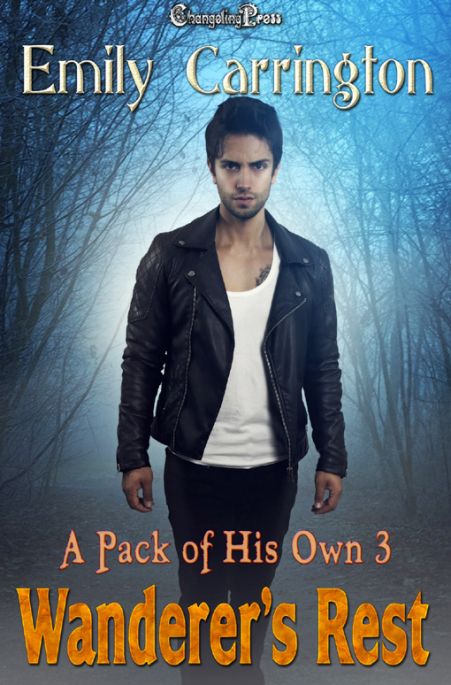 When Michael has sex with a lusty hawk shifter, he thinks they’re mated for life. However Garrett isn’t one of Michael’s people, and he doesn’t understand the traditions — and very real consequences — that go with having a good time in bed.

Will their forced mating ruin their lustful desires, or feed the flames instead?

Publisher’s Note: This book is part of a series, and is best read in order.

Michael stood in the doorway to the bedroom where the unmated wolves of the eros pack to which he belonged slept. An eros pack was different from a straight one. The latter was, traditionally, composed of straight wolves who were full citizens, and LGBTQ, psychic wolves who were not. Eros packs had originally been invented to establish a place where psychic werewolves could be equals.

Michael scowled down at the body. His mind was taken up with werewolf history — namely description of packs — because he didn’t want to think about the task ahead: finding the assassin. Outside, the second or third snow of January was falling, but in here it was hot and the heat boosted the stench of blood, shit, and urine.

The wolf lying on the floor hadn’t been killed here. The drag marks left in the carpet were all too evident. So, the question was: where had he been killed? And who had murdered him?

Michael found himself praying that the murderer was from outside the Rowan pack even though the placement of the body made that unlikely. If the culprit was from within the Rowan pack —

But Michael cut off the thought cleanly there. This wasn’t the Rowan eros pack any longer. Rowan Alec was just over six months dead. This pack had no leader besides Michael, Rowan Alec’s beta, and no name except “formerly known as the Rowan pack.”
The artist formerly known as Prince. In spite of the situation, Michael smiled. It wasn’t as if he’d liked the wolf who had died. A troublemaker and an upstart, Joseph had been a thorn in Michael’s side even when Rowan Alec still lived. Too submissive to be a serious threat to most of the dominant wolves, Joseph had always been starting fights with the wolves ahead of him and the ones just beneath him in the pecking order.

Well, now someone had ended his troublesome existence and Michael wasn’t sorry to see him gone. But death in the pack meant danger, and he would not see this pack — Alec’s pack — fall apart. And besides, he thought as he began to follow the drag trail toward the back of the Rowan pack’s large, single story house, someone deserved to pay for Joseph’s death.

The trail of blood and other bodily fluids led outside. Michael trudged, barefoot and uncaring, into the snow. About three dozen steps from the house, close to the fence at the back of the property, he found the killing ground. It was mashed snow and mud, blood and gore. Michael couldn’t fathom why those who had killed Joseph had bothered to move his body into the house. After all, this was just as good a place for a corpse as any.

Unless, he thought, they wanted me to find it when I came in to do my daily check on Henry. The most submissive of Michael’s wolves, Henry had been slipping away little by little over the past half a year. Spending as much time on four paws as on two feet, Henry had been fired from his job for missing too much work. He’d stopped bathing on a regular basis and there was an unhealthy dullness to his fur. Michael had taken it upon himself to check on Henry every day when getting home shortly after five, and he usually found the submissive in the bedroom shared by the five — well, now four — unmated wolves.

Actually, there were still five, Michael being the fifth. But he’d reluctantly taken over Rowan Alec’s bedroom. Not because he thought he deserved it but because it was the expected thing. Rowan Alec had been unmated, but as alpha it was his prerogative to have his own room. And since Michael had stepped into Rowan Alec’s place, it had made sense to take over his space as well.

— unmated by choice. Michael was disturbed by the thought that his alpha had loved him. Maybe it shouldn’t bother him now that Rowan Alec was gone but it did. Not because Michael wasn’t attracted to male wolves; he was aroused by both genders. But because, frankly, Rowan Alec had been too dominant to be Michael’s type.

Forcing himself back to the present, Michael scented around the killing ground until he discovered the identities of the two wolves who had teamed up to kill Joseph. They were wolves in the Rowan — in Michael’s pack, and he sighed. He would have to deal with them. He needed to find out why they’d killed Joseph. They were just above him in the hierarchy. Surely no matter how offensive Joseph hadn’t deserved the ignoble fate of being set upon by two wolves more powerful than he. Any fight that had reached killing level should have been brought to Michael to settle.

I hope none of our neighbors saw the murder. Especially since Joseph was in human form when he was killed. Michael would have to call in professionals, SearchLight operatives, to clean up any loose ends, meaning humans who had seen too much. At least I know the right SearchLight agent to call.

Michael trudged back toward the house after considering the killing ground for another moment and deciding he’d have to ask the cleanup crew to take care of that as well. The only good thing was that the wolves who had killed Joseph weren’t in the house. Michael wouldn’t have to deal with them until they got home.

Assuming they come home. He sighed. That was a bit of food he wouldn’t chew until he had to.

He found himself wishing those specific wolves would do something stupid and force either SearchLight or Firos William, leader of all North American werewolves, to end their miserable existences. Just so I don’t have to kill two friends.