Three stories of heartbreak, passion, and magic in the mountains of Appalachia. 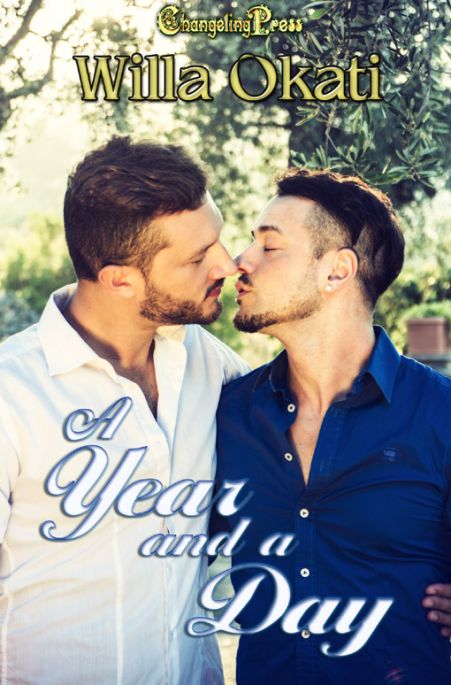 A Year and a Day: Nothing is going to stand in Slate’s way when it comes to getting his lover Ash back. He plans on using unfamiliar magics to call Ash back to his side — but magic always comes at a cost.

Unspoken: Once a famous vocalist, Ian has become mute for reasons no doctor can explain. At a low point, Ian encounters a strange man in his garden — a wandering musician, like the bards of old times. Andy teaches Ian love itself is one of the greatest forms of expression.

The Letter: It’s been hard, but Luke and Brandon have decided to part so Luke can follow his New York dreams. The lovers question that decision when they discover a chest of letters in their attic containing details of their relationship down to the last moment — except these letters were written in 1948. Should they reconsider their choices? The answer is in the final letter…

All rights reserved.
Copyright ©2018 Willa Okati
Excerpt from A Year and a Day

Six o’clock in the morning, and the sun was just beginning to glow over the horizon. Faint whispers of red and pink light crept through Slate’s bedroom window, painting stained-glass pictures on his ceiling. He lay awake on top of the covers, staring at them. “You know, there’s folk who say they see the face of the Virgin Mary in a squash,” he said out loud, to himself. “Wonder if I look hard enough, I’ll see my lover’s face in the sunlight?”

He snorted. Fool’s dreams. A year since Ash had died, and he still woke up every morning expecting to see that tousled dark head lying on the pillow next to his. Every night, he dreamed of the two of them in that same bed, arms and legs tangled around each other, limbs straining as they made love. Slate let his eyes flutter half-shut, imagining he could feel Ash’s strong young hands skating over his skin, laughing about measuring him by spans. He licked his lips, fancying he might be able to taste the salt.

No. Nothing. Just his own flavor, that of a man who’d brushed and swished before falling on top of his bed sometime around three a.m. Sterile, minty, lonely as hell. He’d trade any number of fresh morning breaths for one kiss from Ash, breaking apart to laugh about who ate what the night before.

No more kisses from Ash, anymore. No more anything.

The sunlight grew stronger, stretching across Slate’s ceiling. In times past, he’d have had a rooster out back, lord of the coops, standing on top of the henhouse and letting out a mighty crow. There were those who said that was an old wives’ tale, but they hadn’t met the ugly old beast he and Ash owned.

He’d sold that critter not long after… after… Well, mornings were hard enough to face. Almost as bad as the nights. Daylight meant another night without sleep, meant another day to get through without his lover.

Turning on his side, he stretched one arm across the smooth expanse of made-up covers beside him, not mussed in the least. Blankets tucked in smoothly, pillow plump and fat. Ash’s side of the bed. A year to the day, and he wasn’t able to bear sleeping in the middle, or even crossing sides of the bed. He had tried, once. Lain in Ash’s place, hoping he’d have a good dream.

Hadn’t worked. He’d seen that day in the barn over and over inside his mind, so crystal clear in his thoughts as if it were happening all over again. Ash, gasping for air. Ash, falling. Himself, down on the hard-packed dirt, Brown Sugar getting all agitated and kicking her stall. Finally remembering to call 911.

Firemen. Paramedics. His friend Marianne and her lover Zillah trying to draw him aside, and when he wouldn’t go, being muscled back by two big, strong men in yellow suits. Sinking down on a bale of feed and feeling their soft, womanly hands on his back, his shoulders, trying their damnedest to soothe. He hadn’t paid them a bit of mind. Everything in him had been focused on Ash, lying so still… so still…

Someone in a uniform had come to talk to him after a spell. He could still remember the man’s words, letter-perfect. “I’m sorry, Mr. Kincaid. Slate. He’s young, but best as we can tell he had a heart attack before he fell. It does happen to some men this young. Do you know if he had any congenital heart defects?”

Slate had shaken his head, baffled. “No… not Ash… he was fine. Never said a word about anything wrong with him.”

“He might not have,” the uniform allowed. “The fall did break his neck, though. There’ll have to be an autopsy –”

There Slate had lunged up from where he sat, raging at the man telling him this news in a voice schooled to be soft and sympathetic. Liar. He hadn’t felt a damn thing. “You’re not cuttin’ him up.”

Marianne and Zillah had managed to drag Slate back into a sitting position, and they’d held him there. Strong for women, they were. “I’m sorry for your loss,” was all the uniform had said, before he went back to the scene of the… where Ash lay, cooling off in the dirt.

Slate hadn’t cried then. He still hadn’t, one year later. His eyes burned with the need to, but no matter how many times his lady friends offered their shoulder, he hadn’t been able to coax out a single drop.

Grieve, they’d told him. You have to mourn him, Slate. Otherwise you’ll never be able to let go.

Damn them. He didn’t want to let go. And as long as he had reminders, he wouldn’t have to.

Rolling over again, he reached out to touch the leaves of a pretty plant on his bedside table. Glossy green leaves shaped like hearts, bell-like flowers. Foxglove. Digitalis. “You did have a heart problem,” he whispered. “And you didn’t tell me. I think I might just hate you a bit for that, Ash. Always had to be messin’ around with your herbal medicaments. So sure you had it under control.” His hand tightened into a fist. “Didn’t you know you can’t fix something like this without goin’ under the knife? Did you really think your herbs and your potions would fix it all? Damn you, lover. Why didn’t you tell me?”

But as when he’d asked those questions, every single morning as he rose out of his bed, there were no answers. There wouldn’t be, either. Dead men didn’t talk.
No matter how much one might want them to.

Ash’s radio kicked on as the time ticked over to six-fifteen. Dimly, Slate knew he should have been getting up, too, but damned if he could find the energy to rise. Still fondling a leaf of the foxglove between his fingers, he listened to good old Patsy Cline singing about how she was crazy, crazy for feeling so blue. He thought — not crazy at all. It’s hell to be by yourself when you were promised forever.

He closed his eyes and remembered a certain morning when Ash had been the first to wake. Slate had still been asleep, drowsing past the sunlight’s first peek into the sky. Normally he was the one to rise earliest, but not this time. He remembered Ash’s warm arms sliding across him, the man molding himself to Slate’s side. They’d been playing Elvis that morning. “Love me tender,” Ash had sung into Slate’s ear, following it up with a nip to the lobe, then soothing the sting with the tip of his tongue. “Love me true…”

Now, he woke in the same clothes he’d laid down in, on top of the covers instead of beneath them. Woke, if he’d slept at all, which to be frank, he hadn’t. Is this grief? he wondered. Is this mourning? The women push, push, pushed at him. But he had to deal with things in his own time, at his own pace.

Besides, he had some secret, certain plans they didn’t know about…