The Christmas holiday brings Aaron no hope for his art, but Jason does. 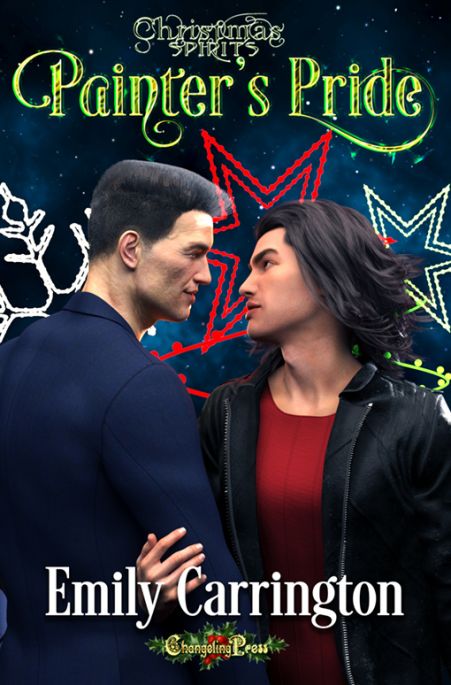 Jason and Aaron have been together since Aaron was a freshman. Now Aaron is a senior and getting ready to pursue his art career in NYC. But Aaron, growing up poor, can’t quite believe that anyone would want to help him support his talent – not even his lover, Jason. As they near the holidays, Aaron sinks into despair.

Jason believes in Aaron, but his boyfriend’s refusal to let him help is pulling them apart. Will the season of hope bring them together or will it destroy their love forever?

This short story is part of a much longer series tentatively called Year of the Queer. This first installment doesn’t have the series title because it also works great as a stand alone.

Over twenty years ago, I began the series of which Painter’s Pride is the first book. I started these books with a simple idea: what if LGBTQ people from all over a certain geographical area all had one touchstone: a drag queen named Griffin whose own dark past leads her to seek out other broken souls? The series, when complete, will include the following: two full-length novels and five or six novellas. In addition, there will be other “shorts” like Painter’s Pride centered around the holidays in the lives of the characters.

Here’s a little about the one novel and novella that are finished and should be published in 2019:

First story: The Prince and the Painter: This is the story of Jason and Aaron, the couple from Painter’s Pride, and how they find each other during Aaron’s first year of college.

Blurb: Aaron Spencer grew up keeping secrets. The depth of his family’s poverty is the least. When his boyfriend-in-the-closet is murdered and Aaron is raped by one of the murderers, he buries it in the hopes that if he leaves town, he’ll be able to put it all behind him.

Jason Cooper also lost a friend to that murderer. Fully living in the sunlight as a bisexual man, he is taken by Aaron’s grace and androgynous beauty at once. He raws the younger man to him and together they begin a new life.

But the man who raped Aaron still wants him—and this time he means to keep his prize. Can Aaron and Jason triumph over such despotic lust and come to their own love?

Second story: This second story, a novella, is finished but has no title as of yet. (Titles are one of my weaknesses and I may turn the finding of a title into a contest.)

Blurb: Krys is trans, f2m. Krys has cancer, although it is in remission. When he meets an oncologist-to-be who is sexy, passionate, and kind, Krys falls for him immediately.

Daiden enjoys Krys’s company, but Krys’s lingering belief that he’s going to die and leave Daiden as others have left both men in the past makes it impossible for him to truly get close to the person he dreams of day and night.

Jason Cooper slung his satchel over one of the sturdy pegs of the oak coat tree. That piece of furniture had been a gift from his brother, Chris, who ran a carpentry business back in their hometown of Lilacville, New York. It could hold at least three heavy bags without tipping over. Jason and his two roommates had repeatedly tested that claim and never found it false.

“So?” one of his roommates, Daiden, asked as he poked his head out of the bedroom he shared with his husband, Krys. “Was your scouting venture successful?” Tousle-haired and bleary-eyed, he’d clearly just woken up. Considering his usual twelve-hour shifts as one of NYC’s best oncologists, Jason didn’t blame him for sleeping in the middle of the day.

“Where’s Krys?” he countered as he kicked off his sandals and left them beside the coat tree. It was a Saturday; he should be home.

“Last I knew, he was going shopping. He said we needed to make a good impression on your guest.”

Good impression. Yeah, right. Krys and Daiden had done nothing but needle Jason about his two-year, long-distance relationship with Aaron. Not because they didn’t know and like Aaron but because… Well, each had his reasons. Krys thought Aaron would miss living in the country too much to ever settle down in Manhattan. Daiden was of a mind that Aaron was too “proud about being poor” to ever live in a vaulted-ceilinged, hardwood-floored apartment with Jason. “The only way he’ll ever settle in is if he strikes gold with his paintings first thing.”

“I got the tickets. Are you sure I can borrow your picnic blanket?”

“Absolutely. And the hamper too. There’s nothing like sitting out under the sun in Central Park and enjoying a little al fresco lunch.”

Jason was fully aware of the tension crawling up the back of his neck. Even though the tickets had been free, it was a “donations expected” concert put on by the Philharmonic. All proceeds would go to Manhattan’s underprivileged schools for their music programs. Ninety percent of the public institutions in NYC were disadvantaged. Jason worked at one of these schools. Not only had his choice two years ago given him a trial by fire, but his student loans had been forgiven.

He would simply have to find a way to slip the orchestra money without Aaron knowing how much. Because Aaron would only be able to afford a dollar or two.

Jason went into his bedroom and shoved everything in the closet over to the left. Then he began extracting hangers. Aaron was as much of a neat freak as he was; it simply wouldn’t do for his week’s worth of clothes to be crammed into the suitcase during those seven days.

Aaron didn’t visit often and, because of his school schedule, neither did Jason. But now Aaron had said he was ready to take the plunge. After his final semester of school in the fall, he would be moving in with Jason, Daiden, and Krys.

Jason could hardly be more thrilled by the prospect. Just so long as Aaron’s “I have to pay for everything myself” streak of pride didn’t drive him crazy, he could see them settling down together happily. He’d loved Aaron since nearly their first meeting and he could only see joy in any future they made together.

Once he was done preparing the closet, he triple-checked his nightstand for condoms and lube. For six months after Aaron had been raped, they’d used condoms in case the monster had AIDS. They’d both started to enjoy not having to change the sheets as frequently.

Only when he was ensuring that all the squares in his quilt were perfectly straight and flat did Jason admit he was trying to kill time before Aaron’s bus arrived. The fact that Aaron wasn’t coming until tomorrow underlined Jason’s nervousness. Aaron had seen this room in its summer neatness and its mid-school-year disorder. Yes, but last time he wasn’t getting ready to move in here. I want to show him my best face.

Jason had always asked him to wait in the bus station. Today especially Aaron didn’t mind since he had luggage and it was ten blocks to Jason’s house. On those occasions when Aaron’s bus got in before sunrise, he understood his boyfriend’s caution.

He really didn’t mind waiting for Jason under normal circumstances. It was just the guy scoping him out from three chairs down. He’d gotten on the bus about an hour before this final stop and he’d sat next to Aaron. There hadn’t been many other open seats so Aaron hadn’t argued. But the guy reeked of cologne and he kept trying to chat Aaron up. Once they’d reached their destination and Aaron hadn’t given the man more than his first name and the news that he was going to visit his boyfriend, he’d assumed that would be the end of the matter. But here the dude was, actually approaching him with a sneaky little grin.

He plopped down right next to Aaron, nudging Aaron’s foot with his boot. “Yeah, you know, your ‘boyfriend’” — Aaron could hear the sarcasm quotes –”isn’t here yet. We could go get a cup of coffee.”

Aaron pulled his suitcase closer. He wasn’t really afraid the reprobate would steal it, that didn’t seem to be what he was after, but having the luggage close made him feel safer. “No thank you. Jason will be here soon.”

“If he really loved you, he would have been waiting.”

Jason usually was waiting. Aaron felt a twinge of unease. Not that he believed Jason didn’t love him but it was so unlike Jason to be late for anything.

The hand on his knee startled him. And when it scooted higher, he stiffened.

Aaron got up, stumbled over his suitcase, and almost fell. Did he look that poor?

“Whoa.” The man was right after Aaron, catching his arm in an iron grip. “Relax. I can’t be the first guy you’ve blown for cash.”

He did think Aaron was that poor. Or that he looked like a prostitute.

“Aaron!” Jason shoved his way between them, acting like he didn’t even see the jerk, although he did take the time to discreetly break the hold on Aaron’s bicep. “I’m sorry I’m late. My alarm didn’t go off.”

Aaron forced himself not to sag against his lover. He looked at the man — and saw him slinking away. Aaron glanced down and saw his suitcase was still where it belonged.

Aaron nodded. “I just… Some guys don’t know no means no.” He decided not to tell Jason he’d been mistaken for a prostitute. He wasn’t wearing anything revealing, although his jeans were a little tight because he found that style the most comfortable.

He squeezed his boyfriend’s hand. “Let’s get out of here.”

He’d seen the inside of Jason’s apartment before, of course, but Aaron couldn’t help seeing it with fresh eyes. In less than six months, he’d be living here. The hardwood floors, the crown moldings, the built-ins… this place was too beautiful for the likes of him.

That’s not quite true. I deserve as much as anyone else. I survived Vance’s attacks and kidnapping as well as Isaiah’s attention. It’s just that I haven’t earned this yet. Maybe I should have tried to become a teacher.

“Aaron!” Daiden appeared, grinning. He was dressed for work already and had his lunch bag in one hand, his briefcase in the other. “Glad you made it safe.”

Krys was just behind him, dressed in a conservative suit. He’d stopped teaching at State University of New York’s Besker College in favor of working for the United Nations full time about a year ago. He looked good. His second bout of cancer must be abating. He grinned at Aaron. “You looked a little peaked.”

Aaron tried to shrug it off. “Getting up at one to catch a bus at two is a little rough,” he admitted.

“Jason has all summer off,” Daiden said as he headed for the door. “You could have taken a later bus.”

Which would have been more expense. “I don’t mind,” he answered.

Krys and Daiden disappeared out the door.

And Jason came to Aaron’s side, taking his hand and kissing it. “Are you really okay?”