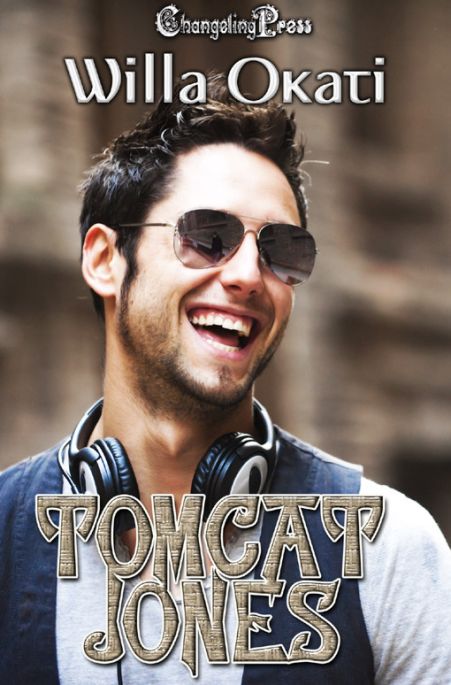 Tomcat Jones: Shape-shifting tomcat T.J. Jones never believed in love — until he runs into MacGowan, a smoking-hot beach boy with an open heart and a sweet smile.

Buddy Holiday: T.J.’s a man with a plan. He intends to ask his wizard lover MacGowan to officially move in with him and make this the best Festivus ever. He keeps getting distracted by MacGowan’s hot bod. Happy Holidays?

Karma Chameleon: Arden needs Shavey’s help breaking a chameleonic shape-shifting curse. There are a few things big bad bear Shavey would like to ask for — and intends to prove to Arden — in return.

Publisher’s Note: One of Willa’s funniest. Best not eat or drink while reading!

Arden gave the grocery cart a hard shove to get it past a sticky mess of spilled pickle juice on the aisle floor. “The hell it doesn’t. Are you stoned? That reminds me. Corn chips or Pringles?”

“Why limit ourselves? Doritos.” T.J. stretched up to tip the topmost bag on the shelf into their cart. It landed with a crunchy paft!noise between two cans of guacamole and a tub of sour cream. “Mmm. I can feel your arteries hardening as we speak.”

“Mine?” Arden, tall and skinny and towheaded, grabbed a jar of peanuts and read the nutritional information, snickering to himself. “Where are you in all of this coronary failure, standing nobly by with a skull in your hand, saying ‘alas, we hardly knew you’?”

T.J. had to stretch up on tiptoe to manage it but bounced his palm off the back of Arden’s head with a sharp snap of the wrist. “No. For one, you’re misquoting. For another, there’s no way I’m eating any of this crap.”

“Liar. You say you’ll stick to celery, but before we know it, you’ll be in the ranch dip and then the tofu chili wings will go down. It’ll be slaughter, I tell you. Wholesale slaughter of innocent soybeans. Ugh. Speaking of which, ranch dip or blue cheese? If I’m having a heart attack, I’m taking you with me, pal.”

“Yeah, yeah.” T.J. swung the cart around to face due south. “Black bean burgers. That’s what I want.”

“You are a disgrace to testicles everywhere.”

“If it’ll make you happy, I’ll eat two of them on a white bun, add three slices of cheese, and douse the whole thing in ketchup, mustard, and mayonnaise.”

“Soy cheese? How many things can they make out of one innocent bean?”

“You’d be surprised. And no, not soy cheese. Processed. American. Orange-colored glue. Mmm-mmm.”

“Never should have gotten you that word-a-day calendar.”

“Very Zen. Which is why, in the whole of God’s green creation, I don’t get a vegetarian cat.”

T.J. stopped the cart to grab Arden by the lapel and yank. “Not in public, jackass!”

His friend had the grace to look embarrassed. Not convincingly, true, but at least he made the effort. “I’ll lower my voice if you tell me how that makes sense.”

T.J. let go of him. Reluctantly. “If you’d ever woken up with feathers stuck between your teeth, you’d understand.”

“Huh.” Arden took control of the cart, mounded high with junk food, and pushed it forward. His forehead furrowed. “So you’re saying you prefer the all-processed taste of Chik’n instead?”

“God, no.” T.J. kicked the cart’s squeaky wheel, stuck on a shred of a coupon. “Anyway, what I was saying was that it’s a Hollywood myth, love changing people. If you even believe in love. A few chemicals swirl around in a guy’s brain. He might lie, but he won’t honestly become a different person.”

“And I was rebutting you. Successfully.”

“Random swearing does not a ‘successful’ comeback make.”

“Usually works for me.” Arden propped his hip on the cart. “And here all I’d said was ‘love makes people stupid.’ Interesting response to my normal state of running off at the mouth. Methinks I tapped a hot spot. Share with the rest of the class.”

T.J. scrunched his hair, the curly blond-brown mess overdue for a cut forever in his eyes, out of his face and sighed. “Do you remember the tabloid we passed a couple of aisles back? You know, the one left open-faced on top of the toilet paper display?”

Arden snorted. Eloquently. “The one that swore Prince William was an alien?”

“That too. It also had a giant red headline: ‘IS YOUR LOVE CHEATING? SIGNS POINT TO YES!’ Look at the divorce rates. Look at how many people break up right before Valentine’s Day or Christmas to avoid buying a gift. They might have thought they were in love, whatever they decide love might be, but they and the rest of us sorry folk are basically liars, cheats, and bastards who’ll do what it takes to get laid and then walk away without regret.”

Arden’s eyebrow climbed skyward. “Bitter. Nice. Who pissed in your cornflakes this morning? You actually believe that line of crap?”

“Damn right I do, and I challenge anyone to prove me wrong. Jeez, what did someone spill on this part of the floor?” T.J. tentatively toed the glutinous off-white goop glued to the linoleum beneath his feet. “Before you say it, Arden, I don’t think it’s spunk.”

“Given how much you like the cock, I’ll take your word for it. Which brings me back around to pondering the mystery that is your being a vegetarian c-a-t.”

“If you weren’t my closest friend, I’d be obliged to kill you. You know I have the…” T.J. lowered his voice, “shifting under control now. I haven’t slipped up in almost a year.”

“Uh-huh. So that wasn’t you purring in your sleep in the passenger seat on the way to the store.”

“I had to fight the urge to hang a bell around your neck and waft some catnip under your nose. It was adorable.”

T.J. looked at him. Silently. At length. Then, he moved on.

“I was kidding, you big dork.” Arden caught up. “Mr. Jontan wanted pizza rolls.” He put his foot on the cart to stop it rolling. “You’re a cat. Yeah, yeah, I know, shhh. You’re neat, clever, sweet when you purr, and you’re a sucker for being skritched behind your ears. Isn’t that love?”

“Nope. Have you ever known a cat to play affectionate with anyone unless they felt like it? Or who didn’t walk away as soon as they were bored? I know what I’m talking about.”

“Yeah, yeah, yeah. You’re not harshing my mellow, friend. I’m a hound dog all the way, and I’m a believer.”

“No, you’ll do anything that looks at you sideways and has a pulse. All you do, by existing, is prove my point. And hound dog, my ass. What you really want is a good master with a firm hand and a sack of treats. Admit it.”

“You keep telling yourself that.” Scoring a point over Arden made for the highlight of T.J.’s day. He pushed hard and sent the cart squealing forward to the end of the junk-food aisle, aiming for a freestanding display of bite-sized powdered doughnuts. “Who’s the king?”

His cart collided with the edge of one approaching at a perpendicular angle and ricocheted into the juice boxes. An oof came from whoever had been manning the assaulted cart.

“Fuck. I am so sorry.” T.J. jogged to the end of the aisle, ready to blame it all on Arden, who’d probably let him get away with it. What else were friends for? “Are you okay?”

The man behind the cart, rubbing his stomach where the cart had hit him, looked up at T.J. through casual tumbles of hair streaked glossy sepia and ebony. His eyes were as gray as summer storms, and they twinkled. “I think I’ll live.”

“Mphurgle,” T.J. said, caught in the spell of the scent of sand and surf, coconut oil and leather, and something spicy that the man carried with him.

The man’s grin broadened. He held out a hand for T.J. to shake, his wrist bedizened with knitted, woven, and small shell bracelets. Small tattoos trailed a line from pulse point to elbow. “MacGowan Smith. Haven’t I seen you around somewhere?”

MacGowan’s palm and fingers were slim and nimble, hands designed by nature for precision work. Was he a surgeon, a pianist, a painter? There was no way for T.J. not to imagine that agile touch skimming down his chest, his legs, over his hips, kneading his ass… and that was as far as that thought needed to go, or he really would get a boner next to the Freeze-Em Popsicles. That kind of thing was hard to explain away to random strangers, smoking hot or not, especially red-hot-chili “hot.”

Lucky for him, MacGowan hadn’t yet looked below T.J.’s neck. He snapped his fingers. “The DuBrewer complex. You live there too, right? I saw you and that guy behind you, upstairs from me, when I got my keys.”

T.J. replayed that in his head to make sure he’d heard MacGowan right. “You’re moving into L-one?” The empty apartment beneath his, ground-floor level, with a front door that opened on the foot of his apartment’s staircase. No way. No one got that lucky. Especially not a mostly vegetarian tomcat-slash-man, or the other way around.

“Me and no one else,” MacGowan agreed sunnily. He had a sweet West Coast accent, Napa Valley maybe. It added both drawl and lilt to his way of speaking. He eyed T.J. His good cheer softened and warmed around the edges. “I’m glad I was right. I’d hope there’s no way I could forget a man like you.”

“I should be all moved in by tonight,” MacGowan said. He wheeled his cart around. Chicken. Steak. Pork chops. Sausage. A six-pack of Pacific beer. One lonely zucchini in the middle. “Come by and visit, if you want.” He lingered over one last look before he turned to walk away, tipping T.J. a backward wave, shell bracelets clicking quietly. “Anytime you want.”

“Put your eyes back in your head and close your mouth before you start catching flies,” Arden muttered as he joined T.J. “You look like a constipated parrot.”

“Whatever.” T.J. stared after MacGowan. “Arden, what just happened here?”

“I’d say you got owned.” Arden studied MacGowan’s backside. “Huh. Not that I can blame you for drooling. I’d do him.”

“My point exactly. So he lives downstairs? How very convenient. Naughty neighbors, I like it.” Arden patted T.J. on the back. “This could be interesting. For me, especially. You know I get off on watching, baby.”

T.J. shoved Arden halfheartedly. “Put a cork in it.” He closed his eyes to better breathe in and appreciate the last traces of MacGowan’s scent.

He slapped a hand over his mouth while Arden, ever helpful, chortled. He slapped T.J.’s back. “Told you that you were purring on the drive in. Well, now. Life’s about to get a hell of a lot more interesting around here. Love at first sight is just swishy chemicals, isn’t that what you were saying?”

T.J. glared at him. He had a great insult on the tip of his tongue, but blast his luck, all he came out with was: “Purr.”

Interesting? Yeah. That’d be one way to put it.